The PHLX Semiconductor Index (SOX) tested 2019's major breakout above 20-year resistance in March and turned sharply higher, sustaining a long-term uptrend that could eventually post new highs. However, wide-range price action since February is likely to resist those lofty levels for months or years, warning shareholders to take partial profits during this oversold bounce or consider closing out long-term positions.

Of course, this is hard to do when the chip sector's most popular names are grabbing headlines for high-percentage April rallies. Even so, nearly all of these upticks mark simple retracements off deep lows, with greater odds at this point for multi-week pullbacks than continued advances to new highs. Fortunately, there's no rush to make a quick decision, so skeptical investors can watch how this plays out before taking decisive action.

Fibonacci retracements offer the most reliable road maps to price action following a vertical decline, especially when key levels narrowly align with unfilled gaps, major moving averages, and prior peaks. From a technical viewpoint, the coast is finally clear for a rally into a prior high when retracements mount the .786 level on a major index, like the SOX, or the most liquid sector components. 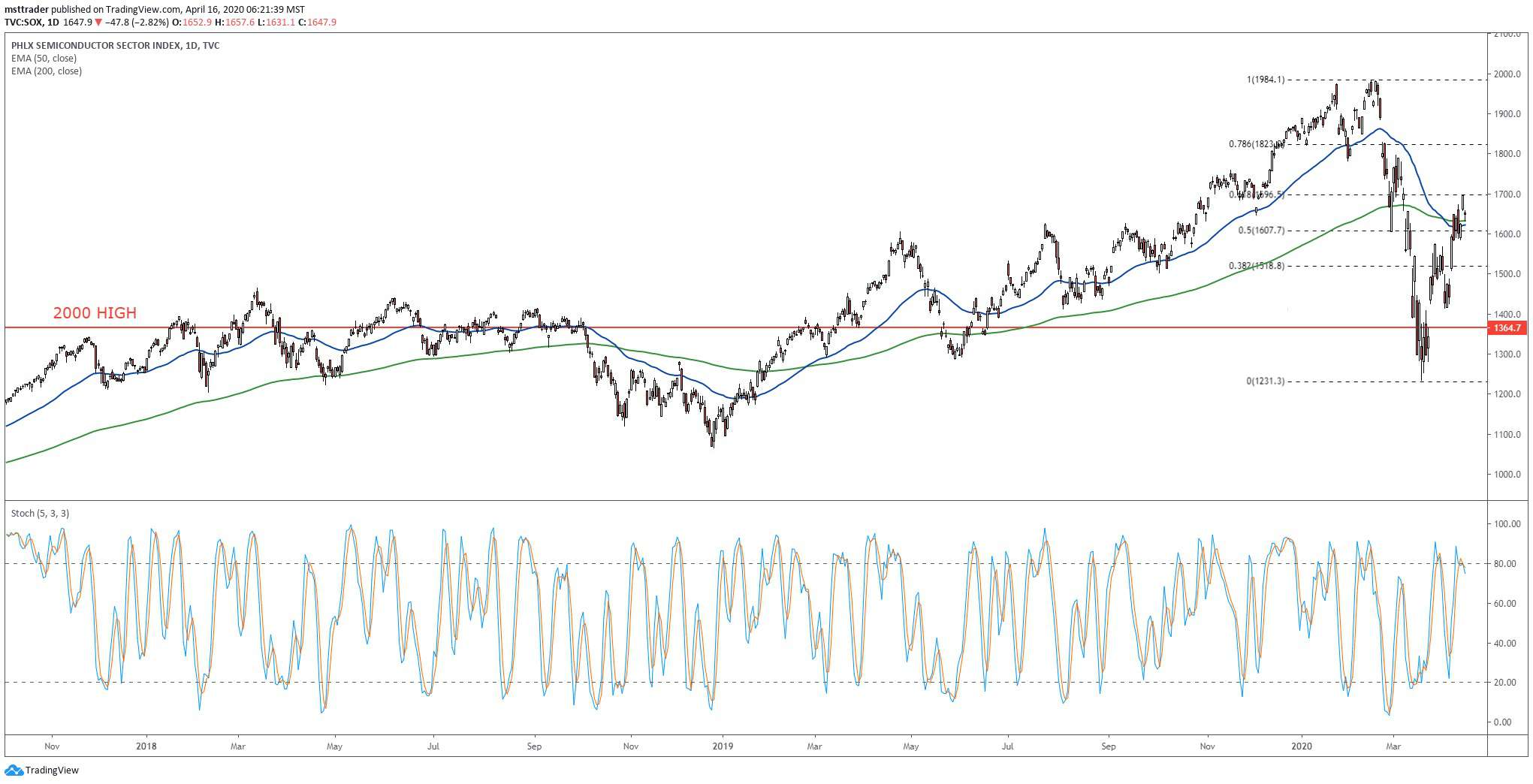 The PHLX Semiconductor Index completed a round trip into the 2000 high at 1,362 in January 2018 and entered a prolonged testing period that featured a decline to a 16-month low in December of that year. It posted a new high in March 2019, but mixed action continued into June, when the index entered a sustained advance, lifting into 1,975 in January 2020. It failed to mount that level in February, breaking down from a small double top before hitting breakout support in March.

The index undercut that level for a week and turned higher, marking another successful test of support. The rally has now mounted the 50- and 200-day exponential moving averages (EMAs) and reached the .618 Fibonacci sell-off retracement, which marks a high-odds turning point. However, unfilled gaps at 1,720 and 1,850 may generate magnetic attraction, lifting price into the .786 retracement just below the upper unfilled gap. It will take a breakout above that zone to brighten the mixed technical outlook.

NVIDIA Corporation (NVDA) took off in a powerful uptrend in the second half of 2015, driven by bitcoin mining mania, lifting into $293 in October 2018. The stock price plunged during the fourth quarter rout, dropping more than 57% into a 19-month low, ahead of a recovery wave that completed a round trip into the prior high in February 2020. A breakout failed after just five sessions, yielding a vertical decline that relinquished more than 40% of the stock's value into mid-March.

The rally into April has reached within two points of the .786 retracement level and failed breakout, raising the odds for a reversal. However, it could fill the February gap prior to a turnaround due to high volatility that's stretching common support and resistance zones. Remarkably, the on-balance volume (OBV) accumulation-distribution indicator has barely budged since the uptick began, generating a bearish divergence that increases the odds for a multi-week downturn.

Advanced Micro Devices, Inc. (AMD) stock topped out at $48.50 in 2000 after a long-term uptrend and sold off to a multi-decade low at $1.61 in 2015. It then joined NVIDIA in a new advance, finally completing a round trip into the prior high in December 2019. A January breakout hit an all-time high at $59.27 in February and reversed, failing the breakout before posting a four-month low at $36.75. The bounce into April reached the .786 retracement earlier this week, generating a test that may continue for a few sessions.

OBV looks much stronger on this stock than its rival and is probing a new high on Thursday morning. The stock has also filled all gaps created by the sell-off, generating a tailwind that could support new highs. It is hard to tell if AMD's good fortune will rub off on NVIDIA, with both graphics manufacturers attracting buying interest due to a surge in video gaming as a result of the nationwide shutdown.

Chip stocks are quickly approaching harmonic resistance levels that should trigger multi-week downturns. However, a few mavericks could post new highs as a result of competitive advantages created by the pandemic.