London (CNN Business)Europe fell deeper into recession in the first three months of the year, but the region’s economy is already turning a corner and looks set to bounce back as coronavirus restrictions ease.

EU GDP contracted by 0.4% between January and March, compared with the previous quarter, statistics agency Eurostat said in a statement on Friday. The economy shrank 1.7% when compared with the same quarter in 2020.
The decline follows a contraction in the fourth quarter of last year, when governments reimposed lockdowns to respond to spikes in coronavirus cases and deaths. Many restrictions remained in place during the early months of 2021, weighing on the economy.

Europe is lagging the United States and United Kingdom in recovering from the pandemic because problems with the supply of vaccines have made it difficult for policymakers to plot clear paths out of lockdowns. Relatively smaller government stimulus packages and a heavy reliance on tourism have also been a drag on activity.

But the European economy is beginning to show signs of life and experts expect a strong rebound as the vaccine rollout accelerates and restrictions ease heading into summer. 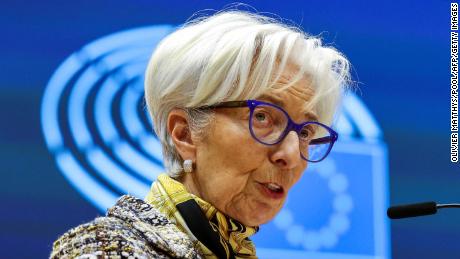 According to an estimate from data provider IHS Markit, business activity in April across the 19 countries that use the euro grew at its fastest pace since last July. “A record expansion of manufacturing output was accompanied by a return to growth in the service sector for the first time since last August,” it said in a statement last week.
Unemployment declined slightly in March and consumption has responded strongly to the slightest easing of restrictions, which is a positive sign of what’s to come, said ING’s senior eurozone economist Bert Colijn. “Consumers seem eager to spend,” he wrote in a note on Friday. “Domestic demand is set for a strong rebound when economies reopen.”
The manufacturing sector has also roared back to life and is mostly being held back by supply constraints, Colijn added.
Strain on global supply chains has made it much more expensive to move goods around the world and contributed to shortages of critical parts. German carmakers, for example, are grappling with a global chip shortage, which is expected to affect production and sales numbers this year.
Germany’s GDP shrank 1.7% between January and March after expanding in the final three months of last year. The decline was driven by weak household spending due to Covid-19 restrictions, according to the country’s statistics office Destatis.
France’s GDP edged 0.4% higher in the first quarter, helped by increased business investment and a boost to household spending, the country’s statistics office Insee said.

“It looks like the fate of the eurozone economy is about to turn,” Colijn said. “While late out of the starting blocks, the eurozone is set for its start to the pandemic rebound.”
Commerzbank said on Friday that it expects the euro area economy to return to its pre-crisis level by the end of this year.
Source: Read Full Article