New York (CNN Business)The slowdown at meat processing plants from the coronavirus pandemic has led to a new wave of panic-shopping at supermarkets. Some grocery stores are now imposing limits on meat purchases to prevent barren refrigerator displays.

Kroger (KR), this country’s largest supermarket chain, said it is adding purchase limits on ground beef and fresh pork in some stores. Other large grocers say they expect to be out of stock on different types of cuts very soon.
In recent weeks, top meat suppliers have announced temporary closures as their workers fall ill with coronavirus. The United Food and Commercial Workers International Union estimated Tuesday that 20 meatpacking and food processing workers have died so far. The union said last week the closures have resulted in a 25% reduction in pork slaughter capacity and 10% reduction in beef slaughter. President Donald Trump signed an executive order Tuesday to compel meat plants to stay open during the crisis. 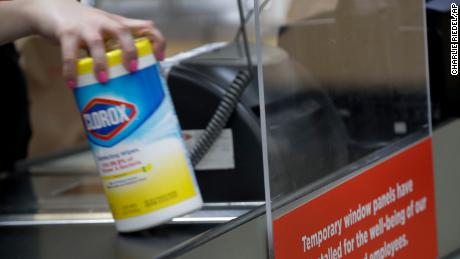 Adding to the challenge, meat sales are up around 40% in recent weeks, according to data shared by grocery industry trade group FMI. “The demand for product also makes it difficult to keep the store shelves stocked as they were at pre-pandemic levels,” said a spokesperson for the group.
Grocers don’t expect meat shortages, but they say are adjusting to the spike in demand and the difficulties securing supply.

“We feel good about our ability to maintain a broad assortment of meat and seafood for our customers because we purchase protein from a diverse network of suppliers,” said a Kroger representative. “There is plenty of protein in the supply chain. However, some processors are experiencing challenges.”
A spokesperson for Wegman’s said, “we may not have every product cut or variety available for the next few weeks,” but it does not anticipate any shortages.
Walmart (WMT), the largest grocer in the United States, does not expect it will have to set product limits on meat, according to a person familiar with the situation.
The company is working with its meat suppliers to convert production lines that normally process meat for the food service industry and redirect it for retail sales, this person said. Walmart is focused on supplying the most-commonly bought meat products. For example, it is forgoing thinly-cut meats that require more time to process in favor of larger cuts, the source added.
The slowdown is also hitting smaller chains.
In New York City, grocery chain Morton Williams’ co-owner Av Kaner said the “most severe shortages have been with packaged cold cuts,” because consumers want pre-packaged items right now instead of meat from the deli counter. “Beef prices have increased the most, followed less so by pork and poultry,” Kaner said.
At Karns Food in Pennsylvania, the chain has put limits on ground beef and some fresh chicken.

“We do anticipate periodic out of stocks and higher prices in the coming weeks,” said Andrea Karns, a representative of Karns Food in Pennsylvania.
While meat may be harder to find, Karns is using the shortage as an opportunity to expand its seafood selection, including fresh lobsters from Maine and Maryland crabs.
Source: Read Full Article