Interest rates could be cut BELOW zero to save economy, Bank of England says 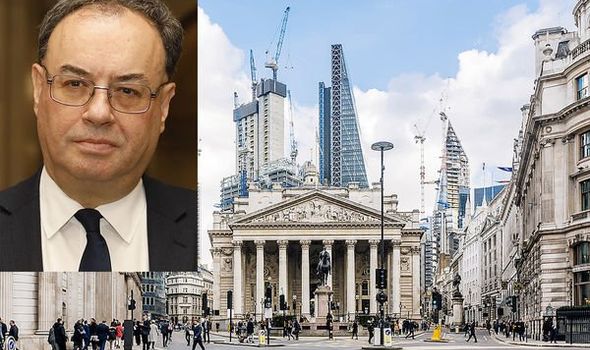 He insisted the central bank did not rule out any monetary policy “as a matter of principle” in the crisis. A negative interest rate effectively means a bank pays a borrower to take on lending. The unusual measure has been used in other countries including Japan and Sweden to try to boost consumer confidence and spending.

Mr Bailey was quizzed about the possibility of the Bank of England lowering its base rate beyond the current historic low of just 0.1 percent during a hearing of the Commons Treasury Committee yesterday.

He said the Bank was keeping the outlook for how low UK rates could go – and other monetary policy tools available – under “active review”.

This includes the prospect of negative rates and the possibility of buying riskier assets under its so-called quantitative easing bond-buying programme.

Mr Bailey, who succeeded Mark Carney as Bank of England governor in March, told the committee: “We do not rule things out as a matter of principle.

“That would be a foolish thing to do. But that doesn’t mean we rule things in either.”

He added: “We know that we may have to draw on our tool kit at any point… having that whole tool kit under review and assessed as the context changes is important.”

But he said the Bank believed the benefits weaken as rates approach zero and could even be “counterproductive”.

Policymakers are “looking carefully” at the experience of other central banks that have cut rates into negative territory, he said.

He also stressed communication surrounding negative rates was “absolutely critical”, given that it is “not a straightforward tool” for consumers to understand.

His remarks follow growing concerns about the collapse in UK economic growth as a result of the coronavirus lockdown.