Seven years ago John Robinson of Coeburn, Virginia, was diagnosed with black lung. A coal miner for nearly 30 years, 54-year-old Robinson and many of his fellow workers already faced years of health issues. And then came Covid-19.

Scarring of the lungs caused by years of coal dust inhalation, more formally known as coal workers’ pneumoconiosis, leaves miners at high risk of developing serious complications from coronavirus. Now the mining industry is trying to cut its payments to the fund that supports those affected.

“It’s easier for us to get sick because of lung damage. We get colds easier. We pick up germs easier. It’s something we deal with all of the time. But the Covid-19 has it doubled up on us,” said Robinson. “It’s made it that much worse.”

Robinson currently has an upper respiratory infection, which he develops a few times a year due to black lung. The last few years he spent in the mines before retiring, he regularly ate cough drops to try to alleviate his breathing issues. He tries to stay active, but finds himself increasingly short of breath and struggling to get air as his black lung progresses.

It took several years for Robinson’s federal black lung benefits claim to be accepted, and he’s still going through court processes that will decide if he continues receiving his benefits for life, despite being diagnosed with the disease.

While miners with black lung struggle during the pandemic, the coal industry is seeking to use the crisis to its advantage, cutting payouts to the federal black lung funds. Last month the National Mining Association asked Congress to decrease the excise tax that coal companies pay toward the fund by 55%. The federal black lung program, which pays out benefits to former coal miners diagnosed with the condition , has already faced financial problems in recent years in part due to coal companies filing for bankruptcy and shifting millions of dollars in liabilities onto taxpayers.

Some 25,000 former coal miners in the US currently rely on black lung benefits, and Robinson said hundreds of former miners will die trying to obtain their benefits, leaving their widows with nothing.

“We have a lot of sick coal miners in the world who need a lot of help,” said Robinson. “I wish these coal companies would own up to what’s happened over the years, but they don’t want to spend the money. They’ll pat you on the back, give you ‘attaboys’ as long as you’re working seven days a week, 12 to 14 hours a day, but once you get sick, then you’re nobody. You made them millions but they don’t want to do anything for you.”

Coal miners are also experiencing concerns over contracting Covid-19 while struggling with layoffs as some mines shut down because of the pandemic.

Cy Robinette, a heavy equipment mechanic at a coal mine in Florence, Kentucky, for 30 years, was recently laid off due to the pandemic and hasn’t been able to file a claim for unemployment benefits yet because of the state website’s technical difficulties.

“Everybody is quarantined, there is no work to buy our food and to pay our bills. We’re panicking over where our next meal is going to come from, how long this is going to last,” said Robinette. “If we get this virus, we will die due to having black lung issues. We won’t last but days or hours, but if it takes working and taking a chance catching the virus so it shall be. It has me at the end of my rope. I don’t know what else I can do just to support my family. I feel like a failure that I can’t work now.” 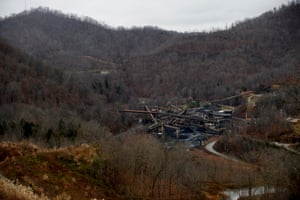 At least one in 10 US coal miners who worked in mines for 25 years or more are diagnosed with black lung. In Appalachia, those rates climb to as many as one out of every five. Appalachia experienced a surge in black lung cases in recent years, as US cases hit a 25-year high in 2018.

Dave Bounds of Oak Hill, West Virginia, worked in the mines for 34 years. The 72-year-old was diagnosed with black lung in 1984. The coronavirus pandemic is another added worry to the everyday issues he faces from the illness.

“It scares the living daylights out of me. I don’t want it. I’ve already got infected lungs, I don’t want anything on top of it,” said Bounds.

He worked 48 to 54 hours a week underground in conditions, Bounds said, where the coal smog was sometimes so thick he couldn’t see his hand in front of his face, even with his headlamp on.

“There were a lot of times in the winter months that I wouldn’t see daylight. I would go in before daylight and come in after dark,” said Bounds. “When I was diagnosed in 1984 with black lung, it was just a mild case and you always think you can fight this thing and make it better, but instead it gets worse.”

Black lung clinics across Appalachia have shut down due to coronavirus, with doctors insisting patients stay at home and conduct check-ups by phone or internet. New claims for federal black lung benefits and state exams have been put on hold.

“This extra impairment would be enough to kill them which is why we’re trying to be so careful in not having them in the clinic and encouraging them to stay at home, stay away from people so they don’t get it because it would be much more difficult for someone like that to recuperate, if it’s even possible,” said Debbi Wills, a black lung clinic coordinator in West Virginia.

Danny Fouts, a retired coal miner in Beaver, Kentucky who worked in the mines for 23 years and now suffers from black lung disease, has shifted his regular medical check-ups to phone or Skype.

“I’ve never been afraid of anything in my life. This is one time I’m really worried about something,” said Fouts. “If it’s not my immediate family, I don’t want them knocking on my door, I don’t care who it is. I’ve been telling my nieces and nephews to be careful about going outside. They say ‘I have a good immune system’, but I tell them ‘I don’t. Worry about me’.”