Jumbo jet sunset: coronavirus hastens the end of the Boeing 747

When Sir Richard Branson marked the 25th anniversary of Virgin Atlantic in 2009, he and the model Kate Moss posed on the wing of a Boeing 747. This symbol of the jet age was the only option for the billionaire showman. But a decade later, the plane has become a symbolic casualty of the chaos engulfing the airline industry during the coronavirus pandemic. Last week, Virgin Atlantic said it would retire all seven of its 747s.

More than 1,500 of the jumbo jets have been delivered over the 52 years it has been in service, but analysts say the savage decline in passenger traffic as governments seek to contain the spread of Covid-19 could hasten the decline of the plane, heralding an ignominious end for the so-called Queen of the Skies.

Lufthansa, the German flag carrier, last month brought forward the retirement of five 747s. KLM, its Dutch counterpart, has also confirmed that its jumbos will not return to the skies under its livery, as has France’s Corsair, accelerating the shift to newer models. That adds to plans from British Airways to scrap its 28 747s by 2024; the largest remaining operator of the planes in the world made the announcement in early 2019.

Around the world, Boeing and its bitter European rival Airbus are locked in negotiations with airlines desperate to preserve cash by delaying the delivery of new aircraft. The manufacturers will agree to defer some deliveries, but they will also seek to preserve their own cashflows, according to Burkett Huey, an analyst at Morningstar. “To some extent the manufacturers will play ball but ultimately the airlines do have obligations,” he said. “Barring unprecedented events, they’re going to have to figure out some way of taking delivery of them.”

The arrival of newer models at a time of low demand leaves the ageing jumbo in an unenviable position. The 747 saw off the challenge of the Airbus A380 superjumbo, which ends production next year, but it still faces many of the problems that ultimately grounded its closest rival. Larger planes are only worthwhile financially on longer-distance, popular routes, making them less flexible for airlines. Smaller, newer aircraft are now capable of flying longer routes as well as short-haul, making them more attractive as the industry faces up to months or even years of slow recovery in air passenger demand once lockdown restrictions are eased. 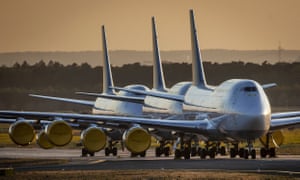 Fuel-efficiency savings in newer, twin-engined planes add to the attraction of retiring the four-engined 747 early, even with oil prices near historically low levels. And significant maintenance costs for older planes tip the balance further: Virgin’s 747 fleet has an average age of 20 years, much higher than the rest of its planes, which have an average age of nine, according to aircraft data provider Planespotters. Virgin said scrapping its 747-400s, along with four Airbus A330-200s, would cut carbon emissions by about 10%.

The 747 is manufactured in what is thought to be the world’s largest building, Boeing’s Everett factory. Some 30,000 employees worked at the facility north of Seattle before last month’s announcement that it would cut 10% of its workforce, with job losses concentrated in the commercial aviation division, which had already been hit by the grounding of the 737 Max after two fatal crashes.

Yet Boeing has not yet cut back the production rate of the 747 programme, partly because it is only producing about six of the aircraft a year, but also because there continues to be some demand from cargo carriers. Talking on a conference call last week, Boeing’s new chief executive, Dave Calhoun, emphasised that the 747 was aimed at the cargo market.

Indeed, the 747 was initially developed to carry freight, with its distinctive hump designed to raise the cockpit and allow the nose to hinge open for larger loads. Older passenger 747s now being retired are however unlikely to be repurposed for cargo, according to Howard Wheeldon, an independent aerospace analyst.

However, it was the White House that gave Boeing the most important incentive to keep production running, said Joshua Sullivan of the Benchmark Company, a New York investment bank. Boeing is contracted to deliver two 747-8s in 2024 to be used as Air Force One, the president’s personal plane.

President Donald Trump made an unverified claim to have saved $1.4bn by negotiating down Boeing’s price to $4bn. Whether that discount was achieved or not, it illustrates the high margins to be had on the 747’s most famous iteration.

Special adaptations thought to be ordered for the two planes include extensive kitchen facilities, mid-air refuelling and protection against electromagnetic pulses for the president or his successors – meaning the final 747s are likely to be among Boeing’s most profitable. But there are lean years ahead for the aviation industry.