NASA says its Ingenuity Mars helicopter sent a positive status update. As it prepares for the flight, the agency is thinking about future crewed flights to the Red Planet.

Scientists at NASA’s Jet Propulsion Laboratory said they’d heard back from the tiny Ingenuity Mars Helicopter, paving the way for its first-of-a-kind flight on the Red Planet.

The helicopter’s first status report arrived as expected, said Tim Canham, operations lead for the project, in a statement on Friday. It said Ingenuity’s batteries were charging as expected and its base station was operating as designed.

“Both appear to be working great. With this positive report, we will move forward with tomorrow’s charge of the helicopter’s batteries,” Canham said.

The helicopter, which landed on Mars aboard the Perseverance rover on Thursday, weighs about four pounds, with a fuselage roughly the size of a tissue box, according to NASA.

When Ingenuity takes off on Mars in the coming days or weeks, it will be an event akin to the Wright brothers’ Flyer taking off on Earth, NASA said in press materials about the helicopter.

“If successful, these technologies could enable other advanced robotic flying vehicles that might be part of future robotic and human missions to Mars,” NASA said.

Ingenuity will have to make it through a few steps before its flight.

First, its batteries will be charged, NASA said. The rover will supply enough charge to get them to about 35% of their total. Once the helicopter is dropped on the Martian surface, it will rely on its own solar panel for power, the agency  added. 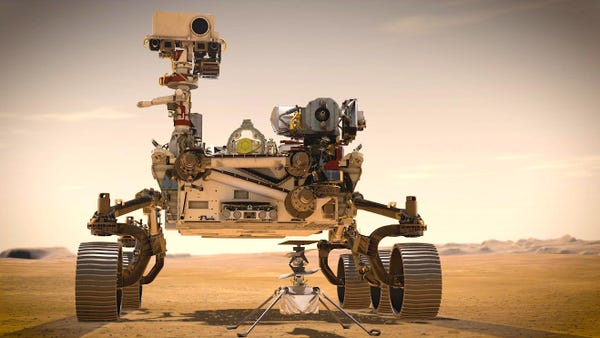 Then, the helicopter will need to “survive” the planet’s harsh atmosphere.

“If Ingenuity survives its first bone-chilling Martian nights – where temperatures dip as low as minus 130 degrees Fahrenheit (minus 90 degrees Celsius) – the team will proceed with the first flight of an aircraft on another world,” NASA said in a statement on Friday.

Ingenuity’s first flight, if successful, will achieve about 90% of NASA’s goals for the helicopter.

The craft doesn’t yet have a scheduled take-off day, but will have an approximately 30-Martian-day window, according to NASA. That’s about 31 Earth days.

“Just about every milestone from here through the end of our flight demonstration program will be a first, and each has to succeed for us to go on to the next,” said MiMi Aung, project manager.

Aung added: “We’ll enjoy this good news for the moment, but then we have to get back to work.”