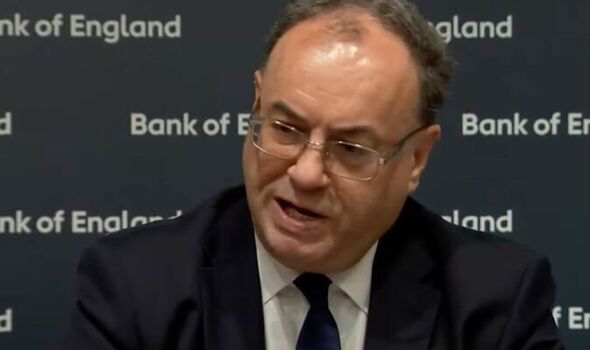 Sterling fell 0.2 percent to $1.2122 against the US dollar having traded 0.3 percent higher at $1.2184 just before the announcement from the BoE. Against the euro, the pound dropped even more, this time by 0.5 percent to 84.12 pence. The BoE has warned the UK is facing a recession after it increased its benchmark rate by 50 basis points as it desperately tries to get surging inflation under control.

Its Monetary Policy Committee voted 8-1 for a half percentage point rise in the rate to 1.75 percent – the highest level since late 2008.

The bank warned Britain is facing a recession with a peak-to-trough fall in output of 2.1 percent – similar the slump seen in the 1990s.

Britain’s economy is forecast to shrink in the final three months of this year and contract throughout all of 2023, making it the longest recession since after the global financial crisis.

Consumer price inflation is now expected to surge to a peak of 13.3 percent in October – the highest since 1980.

This would leave millions of UK households two consecutive years of declines in their disposable incomes and would mark the biggest squeeze since these records began in 1964.

Surging inflation is being driven by a hike in energy prices following Russia’s invasion of Ukraine more than five months ago.

The Bank’s Monetary Policy Committee said: “The United Kingdom is now projected to enter recession from the fourth quarter of this year.

“Real household post-tax income is projected to fall sharply in 2022 and 2023, while consumption growth turns negative.”