Royal Mail has been fined £1.6m by the communications regulator Ofcom for delivering letters late and overcharging for stamps.

Ofcom requires the postal service to deliver 93% of first-class post within one working day of collecting it but Royal Mail undershot the target, with only 91.5% of post arriving on time during the 2018-19 financial year.

Royal Mail argued that its performance was hindered by roadworks carried out by Highways England but Ofcom said it still underperformed, even adjusting for the impact of disruption.

Gaucho Rasmussen, Ofcom’s director of investigations and enforcement, said: “Many people depend on postal services and our rules are there to ensure they get a good service, at an affordable price.

“Royal Mail let its customers down and these fines should serve as a reminder that we’ll take action when companies fall short.”

Ofcom fined Royal Mail £1.5m for the breach of obligations, which it said was not repeated in 2019 once the impact of Covid-19 was taken into account.

The regulator also handed down an additional fine of £100,000 after it found that Royal Mail had overcharged customers for second-class stamps for a week in March 2019. 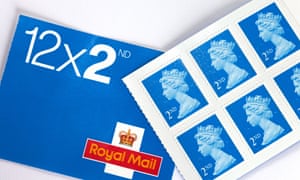 Ofcom capped the price of second-class stamps at 60p from 1 April 2018 to the end of March 2019 but Royal Mail exceeded this by a penny in the week before the cap was lifted.

Customers were overcharged by £60,000, indicating that the postal service overcharged for 6m stamps during the week-long period, money that it is unable to refund.

“Given the harm caused and failure in its processes to stick to the price cap, we have decided to fine Royal Mail £100,000,” Ofcom said.

“It has since made changes to its compliance processes that it says will prevent this error from happening again.”

A Royal Mail spokesperson said it was disappointed with its performance, adding: “We accept and understand Ofcom’s decision.

“We accept and note Ofcom’s decision around the 2019 second-class price cap. We made a mistake.

“At the time, we sought to put this error right by publicly acknowledging our mistake.

“We also donated the revenue that we expected to make from this error – £60,000 – to our chosen charity Action for Children, which helps young people at risk of developing mental health problems.”

Royal Mail has been struggling with labour disputes and falling letter volumes, leading to the departure of its chief executive, Rico Back, in May.

The company, which was privatised in 2013, last month announced a cost-cutting plan that will involve about 2,000 job losses.