Small planes and no business class: will flying ever be the same again?

The peak season for airlines should have started this Easter, when millions of passengers go on holiday and leisure trips through to September. Instead, carriers around the world have been forced to ground their fleets due to travel restrictions imposed in the wake of the coronavirus pandemic.

During this standstill, wider questions are occupying the industry: what steps would allow flying to restart, what will the pandemic mean for air travel, and will airlines – those that survive – ever be quite the same again?

As Alexandre de Juniac, director general of the International Air Transport Association (Iata), put it: “We are not expecting to restart the same industry that we closed a few weeks ago.”

Airlines are talking to regulators now for guidelines over how travel might resume while coronavirus remains a smaller, but uncertain, risk. Social distancing at airports and on planes is likely to persist, potentially reducing the number of occupied seats. EasyJet has said it expects to leave middle seats on planes empty as a short-term measure, to reduce the level of contact – a less onerous restriction while demand is low. Deeper cleaning of aircraft seems likely, and potentially the wearing of masks onboard.

De Juniac noted that China’s airline travel restrictions are tougher now than during the height of its own outbreak, to limit reinfection from abroad – and national public health authorities and governments will dictate the procedures. But Iata hopes to find global consensus on sanitary measures to enable air travel again. Screening of travellers could be necessary: passenger temperatures were taken after the Sars crisis and a comparable coronavirus test, should one become widely available, could eventually restore confidence. Emirates announced it had trialled a rapid blood test, where the results are available in 10 minutes, on all passengers on one flight from Dubai to Tunisia this week. 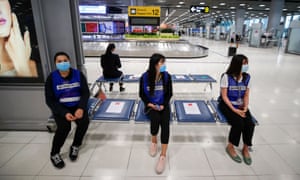 The next industry shutdown could be swift

Hypermobility brought a disease from a Chinese city to just about everywhere before serious flight restrictions were put in place. There will be no delay next time. Any signs of a new virus outbreak – or a second wave of coronavirus – would surely be met with far quicker measures to block international flights, rather than leaving it to airlines to respond to falling demand in the months after a virus is detected.

Aviation’s optimists talk of pent-up demand for holidays; others wonder how many passengers will want to risk a vacation abroad. Many of the last European leisure trips were for ski resorts which proved, like cruise ships, major incubators and exporters of Covid-19. The depth of the accompanying economic recession will also be a factor. Airline analyst John Strickland, of JLS Consulting, says: “Even if they have the money to fly, I think people will be apprehensive. Normal summer markets like Spain and Italy, even they wanted to receive people commercially, might not welcome visitors now.”

Andrew Charlton, an aviation consultant, is also damning of the airlines’ “tin-eared response” to the crisis by offering vouchers rather than refunds to customers on cancelled flights, in a desperate attempt to save cash. “Yes, passengers will travel by banking their vouchers … But people being burnt by that now aren’t going to book ahead in future – it’s collapsing confidence in booking.”

The end of business travel

Health fears initially made companies halt work trips; now it is an expense that struggling firms will likely shelve. Strickland says: “Some of those businesses will have disappeared, others have put travel bans in place, and all have discovered the joys of videoconferencing – the lucrative premium cabins on long-haul flights won’t be full for a while. Whether all this is a permanent structural change remains to be seen, but even it is not for ever, it will be a long recovery.”

Smaller planes, and fewer of them

Coronavirus looks to have hastened the demise of the world’s biggest planes, built for long-haul: both the relatively young Airbus A380, and the Boeing 747-400, the original jumbo, were on their way out anyway. Both models were among the first to be grounded this year as demand fell.

German carrier Lufthansa has announced it would be permanently axing half its modern A380s, and retiring a similar number of its 747s early. Charlton thinks it is just the start: “You will never see a 747 flying again, and the only A380s will have Emirates painted on the side.”

Is the environmental gain permanent?

Coronavirus has meant a bigger instant fall in emissions than any green campaigner could have dared dream. Many of them now demand that state bailouts of bankrupt carriers should have environmental conditions attached.

Iata has said the industry remains committed to green targets – but airlines may be more reluctant to proclaim net-zero ambitions or invest in sustainable jet fuel plants. Already the UN-backed global offsetting scheme, Corsia, could face renegotiation. And while bigger carriers will jettison older planes, they may also decide to defer orders, as easyJet has done for part of a £4.5bn Airbus contract, to bring in new, lower-emitting aircraft.

Will air travel get more expensive?

Analysis by US-based Dollar Flight Club, based on patterns after previous crises, predicts average fare falls of 35% through 2021, but for prices to then double by 2025.

Flights will get cheaper as airlines desperately try to sell tickets – and then rise substantially as capacity falls, Charlton believes. “In the short term, the Ryanairs of this world are going to bomb the market with cheap seats to get revenues to survive. Others will try to match that and will collapse.” Capacity will then fall and fares rise, as supply is squeezed.

The widespread industry consensus is that there will be fewer airlines as the industry consolidates via mergers, takeovers and bankruptcies. Iata has warned of mass insolvencies should the grounding persist beyond May. Already, airlines would have started summer schedules – meaning fuller, far more profitable flights. Instead, Iata said this week it now expects to lose more than half its annual revenues in 2020, a $314bn (£249bn) decline.

Strickland says: “Airlines are going to fall by the wayside. I feel sadly sure that aviation is going to be much smaller.”