The US model of capitalism is deeply flawed. It is highly unequal, and an inadequate welfare system means that millions of people are either living in poverty or constantly teetering on the edge. Citizens of the EU have it cushier, with more generous pensions, unemployment pay and in-work benefits.

But as the events of the past month or so have shown with brutal clarity, in a crisis the American system works better. It is more flexible, more innovative and much faster to act. The Federal Reserve in Washington has acted more speedily and provided more stimulus than the European Central Bank in Frankfurt, but the contrast has been even more marked when it comes to fiscal policy – the tax and spending measures for which governments are responsible.

Last week saw yet another can-kicking exercise by EU leaders, who have been at odds for weeks over whether to issue common bonds in response to the economic devastation caused by Covid-19. The matter now looks as if, with luck, it might be finally resolved in early June, but that’s a long time in the current circumstances.

Delay is potentially disastrous, for two obvious reasons: the parlous state of the EU economy requires an immediate coordinated response; and the lack of unity puts at risk the goal of ever-closer union.

It is not as if the countries that are blocking the mutualisation of debt through coronabonds are doing especially well. The latest survey of German business sentiment was dire, and the outlook will remain so until there is a pick-up in demand for the country’s exports. This, though, does not seem to have forced Angela Merkel to rethink her opposition to coronabonds, which remains resolute whatever the circumstances. 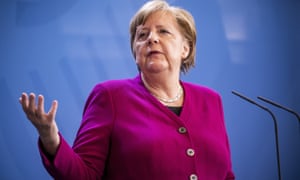 This is not the way things work in the US. Policy is driven by events, not dogma, and as a result is far more creative. So while it was Groundhog Day in Europe, Congress was passing a fresh stimulus bill and the US treasury was doing its utmost to ensure that loans promised to small businesses were actually delivered.

There is a pattern here. In 2008-09, the Fed moved more quickly than the ECB to cut interest rates and to introduce the money-creation scheme known as quantitative easing. President Barack Obama’s stimulus package would ideally have been bigger, but it was better than the fetish for fiscal discipline that the EU insisted on. Moreover, it didn’t take long for the Americans to work out that the economy would never really recover unless the banking system was cleaned up. It took years for the Europeans to twig this, which is why the US went into the current crisis with its banks in relatively good health and the EU did not.

Indeed, there are justifiable fears about how Italian and – to a lesser extent – German banks will withstand the sort of bad-loan losses that look all too likely given the impact of the lockdown on business activity. That’s another reason why the hardliners in Germany and the Netherlands need to think again about coronabonds.

No question, the US system has its drawbacks. The lack of a proper social safety net is the main reason Donald Trump is desperate to get the economy out of hibernation, and moving too rapidly could easily backfire.

But, as things stand, history is about to repeat itself. As in 2008-09, all developed economies will go into a deep recession, but the US will rebound first and fastest. Europe’s timidity will result in deeper scars. Last time they were just economic. This time they could be political too.

Who needs Davos when you’ve got Zoom?

It should not require a pandemic for the business “elite” to realise that Davos should be junked from the corporate calendar. The World Economic Forum’s annual shindig became a laughing stock a long time ago. All those denunciations of global inequality, when made by corporate captains clinking champagne glasses in a Swiss ski resort at shareholders’ expense, are ridiculous.

The penny finally seems to be dropping, for which we should give modest thanks. Standard Life Aberdeen, the FTSE 100 asset manager, says its executives won’t go next time and it will allocate its £3m budget – yes, really – to something more useful.

“WEF has done a lot of good over the years,” claimed its chief executive, Keith Skeoch, contentiously, in an email to staff last Friday, “but I believe we should focus our efforts and resources closer to home in the locations where we operate around the world. The money will be directed to high-impact community projects to provide relief to people most in need.”

One of the WEF’s thin justifications for the existence for Davos is that a gathering of politicians and business leaders helps to create global responses to global risks. The evidence for such a claim was always hard to spot, but never more so than now. Lack of international cooperation has been a defining feature of the world’s early response to the spread of Covid-19.

Come next January, attendance by corporate bosses at Davos will be very hard to defend. The global economy, almost certainly, will still be depressed. The fleets of corporate jets at Swiss airports, carrying millionaires and billionaires anxious to express their concern over the climate emergency, will be more offensive than usual.

Standard Life Aberdeen is the first major name to pull out. It won’t be the last. Try teleconferencing. 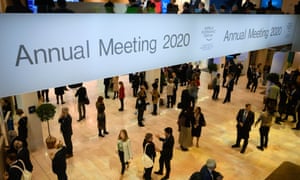 Commercial landlords know they’re never going to win a popularity contest. And, after a quarter of century of comfortable growth in rental income, during which time some spectacularly ugly shopping centres were built, nor should they.

But landlords also make a fair point in the current Covid-19 stand-off over rents: if a tenant can afford to pay, it should. That, formally, is also the government’s position. It’s just that Alok Sharma, the business secretary, seems to have created a free-for-all in his attempt to curtail some landlords’ strong-arm tactics on rent collection.

The reasoning behind the government’s temporary ban on winding-up orders is fair enough: most high street shops are shut and those companies at risk of collapse should be given some financial breathing space. But then Sharma followed up with a woolly call for other tenants to “pay what they can in recognition of the strains felt by commercial landlords too”.

That loose wording is an open invitation for even strong retailers to try their luck. Boots, the chemists’ chain, says it has “paused some payments” in the hope of reaching a “fair” agreement with some of its biggest landlords. Why? It’s not even remotely in the struggling camp.

Boots is part of the enormous Walgreens Boots Alliance empire, valued on the US Nasdaq market at $38bn. Most of its UK shops are open, as the pharmacies are classed as an essential service. Footfall may be down 65% but, on the other hand, Boots benefits from the government’s scrapping of business rates for retail, leisure and hospitality firms this year. It can clearly afford to fulfil its contractual obligation to pay its rent in full, on time.

In practice, landlords will probably lose most of these skirmishes since their biggest fear is empty space, and retail rents were falling anyway before the crisis. But some tenants are exploiting the situation. For a change, a slice of sympathy for landlords is in order.