These logs are made from recycled coffee grounds

London (CNN Business)Coffee chains create a lot of waste, from disposable takeaway cups to the used grounds that are sent to rot in landfills.

Starbucks (SBUX) has started to trial recyclable alternatives to the disposable cups. But the used coffee is often overlooked. UK startup Bio-bean thinks it has found a way to turn that waste into a valuable resource.
The world drinks around 2 billion cups of coffee a day, producing 6 million tons of used grounds every year, according to a 2011 study. When they go to landfill, the decomposing grounds release greenhouse gases into the atmosphere, contributing to global warming.

Bio-bean, however, is turning 7,000 tons of those grounds a year into biofuels. In 2017, it developed a coffee-based biofuel to be used in London’s diesel buses, but it wasn’t commercially viable, so the company has shifted its focus to solid fuels for household and industrial use.
These fuels release greenhouse gases when burned, but if they replace other carbon-based fuels, Bio-bean estimates that the recycling process reduces emissions by 80% compared with sending the grounds to landfill. 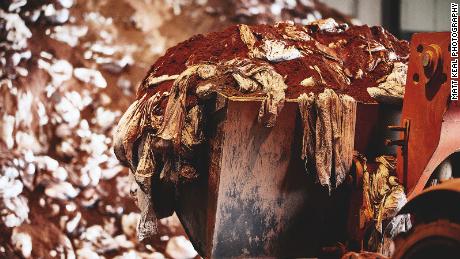 Bio-bean has raised more than $7 million in funding since it was founded in 2013. It recycles grounds collected from companies including Costa Coffee, London Stansted Airport, and UK railway operator Network Rail.
“We’ve really managed to succeed with our innovation [because] we’ve managed to get to scale,” says George May, director and Chief Commercial Officer of Bio-bean. “Other people may recycle one or 10 tons of coffee. We’ve recycled over 20,000 tons in our lifetime.”
Bio-bean has been impacted by the Covid-19 crisis, but its operations are continuing. Although coffee outlets in the United Kingdom have temporarily closed because of coronavirus restrictions, Bio-bean says it has still been able to get grounds from various recycling partners, but at lower volumes than usual.

Coffee as a fuel

At the company’s plant in Cambridgeshire, used coffee grounds are decontaminated to remove paper cups or plastic bags, and then passed through a dryer and a further screening process. They are finally processed into products such as biomass pellets, home fire logs or a natural flavor extract.
The pellets can be used to power industrial boilers, heat commercial greenhouses or to dry cereal crops, while the coffee logs can be used in log-burning stoves.
“Coffee is highly calorific and lends itself to being a really fantastic fuel,” says May. “They burn about 20% hotter and 20% longer than wood logs do.” 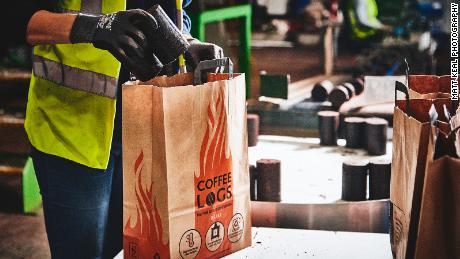 Jenny Jones, a professor in sustainable energy at the University of Leeds, says recycled coffee grounds have potential as a fuel, but adds that the overall carbon saving needs to be evaluated and compared with alternatives for dealing with coffee ground waste, such as incineration, or turning it into mulch for plants.
Jones also says that coffee grounds, like most biomass residues, are higher in sulfur and nitrogen than most woods, which emit harmful gases such as sulfur dioxide and nitrogen oxides when burned.

Bio-bean notes that its commercial biomass pellets are certified by the UK’s Sustainable Fuel Register, while the coffee logs have “lower particulate emissions than most wood logs.”
Despite being delayed by the coronavirus pandemic, Bio-bean says it plans to expand its operation into northwestern Europe within the next five years.
Source: Read Full Article