In the last week, Thailand has seen some of its biggest anti-government protests in decades as thousands of students took to the streets to demand democratic reforms.

They are also calling for curbs on the powers of King Maha Vajiralongkorn, a ruler famous for his mistresses, crop tops, and globetrotting ways.

Thailand has some of the strictest lèse-majesté (to do wrong to majesty) laws in the world, with some protesters facing up to 15 years in prison if charged.

Scroll down to see what is happening in the Southeast Asian country.

Pro-democracy protests have erupted again in Thailand despite a government emergency decree that has banned large gatherings. 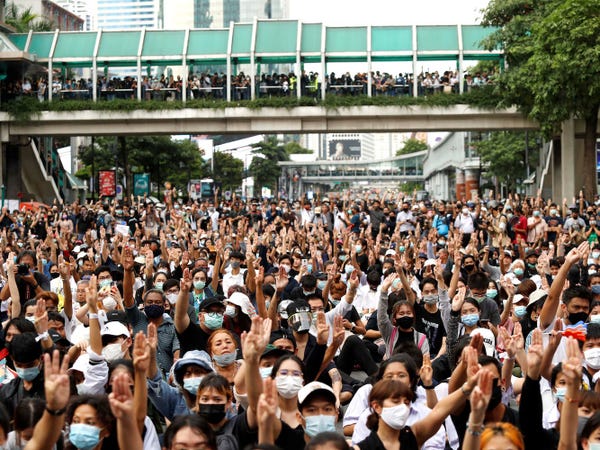 The main symbol used by protesters has been the three-finger salute, similar to the one used in the popular film franchise "The Hunger Games." 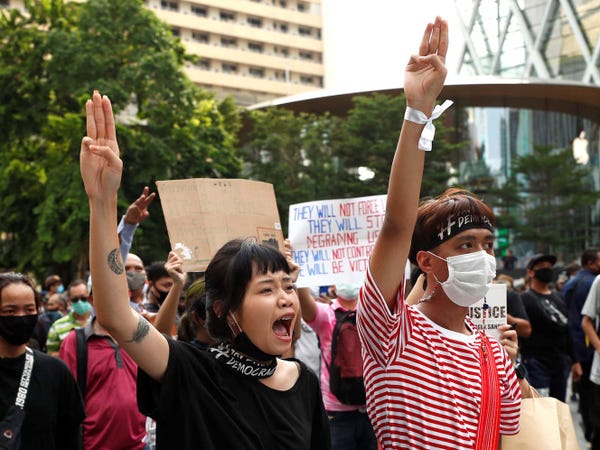 People have been urged to use the three-finger salute during the national anthem, which is usually played in public spaces such as train stations, twice a day.

The student-led protest movement has been ongoing ever since the country's prime minister, Prayuth Chan-o-cha, was appointed after controversial elections in 2019. 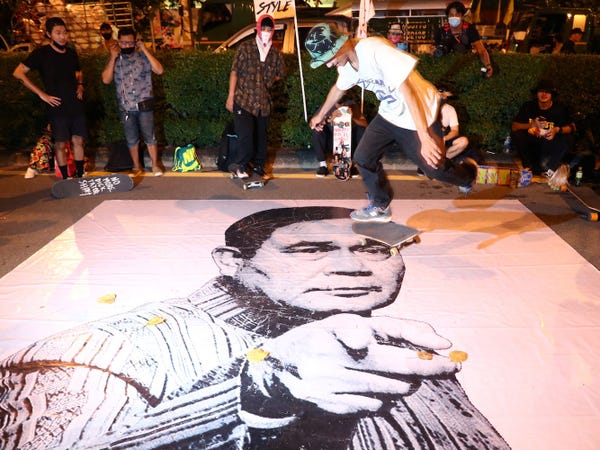 Chan-o-cha, who is a former army chief, first seized power in a 2014 coup.

Protesters have since been calling for the government's dissolution and for democratic reforms. 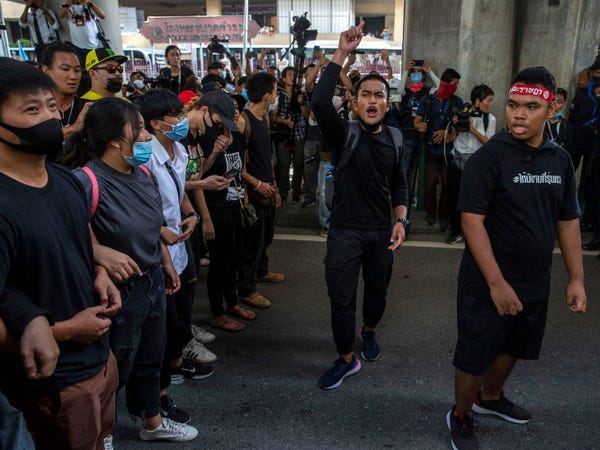 But it's not just the prime minister that people are protesting against. In recent months the demonstrators have also started calling for curbs on the powers of King Maha Vajiralongkorn. 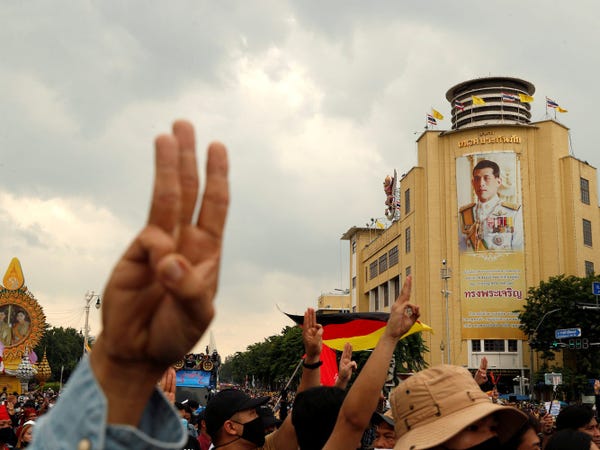 King Vajiralongkorn reportedly fled the country months ago, spending lockdown in a four-star hotel in the Bavarian Alps with an entourage of 20 women. His absence prompted Thai resident to tweet: "Why do we need a king?" over one million times 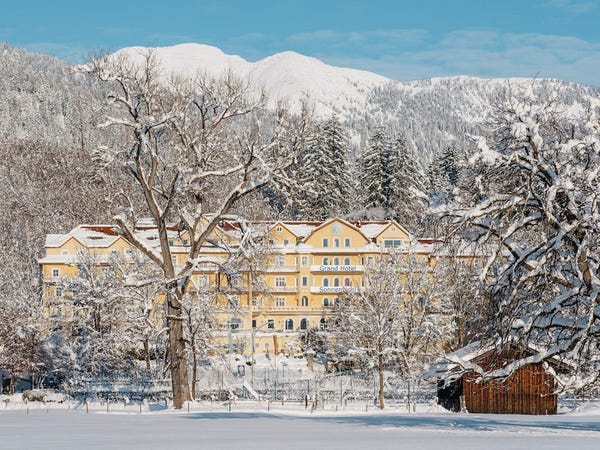 Vajiralongkorn has been the King of Thailand since his father died in 2016. With an estimated net worth of $30 billion, Vajiralongkorn is the world's wealthiest ruler as of 2020.

Before his coronation, the King married his longtime partner and personal bodyguard, Maha Vajiralongkorn, in a surprise ceremony.

However, in July, he bestowed the title of Royal Noble Consort to Sineenat Wongvajirapakdi, a former army nurse believed to be another longtime girlfriend. She was later spotted wearing a crop top and piloting a plane, according to pictures released by Reuters.

Protesting against royal reforms is extremely dangerous in Thailand, which has some of the strictest lèse-majesté (to do wrong to majesty) laws in the world. 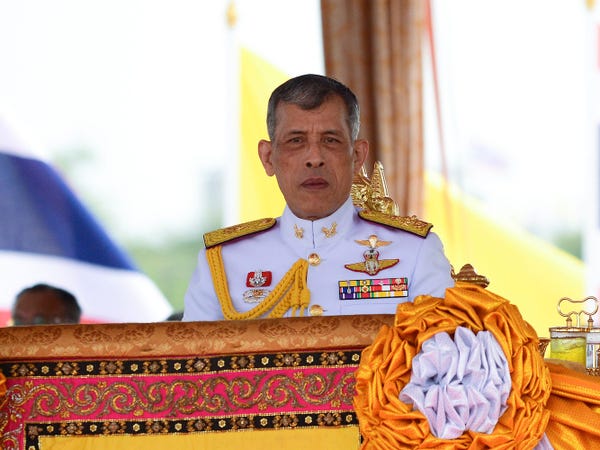 Anyone who "defames, insults or threatens the king, queen, heir-apparent or regent" in the country can face up to 15 years in prison on each charge, according to the Guardian.

More than 20 people have been arrested this week, including three protest leaders. 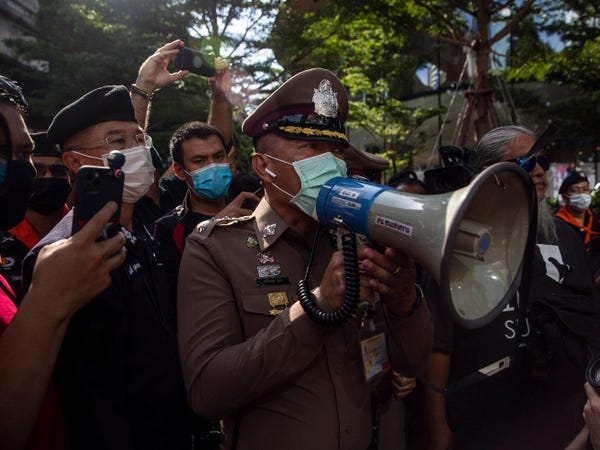 "For our future, we demand three things. First, Prime Minister Prayuth Chan-0-cha must resign. Second, we want to rewrite the constitution, and third, we demand reformation of the entire monarchy,"  Chiwarak told the Guardian last week.

Protesters have also been wearing white ribbons and chanting "Free our friends!"in reference to those detained in the crackdown. 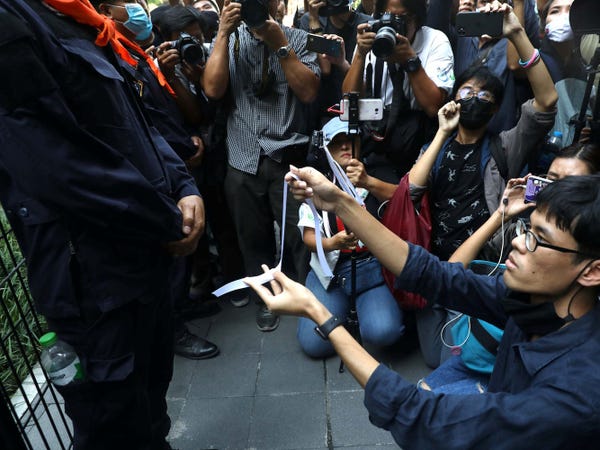 Thousands of people defied the emergency decree hours after it was issued on Thursday, gathering in Bangkok's busy Ratchaprasong intersection. 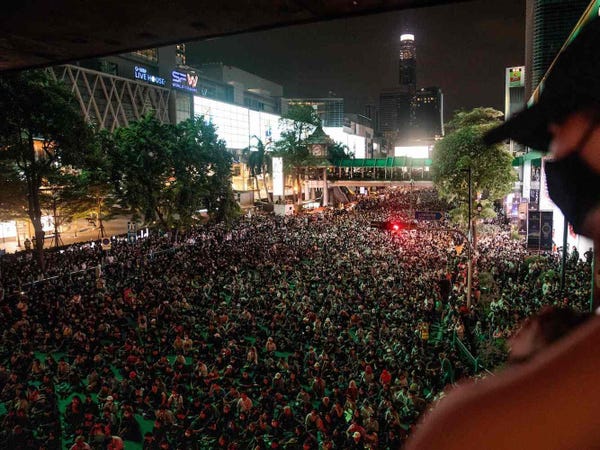 People were chanting "release our friends" and called police "slaves of dictatorship", according to the Guardian.

Deputy police spokesman Kissana Phathanacharoe said student leaders who had called for a protest on Thursday were "clearly breaking the law," the paper reported.

In response, a large force of police officers in riot gear were sent to the streets to advance on protesters. Although the protest was mainly peaceful, pictures from the scene did show some clashes and a handful of protesters being arrested. 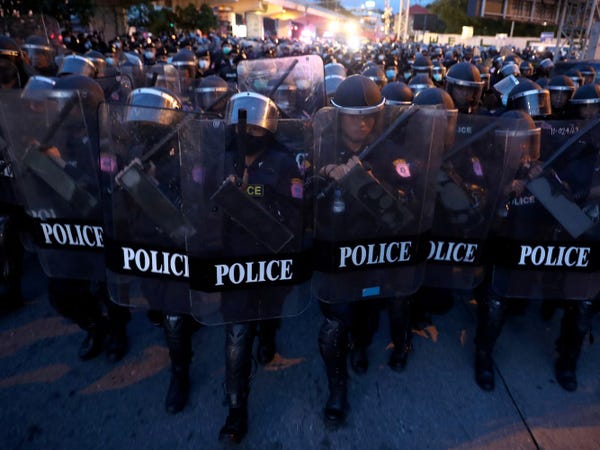 "Like dogs cornered, we are fighting till our deaths," Panupon Jadnok, one of the protest leaders told crowds on Thursday. "We won't fall back. We won't run away. We won't go anywhere." 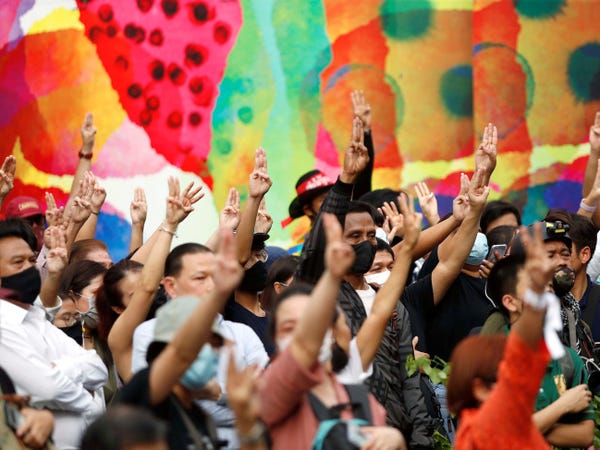