Washington (CNN)President Donald Trump has begun carrying out his campaign pledges to undo America’s trade ties — starting Monday with executive action to pull the United States out of the Trans-Pacific Partnership.

“Great thing for the American worker, what we just did,” Trump told reporters Monday in the Oval Office as he signed the order.
TPP vs RCEP: Key trade deals explained

Here’s what you need to know about Trump’s move:

What did Trump do Monday?

Trump formally withdrew the United States from the Trans-Pacific Partnership — a 12-nation deal that had been negotiated under former President Barack Obama.
Nothing changes because of Trump’s move. Congress had not yet approved the TPP — its fate was bleak on Capitol Hill no matter what the White House did — and the deal had not yet taken effect.
However, by pulling the United States out of the deal, Trump fulfilled a campaign promise.
And in doing so, he ends all hopes for a deal Obama wanted as a major part of his legacy.
The TPP — which has also included Canada, Mexico, Japan, Australia, New Zealand, Chile, Peru, Malaysia, Singapore, Vietnam and Brunei — would have slashed tariffs for American imports and exports with those countries. In exchange, the United States had negotiated labor, environmental and intellectual property protections that major businesses sought. The deal’s critics complained that it didn’t directly address the issue of currency manipulation. 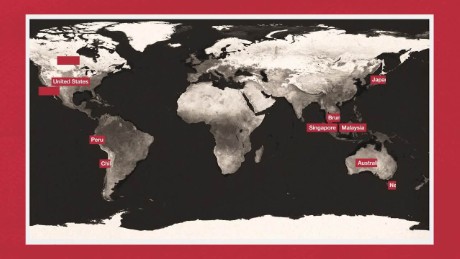 What is TPP? The massive trade deal, explained.

Now the pressure is on Trump

Trump on Sunday announced he’d start to renegotiate the North American Free Trade Agreement. On Monday, he pulled the United States out of the Trans-Pacific Partnership.
He has now taken firm control of the trade rules he long decried, and is in position to reverse decades of American presidents pushing for lower trade barriers and an interconnected global economy.

In other words: Now, the pressure is really on.
Trump’s bet is that, through his negotiating prowess, force of will and willingness to walk away from the table, he can convince other countries to accept terms that previous presidents — from George H.W. Bush and Bill Clinton on NAFTA to Barack Obama on the TPP — have not been able to achieve.
The task is difficult — even though Trump’s move to withdraw from the TPP is likely to be politically popular. Even Vermont Sen. Bernie Sanders — a leading Trump critic — praised it, saying he is “glad the Trans-Pacific Partnership is dead and gone.”
“Now is the time to develop a new trade policy that helps working families, not just multi-national corporations,” Sanders said in a statement. “If President Trump is serious about a new policy to help American workers then I would be delighted to work with him.”

What this means for globalization

Until Trump negotiates his own bargains, he’s betting he can reverse the decades-long trend of globalization.
He faces a lot of skeptics. Big businesses are howling that Trump is undercutting their ability to sell to the vast majority of the world’s consumers — a particularly damaging move if manufacturing jobs that have already left the United States are gone for good.
Republicans have long supported free trade — and now find themselves torn between a protectionist President and a business community that sees Trump’s position as detached from the reality that new technology, rising wages and an increasingly interconnected world mean that many manufacturing and low-skill jobs won’t return to the United States; that goods are sold cheaper in the United States because they are made overseas; and that American companies also benefit from trade deals, making trillions of dollars selling their own products oversees.

Those GOP principles were on display in the reaction to Trump’s move.
“I don’t see any benefit in trying to crawl back into our shell as a country,” Senate Majority Whip John Cornyn, R-Texas, told CNN.
“It’s clear that those of us who believe trade is good for American families have done a terrible job defending trade’s historic successes and celebrating its future potential. We have to make the arguments and we have to start now,” Nebraska Sen. Ben Sasse said in a statement.

How will this affect Americans?

Because the TPP hadn’t taken effect, there will be no immediate impact.
Quantifying what it means the United States is foregoing by turning down what would have been a deal including countries that make up 40% of the global economy — both in terms of jobs retained and business lost — is difficult, and numbers offered by both critics and advocates of the deal are disputed.
But labor groups — some of which are scheduled to meet Trump Monday at the White House — are sure to celebrate the move. They’ve long argued it would continue a trend of shifting American manufacturing jobs overseas to nations with lower wages and fewer labor protections.
Businesses will also lose access to potential new markets, though. US automakers hoped to see tariffs slashed in Asia. Farmers were set to see the removal of trade taxes that currently prevent them from selling products, particularly poultry, overseas. Pharmaceutical drug-makers had received years of patent protection that would have lessened the competition from generics in Asia. And tech companies, from Google to cell phone providers, sought to lessen regulations and gain entry into some of the countries involved in the deal.
“This decision will forfeit the opportunity to promote American exports, reduce trade barriers, open new markets, and protect American invention and innovation,” Arizona Sen. John McCain said in a statement critical of Trump’s executive action.

What does China have to do with it?

Best-case scenario for the United States: Nothing at all, since China wasn’t involved in the TPP.
But already, Chinese leaders are angling to take the United States’ place and expand the country’s influence in the region.
“We must remain committed to promoting free trade and investment through opening up and say no to protectionism,” Chinese President Xi Jinping said in a speech at the World Economic Forum in Davos last week.

Obama had pitched the TPP as a way to counter China’s growing influence by imposing US-backed labor, environmental and patent protections. China is unlikely to seek or support such protections in its own trade negotiations — allowing those countries to produce cheaper goods, but with fewer worker protections.
The 11 remaining TPP nations are now set to regroup. Trade ministers from those nations say they intend to press forward with the deal — but the United States’ withdrawal could mean a major rewrite, or an opening for another global superpower to pursue an alternative agreement.
Source: Read Full Article