(CNN Business)Employees at a Tyson plant in Independence, Iowa, say they’re fearful and on edge after a colleague died from complications of Covid-19.

They work in an industry few realize has been deemed essential by the federal government: the pet food industry. Plant workers tell CNN Business they don’t feel properly protected from the virus. The company temporarily shut down two other plants in the state earlier this month due to concerns about the spread of coronavirus.
Tyson (TSN) says the Independence plant, which employs nearly 250 people, is critical infrastructure and essential to the nation’s food supply. The plant manufactures dog treats. 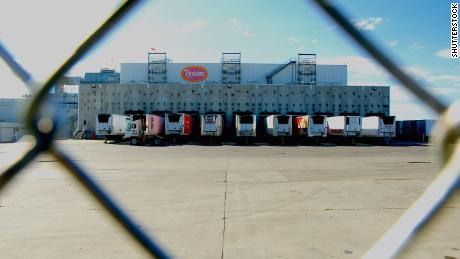 CNN Business spoke to four employees who work in the facility but do not want to be named for fear of losing their jobs. All four claim the company isn’t being transparent with its workforce about the potential spread of the virus at the facility.
Citing “an ever-changing situation,” Tyson tells CNN Business it will not confirm how many of the plant’s employees have been infected with the virus. It does say the Tyson Foods family is “deeply saddened” after the death of the employee who worked at the plant.

The four employees describe a workforce that is growing scared as they say cases of Covid-19 crop up. The employees say they are only learning of suspected and confirmed cases by speaking with friends and colleagues.
Tyson has agreed to compensate workers at a sister plant in Waterloo during its shutdown, but it did not comment on what would happen at the Independence plant if it were to close.
Tai Burkhart, director of the Buchanan County Public Health Department, tells CNN Business her department “is not aware of an outbreak in any manufacturing facility in the county.” The Tyson plant is located in Buchanan County.

All four employees say their fears of contracting coronavirus are exacerbated by Tyson saying their work is essential.
“Why are we working? It’s not like we’re feeding humans,” a plant employee told CNN Business. “We’re making dog treats; this isn’t essential. People can’t live off this.”
When asked to respond, Tyson pointed to guidance from the Department of Homeland Security, which lists “pet and animal feed processing facilities” among the type of production facilities considered essential. 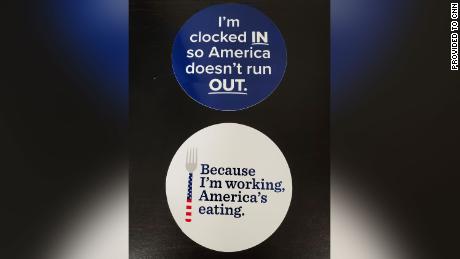 “I’m not willing to risk myself over dog treats,” a production line worker tells CNN Business, noting she has asthma. “It’s dog treats. It’s not dog food.” The Independence Tyson facility has tried to rally its workforce around its critical role. Two employees tell CNN Business they were given letters to carry with them in case of a state shutdown, declaring they were essential and needed to be allowed to travel to work. Two workers say the plant also handed out free swag to employees: t-shirts bearing the image of a fork and declaring “My work feeds the nation,” as well as stickers that say, “I’m clocked IN so America doesn’t run OUT,” and “Because I’m working, America’s eating.”

A climate of uncertainty, a lack of transparency

Managers have been given a list of “talking points” on how to notify “Close Contacts” of a confirmed case of Covid-19. According to company documents obtained by CNN Business, managers are not to reveal the name of the affected employee under any circumstances, but should tell close contacts: “We believe you may have been working in Close Contact with that person and may have had potential exposure.”
The company advises telling “Close Contacts” they will be “sent home today for quarantine with pay for at least 14 calendar days.”
But the employees who spoke with CNN Business say those conversations are not taking place. They have not asked for the company to reveal names, but they’re asking for better communication about their possible exposure. “No one officially says anything,” one employee lamented.
All four plant employees who spoke with CNN Business described an environment where it’s more common to receive information from colleagues, not management, about the latest Covid-19 procedures and risks.
A floor worker tells CNN Business at least one colleague with whom he worked closely has told him they tested positive for the virus. The floor worker says management has still not approached him about it.
Three of the employees who CNN Business spoke with say attendance at the plant is down as a result of a lack of clarity from management. Tyson confirmed to CNN Business that there has been absenteeism but would not comment on a specific cause.
“People are scared,” one employee said. “After the second case, people were like, ‘Deuces. We’re out.’ Literally, they turned around and walked out.”
Employee callouts have resulted in a reduction in the number of production lines the plant is operating, according to one plant worker. One employee did remark that management has been supportive regarding callouts and flexible about the company attendance policy.
“They’re not being a**holes about it,” she said. “But, at the same time, why not just take 14 days, get everything nice and clean and give people peace of mind?”
Tyson has broadly said that “we may sometimes suspend a day of production to complete an additional deep clean of facilities,” but would not address any potential cleaning closure at this specific plant.
Independence Mayor Bonita Davis told CNN Business that she has received calls from workers at the Tyson plant concerned about Covid-19.
“The average worker is very scared about it,” Davis said. She said the employees are worried about “getting the right protection” and “whether they’re safe.”
“I actually ended up kind of counseling them to calm them down,” Davis said.
Davis says she refers them to the county health department. That group’s director tells CNN Business they will work closely with the Tyson plant “in the event of an outbreak.”
“It is understandable why people may be on edge and anxious about Covid-19 spreading,” Burkhart said.

Although the facility in Independence makes dog treats, workers say the conditions are very similar to Tyson facilities that process food for people. Tyson says it is “implementing social distancing in our plants based on CDC and industry guidance.” But all four employees say problems persist. They want Tyson to do a better job of enforcing the measures it’s put in place.
“There are still several areas where you’re working within six feet of other people,” an employee who works on the plant floor told CNN Business.
All four employees shared concerns that crowding is unavoidable in multiple areas of the factory, naming places like the locker rooms, gear and equipment checkout, and the cafeteria.
Tyson says it has addressed concerns in the cafeteria, by reducing seating and adding plexiglass dividers at the cafeteria tables. The company says it’s working to “ensure social distancing” when employees remove their masks to eat, but the production line worker tells CNN Business it’s not enough. She says it’s harder to hear colleagues speaking when the dividers are up, so people lean around them to talk to each other as they eat. 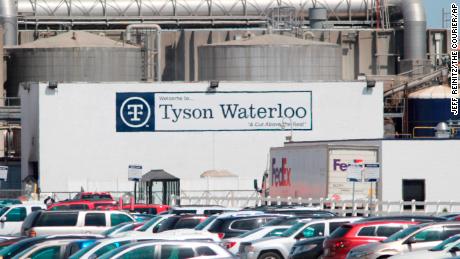 The company says they are also requiring and providing masks to employees, as well as providing instructions on how to wear a mask properly. But two employees told CNN Business that some colleagues were lax about wearing their masks, often not covering their noses with the masks, or removing them before leaving the plant.
At a recent company-provided lunch, one employee told CNN Business the company provided individual containers of food, presumably to cut down on cross contamination. However, the employee says there was also a cooler filled with soft drinks, and employees were all reaching in without gloves on.
“I wasn’t going to stick my hand in there,” she said.
Tyson told CNN Business that at some locations, they’re “allowing more time between shifts to reduce worker interaction.” But one employee said the Independence plant hasn’t staggered shift or break time to help with crowding in common areas. The same employee also said there are no limits on the number of people in the bathrooms.
Tyson says it is doing “additional deep cleaning and sanitizing in company facilities,” but workers are skeptical it’s happening at the Independence plant.
“I haven’t seen them do any increased cleaning,” the plant floor employee said. He told CNN Business he has been wiping down railings and door handles himself, out of concern it wasn’t being done.
However, the plant floor employee did say the plant put up some touchless hand sanitizer stations.
“Tyson has done well on this front — plenty of sanitizer around,” he said.
Another employee who spoke with CNN Business made the same observation, adding that while the plant has wipes available, “it’s not a new measure.”
As in other Tyson facilities, employees tell CNN Business that they now have their temperature checked before starting their shift. But unlike a larger plant like Waterloo, the temperature check is being done with a handheld thermometer, instead of with an infrared scanner. This practice has raised concerns over the value and accuracy of the temperature checks.
“Mine has been 94 degrees every day,” one employee said. “It’s not very accurate. Everybody knows that.”
Tyson says it is working on installing some 150 infrared temperature scanners at its plants but did not say if the Independence plant would be receiving one of those.

Calls to close the plant

All four employees who spoke to CNN Business want Tyson to shut down the plant for at least a few weeks to deep clean and thoroughly test its workforce for the virus. They say the risks are too high, especially after the death of their colleague.
The CDC guidance says that a facility that needs deep cleaning “can resume [operations] as soon as the cleaning and disinfection are completed.”
Two local officials tell CNN Business they do not have the power to close the plant. Those local officials did not express any opinion over whether employee concerns, potential cases, or even the death of an employee warranted a shutdown.
“With this being a health issue, it’s not necessarily a city’s responsibility,” Mayor Davis said.
Burkhart said that the public health department “would not recommend that a business be closed based solely on speculation.”
Asked what her criteria would be to warrant a shutdown, Burkhart explained she doesn’t “have a threshold as to when I would recommend closure.”
“If there were a closure order, that would have to come from the state level,” she added.
Iowa’s Governor, Kim Reynolds, emphasized that the state continues to have the authority to dictate closures at a press conference on Monday.
“But I want to continue to work with our local governments,” she added.
However, Reynolds has been reluctant to order any Tyson facilities to close. She has regularly stressed the important role Iowa plays in the nation’s food supply chain, citing statistics that say Iowa provides a third of the nation’s pork products.
The closure of the Columbus Junction and Waterloo plants were Tyson decisions, not orders by the state. In Waterloo, local elected officials and community leaders pressured the company to suspend operations.
One employee explained she’s frustrated by what she perceives to be a lack of concern from local and state officials. She said she’s also frustrated by her employer.
“I don’t trust them [to make the right decision],” she said. “I feel disappointed overall with the company and their decision, and the governor. Very disappointed.”
All four employees are worried it wouldn’t take much for their own small towns to be infected. Many employees commute to Independence for their work, from Covid-19 hotspots like Waterloo and Cedar Rapids. Many employees also live in smaller towns nearby.

“Why are we doing this?” one employee asked. “If they can’t get this under control, it’s just more cases and more cases.”
– CNN’s Dianne Gallagher and Pamela Kirkland contributed to this report.
Source: Read Full Article