Every day during the coronavirus lockdown, the government has hammered home the need for the public to take daily exercise. The irony is that the UK’s more than 7,000 gyms and leisure centres are shut, leaving the population to improvise with Joe Wicks on YouTube and cobbled-together workouts in the park.

More than 10m memberships were effectively put on ice when gyms closed in March, and we now know gyms will be among the last businesses to reopen come the summer. In the meantime, the industry is designing a new fitness regime to address the health warning hanging over shared treadmills, dumbbells and exercise mats. But will Britons ever want to sweat en masse again, and with restrictions in place, do the numbers add up for gym operators any more?

“We had a couple of bad days at the end of March when a lot of people started to cancel,” recounts Humphrey Cobbold, chief executive of PureGym, the UK’s biggest chain. “We froze our memberships instantly so nobody had a reason to cancel and when we researched why they were … nearly half were just cancelling all their direct debits saying, ‘I don’t want any money going out’.” 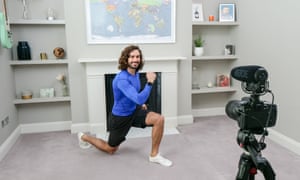 At last count the UK had 7,239 gyms, with around two-thirds run privately and the rest by councils or operators on their behalf. With 10.4m memberships, it is an £8bn-a-year industry that employs around 190,000 people – double that, if the likes of personal trainers are included.

The industry had enjoyed several buoyant years as no-frills chains such as PureGym and its listed rival The Gym Group gained momentum. Now expansion plans are on hold and businesses face an altered landscape.

David Minton, director of the Leisure Database Company, a market intelligence firm, sees tough times ahead in the short term with about 300 struggling sites vulnerable to permanent closure. He predicts about one in five people will ditch memberships. “All the sites that have been losing money will not reopen so that will be the first area of shrinkage,” he suggests.

There will also be a clearout of “sleepers” – a lucrative group who pay a membership fee for a service they never use. Around 12%, or 1.2 million, of the country’s gym members fall into this group, Minton says, but their monthly payments will have been stopped by clubs during the pandemic, effectively making the decision for them.

The other factor to consider is the “Joe Wicks effect”, Minton adds: “Have people actually got into a habit, and will that prevent them from going back into a gym where they may not necessarily feel safe?” 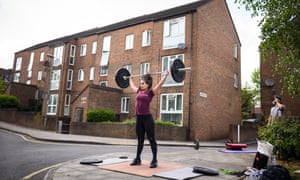 Ukactive, the industry’s trade body, has drawn up guidelines to help gyms get back to work. The advice includes spacing exercise equipment 2 metres apart or marking every other machine as out of order. A gym’s maximum capacity should be based on 3 square metres per person with the same maths applied to swimming pools. Markings could be drawn in a studio to ensure socially distanced zumba classes. But most importantly, it describes the need for a cleaning rota that would put Mrs Hinch to shame.

It will not be easy. Private equity-backed PureGym is trying to figure out a viable plan for a business which has a £760m debt pile after buying European rival Fitness World this year. Its 269 gyms closed and with 1.1m UK memberships in limbo, it has zero revenue.

When PureGym first reopens, Cobbold says, classes will be off the menu. “I think it’s true to say that studio operators who are purely about classes will struggle to break even at anything that’s consistently less than 50% occupancy,” he says. 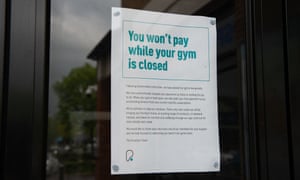 Huffing and puffing come with the territory in a gym. “There is inevitably an amount of sharing of equipment and people are doing exercise so they’re breathing sometimes quite heavily,” says Cobbold. High-use areas will be cleaned every couple of hours with PureGym’s premises closing at night for deep cleans. The purchase of expensive robot cleaners that use light beams to zap surfaces is also being weighed up, he says.

Gym goers will also have to become more hygiene-conscious. “You’ve got to get a discipline established in members,” says Cobbold. “You wipe down [equipment] before, you wipe down afterwards. If they are sensible, members will want to do that.” Wearing face masks is also on the cards. “If you’ve got an obligation to not transmit the virus to other people, then I think that’s a direction we’ll probably end up going in,” he adds.

The financial crisis triggered by the pandemic is also testing the partnerships between local authorities and leisure operators, typically charitable trusts, who run gyms and swimming pools on their behalf. Community Leisure UK, which represents such trusts, says some are at risk of going under after falling between the cracks of the state support schemes.

Huw Edwards, the chief executive of Ukactive, is concerned some contracts will end up being cancelled, which would mean leisure centre closures: “The government needs to provide ring-fenced funding to prevent communities losing their public leisure provision.”

For some sports, there is light at the end of the tunnel. The government is, for example, letting tennis courts reopen. Glenn Earlam, the chief executive of the upmarket David Lloyd chain, says tennis will resume at 26 of its centres this weekend and he is lobbying to use their outdoor spaces to host classes and to open outdoor pools, albeit beach-style with no changing rooms. “I’m struggling to see how opening the outdoors area of a David Lloyd isn’t safer than going into an indoor shopping centre,” he says.

With Britons more alive than ever to the risks associated with carrying extra pounds around their middle, when gyms reopen, members may be eager to return. “You don’t get many people with a treadmill or an Olympic lifting platform in their living room,” points out Cobbold. “We will go into an era where everybody is going to be taking better care of themselves. Your best preparation for a virus is being in good physical health.”