Vauxhall has unveiled a socially distanced manufacturing plan that it hopes will provide the blueprint for companies to make a safe return to work during the coronavirus lockdown.

Signs of new physical distancing measures are evident throughout the Vauxhall plant in Ellesmere Port, Wirral. Workers will be reminded to remain 2 metres apart on the factory floor by red tape hanging down from the factory roof.

Markings will also be evident throughout the plant, on floors, rest areas and even at urinals in the men’s toilets. 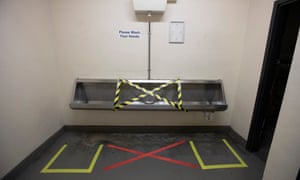 Vauxhall is taking the lead in the UK with plans that could see Ellesmere Port, where 1,100 employees make Astra models, reopen within weeks. The car industry across Europe has already started to reopen tentatively, after months of planning to adjust to the new reality of production during a pandemic.

Volkswagen will reopen plants in Germany and Slovakia on Monday. Japan’s Toyota this week said it would “gradually restart” production at its plants in France and Poland, with only one of its usual three shifts running at first. Its two UK factories are likely to remain closed until early May at least. The Swedish carmaker Volvo said its plants in Sweden and Belgium will reopen on Monday.

David Connell, the human resources director at Groupe PSA, which owns Vauxhall, told the Guardian that the company had been working on how to restart production as soon as it realised the coronavirus outbreak was spreading to Europe and the UK – as long as they could keep staff safe. 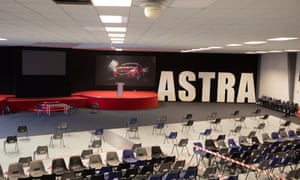 Groups of about 40 workers will be brought into be trained on the new measures, which include assigning separate entrances for different groups of staff, and even separate ashtrays in smoking areas. Work areas and toilets will be cleaned every hour.

Face masks and eye protection will be compulsory at all times. The company has also mined YouTube videos for ideas, such as visors made by cutting a slot in clear plastic. Workers can then push through the peak of a baseball cap for improvised protection.

UK government guidance does allow factories to keep running, but carmakers eventually closed every factory in the UK as the spread of the virus accelerated amid concerns for workers’ health. But even with lockdown measures extended, the government has been supportive of firms restarting production.

A UK government spokesman said: “Aside from non-essential shops and public spaces, we have not required any other businesses to close. This means manufacturers in England can continue to operate, as long as they follow our clear guidance to protect employees who cannot work from home and ensure work is done safely in the workplace.” 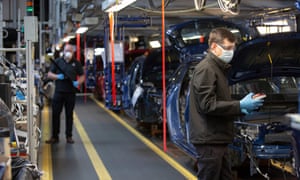 However, carmakers have privately expressed concerns that the lack of explicit industry-specific guidance has made some firms fearful of a backlash if they restart.

Matthias Holweg, a professor of operations management at the University of Oxford’s Saïd Business School, said reducing the rate of output was a key part of enforcing social distancing, as it would allow workers to be spaced further apart on the production line.

Carmakers hired consultants as early as January to help secure vital parts as factories started to close, and logistics networks are working at full stretch. The UK car industry’s lobby group on Friday said it was working with European counterparts and governments on how to “safely and successfully restart what is one of the country’s most valuable economic assets”.

Yet perhaps the biggest problem remains the certainty of recession. Companies will struggle to sell many of the cars they do manage to produce.

Holweg said he expects carmakers to build up about three months’ worth of stock, as they did during the financial crisis just over a decade ago – but “it’s an imperfect solution,” he said. Cars can be parked on airfields, but keeping them clean and maintained adds extra costs.

Showrooms will remain closed in the UK until the government allows “non-essential” shops to reopen, meaning it could be weeks or even months before sales start to return to anywhere near pre-crisis levels.