If you buy through our links, we may earn money from affiliate partners. Learn more.

Apple’s $329 iPad falls under that first category. With its spacious 10.2-inch Retina display, capable processor, and approachable price, it’s the best choice for anyone that just wants a basic tablet for web browsing, reading, shopping, watching movies, and checking email.

The $599 iPad Air, on the other hand, lands right in the middle. It has some of the iPad Pro’s qualities, like a nearly borderless screen, compatibility with Apple’s newest accessories, and USB-C charging. That makes it ideal for those who want a more powerful tablet with some of the elements of the iPad Pro, but isn’t quite as expensive.

Here’s a closer look at how the two tablets compare and what to consider when deciding which one is right for you.

Apple iPad vs. iPad Air: Which is better

Apple’s 8th-generation $329 iPad is the best Apple tablet for most people. It has the right combination of features for the price, making it a great choice for anyone looking for a general purpose tablet.

It’s missing some of the iPad Air’s bells and whistles, like a larger and sharper screen, more modern design with extra color options, the same faster processor that powers the latest iPhones, sharper cameras, and support for Apple’s newer Apple Pencil and keyboard case.

But these compromises don’t take that much away from the experience, and most people that simply want an iPad to watch Netflix, browse Facebook, read the news, or send emails will do just fine with Apple’s cheapest iPad.

The iPad Air has a noticeably better screen, sleeker design, a much better and faster performance among other improvements. But the iPad Air’s $599 price can be difficult to digest if you’re not planning to use it for more strenuous tasks than those mentioned above.

It’s probably best to think of the iPad Air as a budget iPad Pro. That’s to say it’s much better-suited for tasks like video and photo editing than the standard iPad given its faster processor, additional storage space, and sharper screen, but without the nearly $1,000 price tag. 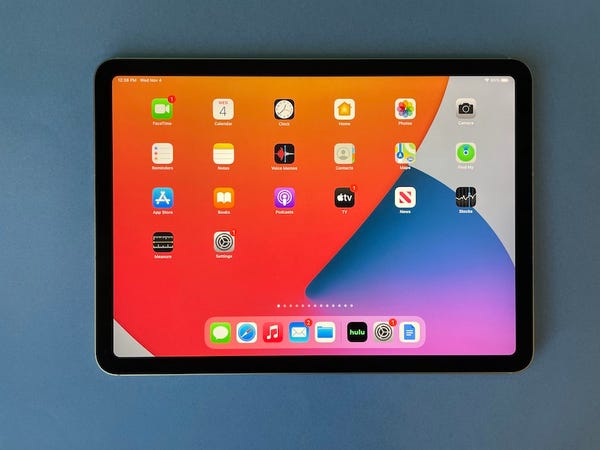 Apple gave the iPad Air a major aesthetic upgrade in 2020, and it’s one of the biggest factors that distinguishes it from its cheaper sibling. Apple’s mid-tier tablet has significantly slimmer borders framing its display and flat edges much like the iPad Pro and iPhone 12, while the $329 iPad still has Apple’s classic iPad design. It has the same chunky bezels above and below the display, curved edges, and the Touch ID home button as Apple’s older iPads.

The iPad Air also comes in more color options, with choices including silver, space gray, rose gold, green, and sky blue. The standard iPad, comparatively, only comes in silver, space gray, and rose gold. And of course, as its name implies, the iPad Air is thinner and lighter. The iPad Air is 0.24 inches thin and weighs 1 pound, while the iPad is 0.29 inches thick and weighs 1.08 pounds. Although it doesn’t sound like much of a difference, the iPad Air feels much more comfortable to hold for long periods of time while reading or gaming.

In terms of screen resolution, both iPads pack 264 pixels per inch. But there are some other technical differences to keep in mind that could impact the viewing experience. The iPad’s screen is missing some qualities found on the iPad Air such as full lamination, anti-reflective coating, support for the P3 wide color gamut, and True Tone. Of all these features, True Tone is probably the most noticeable one.

True Tone adjusts the color and intensity of your iPad’s display to match the lighting in your surroundings so that the screen looks more natural. It helps get rid of the blue-ish tint often found on the screens of electronic devices. But the difference is really only noticeable when looking at the two tablets alongside one another. 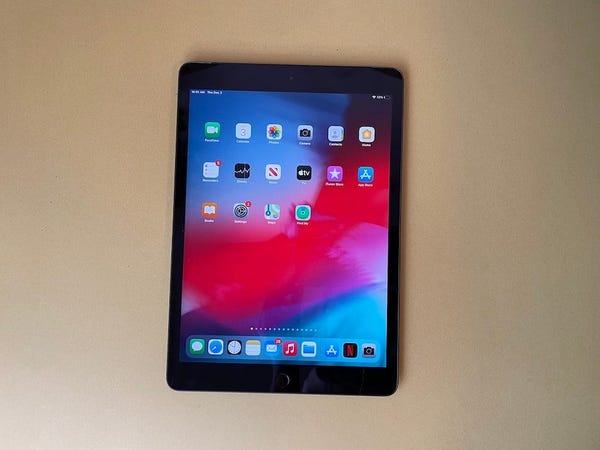 The iPad Air’s P3 support is also important considering it means this tablet’s display can show a wider range of colors compared to the standard iPads. This could be a difference to consider if you’re primarily looking for a tablet for photo or video editing and entertainment, as P3 support is one of the factors that makes a display compatible with HDR content, as B&H explains.

The iPad Air’s screen also includes Apple’s ProMotion technology unlike the regular iPad. This feature increases the iPad Air’s refresh rate up to 120Hz for smoother scrolling, which could be especially useful if you’re planning to use your iPad with the Apple Pencil for drawing and sketching.

Taken together, these enhancements made the iPad Air’s screen look richer with better contrast when watching video and playing games. However, the standard iPad’s screen is impressively bright and sometimes looks more luminous than the iPad Air’s, despite the fact that Apple says they both have the same 500 nit maximum brightness level. I also find True Tone to make the iPad Air’s display easier on the eyes for reading, but that’s a personal preference that may not apply to everyone. 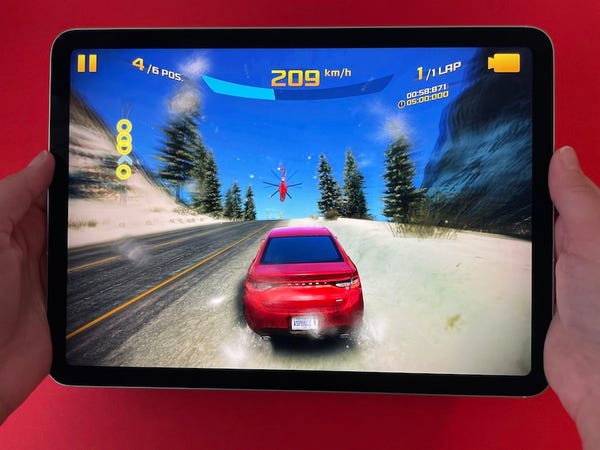 Another major difference between the iPad and iPad Air is in their processors. The iPad runs on Apple’s A12 Bionic processor, which powers the older iPhone XS lineup of smartphones, while the iPad Air runs on the same A14 Bionic chip that powers the current iPhone 12 series.

In everyday practices, the iPad Air feels slightly faster than the standard iPad. For example, it is able to export a 25-second HD video from Adobe Premiere just a hair faster than the regular iPad. (The iPad Air exports the clip in 5.6 seconds, while the iPad did so in 5.8 seconds). Apps also launches a bit faster on the iPad Air, although I wouldn’t say the iPad feels sluggish by any means.

Benchmark tests, however, suggest the iPad Air has much more power to unleash compared to the standard iPad when it comes to both general computing and graphics performance.

In a benchmark test called Geekbench 5 that’s meant to evaluate how a processor performs when handling everyday apps, the iPad Air’s A14 Bionic chip scored 1,588 on the trial that measures how a single core inside the processor performs and 4,234  on the part that monitors how its multiple cores work together. The iPad’s A12 Bionic chip, comparatively scored 1,114 and 2,677 respectively.

Cores are the units inside a computer’s processor that are responsible for carrying out operations.The single core score can be seen as an indicator of how the processor handles more casual apps that only use a single processing core to function, while the multi-core score evaluates how a processor runs more demanding apps and games that distribute the work among several cores, as Intel explains.

The iPad Air also scored higher in tests that measure graphics performance. In Geekbench 5’s compute test, which evaluates how a GPU performs when executing tasks like image processing, the iPad Air scored an average of 12,542 while the iPad scored 5,324 on average. Similarly, in the 3DMark Wildlife test, which simulates how processors handle games that rely on short bursts of activity, the iPad Air scored 8,925 with an average of 53 frames per second while the iPad scored 6,000 with 35 frames per second. 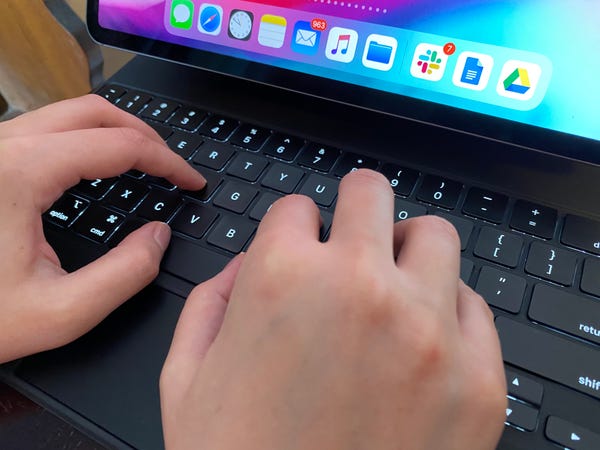 If you’re planning to use your iPad for work, accessories are an important part of the experience. Both the iPad and iPad Air are compatible with the Apple Pencil and Apple’s keyboard cases, but the specific models will vary.

Apple’s latest Pencil comes with a sleeker design and magnetically attaches to the iPad Air or iPad Pro for charging and pairing. The older Pencil must be plugged into the iPad’s Lightning port to charge and pair with the device.

And the Smart Keyboard, unlike the Smart Keyboard Folio, doesn’t offer protection for the back of the device when not in use. The Magic Keyboard is Apple’s top-of-the-line iPad Keyboard that features a trackpad and a floating design that makes it possible to adjust the iPad’s viewing angle.

But these accessories certainly add up. The first-generation Apple Pencil is priced at $99, while the Smart Keyboard costs $159. That means if you want to get more functionality out of the iPad through Apple’s accessories, you have to pay around $258 for both add-ons at minimum. The more advanced the accessory, the more expensive it is. The Magic Keyboard, for example, costs $299 on its own, making it nearly as expensive as the $329 iPad.

Storage is another important factor to consider when deciding between the iPad and iPad Air. The standard iPad is best suited for those who keep most of their files in the cloud since it only comes in 32GB and 128GB options. The iPad Air, meanwhile comes in either a 64GB or 256GB capacity, 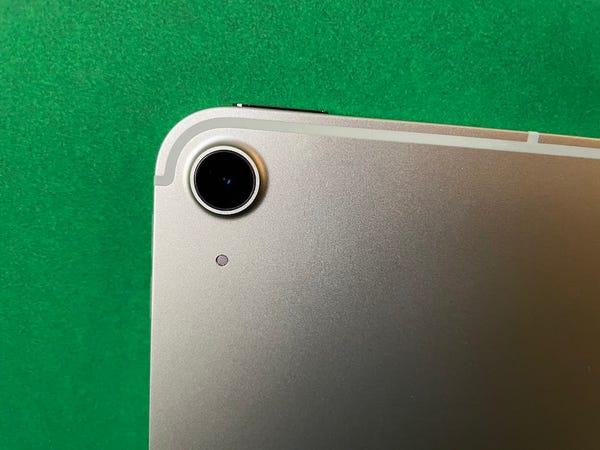 Most people probably aren’t taking photos on their iPads regularly, so the difference between the iPad’s 8-megapixel camera and iPad Air’s 12-megapixel camera might not matter that much. But it is worth considering that the iPad has a much lower resolution selfie camera than the iPad Air, which could be significant if you frequently make FaceTime or Zoom calls on your iPad.

Both tablets offer similar battery life, which impressed me during my testing when writing our full review. I’m able to get about 12 hours of battery life out of each tablet when using them for streaming video, checking email, occasionally playing mobile games, and other similar everyday tasks. That surpasses Apple’s claims of 10-hour battery life for each tablet. But as always, it’s important to remember that battery life varies depending on how you use your iPad.

It’s also worth noting that the standard iPad uses a Lightning connector to charge while the iPad Air uses USB-C like the iPad Pro. Which port is more convenient will depend on your preference. If you’re a loyal iPhone user and have plenty of extra Lightning cables lying around, you’ll probably appreciate that you can use any of these cables to charge your iPad too. But if you have a lot of other USB-C-powered devices, you might enjoy the flexibility that comes with the iPad Air’s more universal charging cable. 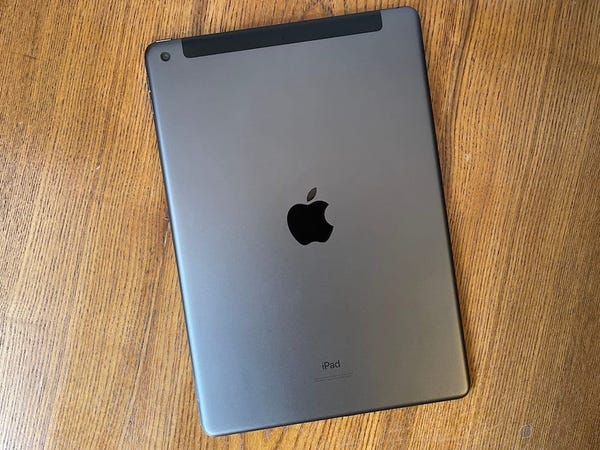 Overall, the $329 iPad is the right choice for most people. It’s powerful enough to handle most casual computing tasks and can last impressively long on a single charge. But if you’re willing to spend the extra money and know that you want features like a better display, sleeker design, and a sharper FaceTime camera for video chatting, consider the iPad Air.

All told, unless you really need more powerful performance, the iPad Air’s improved screen and lighter build are its biggest advantages over the standard iPad.

To put it simply: the iPad can do just about everything the iPad Air can do, so you won’t be making any major compromises. The iPad Air just does all of these things a little bit better, but for nearly twice the cost.

You can purchase syndication rights to this story here.

Disclosure: This post is brought to you by the Insider Reviews team. We highlight products and services you might find interesting. If you buy them, we get a small share of the revenue from the sale from our commerce partners. We frequently receive products free of charge from manufacturers to test. This does not drive our decision as to whether or not a product is featured or recommended. We operate independently from our advertising sales team. We welcome your feedback. Email us at [email protected]