Well-intentioned billionaires have taken it upon themselves to turbocharge the clean energy transition – but are they really doing more harm than good?

Simon Holmes à Court is partly financing the climate-focused “teal” independents, but this week came under fire in The Australian for allegations of conflicts of interest due to his extensive investments in renewable energy companies. 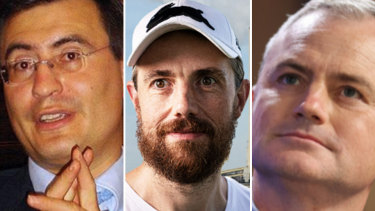 Are billionaires helping or hurting the climate movement? Credit:The Age

While Holmes à Court has been open about his investments, the reports were quickly seized on by Liberal incumbent Dave Sharma and threaten to cause headaches for candidates campaigning on platforms of integrity.

The bid failed and soon after, Energy Minister Angus Taylor sought to make it harder for coal plants to close by proposing to extend the notice period for plant closures from 3.5 years to five.

Each year at corporate annual general meetings, investors have an opportunity to vote on a range of governance matters at the companies in which they invest.

The most common shareholder vote is on the remuneration report. This mechanism, while non-binding, has given shareholders an opportunity to vent their fury at corporate mishaps and has widely been regarded as spurring on much-needed reform for how executives are paid.

However, in recent years, there has also been a rise in the use of shareholder votes on climate change. These are usually in the form of a “special resolution” which require 75 per cent support to succeed. None have passed in Australia but significant backing for protest resolutions against Woodside and Santos have been chalked up as wins.

Hohn has sought to create a novel way to use shareholder resolutions to promote greater corporate action on climate change.

Under his plan, boards voluntarily put forward climate plans each year for shareholders to vote on. The plans typically involve emissions reduction targets and the transition of operations to a low carbon world.

The system flips the dynamic from being an antagonistic shareholder push to proactive, company led response to demands for greater corporate action on climate change.

The initiative has been celebrated for encouraging transparency, with high-profile support from Mark Carney, former Bank of England governor turned green investor, who said it establishes “a critical link between responsibility, accountability and sustainability”.

The first round of resolutions have been met with enormous support. New analysis from the Australasian Centre for Corporate Responsibility (ACCR) shows all votes passed with more than 80 per cent support.

However, the movement raises a few key concerns: Are investors simply rubber-stamping dud plans? And, will it mute investor protest votes on climate?

ACCR head researcher Dan Gocher says the widespread support indicates investors are rewarding companies for being first movers, rather than the strength of their commitments.

The ACCR, which has also received funding from Hohn, analysed the climate plans of many of the heavy emitters, including BHP, Shell and Glencore, and found many failed to align with the goals of the Paris Agreement.

The bulk of the plans did not account for scope 1, 2 and 3 emissions (meaning the total emissions associated with the company) and few aligned capital expenditure with real-world emissions reductions.

The ACCR has called on investors to better scrutinise plans by asking key questions, such as: Is the company expanding fossil-fuel production? Will emissions be materially reduced before 2030? Has the company committed to aligning its lobbying with climate action? And, are climate targets linked to remuneration?

If the answer is “no”, shareholders can vote against it.

Billionaires are using their clout and cash to agitate for greater climate action. But are these efforts only working to preserve the existing state of affairs? Only time will tell. And time is running out.