China expecting economy to return to ‘proper’ range in 2021

China will likely return to a more "proper" range of economic development next year, Premier Li Keqiang said, indicating a strong rebound in growth after this year's pandemic slump.

After taking a severe knock in the first quarter, the economy is recovering and set to post positive growth this year, Li said at a joint media briefing alongside the leaders of six international economic institutions, including the International Monetary Fund and World Trade Organisation. 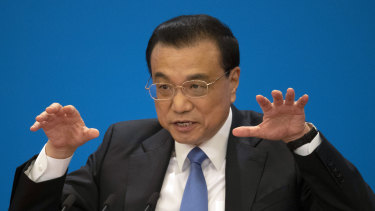 Li Keqiang said China doesn’t deliberately target a trade surplus, an issue that’s been a source a tension with the US.Credit:AP

"We expect China's economy will return to the proper range of development next year," he said. "China's macro policies will remain stable, effective, and sustainable."

Li reiterated China's economic strategy of allowing consumption to play a leading role in driving growth, and gradually opening up to foreign investors. He said China doesn't deliberately target a trade surplus, an issue that's been a source a tension with the US.

"We will absolutely not pursue a trade surplus," Li said. "We will maintain equal importance for imports and exports. We want to achieve trade balance and sustainable development."

China recently laid out its five and 15-year plans for the economy, outlining an ambition to double the size of gross domestic product by 2035, with a focus on self-reliance in technology and boosting domestic consumption. The economy, the second-largest in the world, is the only major one tipped to expand this year – by about 2 per cent, according to economists surveyed by Bloomberg – after authorities brought the pandemic under control and began easing lockdown restrictions months ago.

Angel Gurria, secretary-general of the Organisation for Economic Cooperation and Development, said at the same briefing that China's economy could expand about 8 per cent in 2021, before easing to about 5 per cent. Li didn't give a forecast for growth.

Kristalina Georgieva, managing director of the International Monetary Fund, said at the briefing that some countries may be losing momentum as they deal with new waves of virus infections. She added that vaccines and treatments should be made available to everyone.

According to a separate government statement, Li said at the meeting that China will use reforms to promote the economy's recovery and will continue its active fiscal and stable monetary policies. He also said China welcomes more countries joining the Regional Comprehensive Economic Partnership trade pact, which was signed earlier this month.