Death to Davos: It might be time to end the global elite’s annual schmoozefest

The millionaires used to showing off their wealth by ordering buckets worth of champagne and sparklers in exclusive nightclubs have had much of their partying interrupted by the pandemic. This New Year’s Eve, with Omicron cases rising rapidly, many were forced to ring in 2022 from inside their homes with no onlookers in sight. Status-seeking must wait another year.

The global elite who would have headed to the small Swiss town of Davos next month have to accept a similar fate. The annual VIP gathering hosted by the World Economic Forum has been delayed again due to concerns over COVID-19. The important people who pay big money to go to the highest town in Europe to meet other important people are forced to wait again. Like the revellers unable to splash their cash in expensive nightspots due to restrictions in some parts of the world, the status-seeking among the Davos crowd has been crossed off the calendar this winter. There are no onlookers in sight. 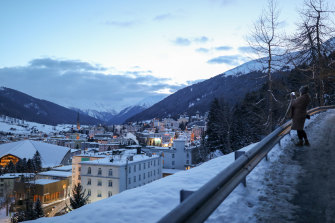 If Davos does go ahead at some point this year, the world will be watching closely. Credit:Bloomberg

Perhaps it should stay that way. Davos is starting to look as out of date as a 30-litre bottle of champagne with a sparkler in it. From the hierarchical colour-coded badge system showing how important each guest is to the extortionate costs involved, it is difficult to see what the point of the annual jamboree is, beyond networking. Since its inception in 1971 the aim has been to bring powerful people together so that they can collectively do good for the world. But too often the summit seems to be little more than a talking shop for those who already have a platform. An “experience” detailing the plight of refugees has, in recent years, attempted to address this disconnect by using role play to create more empathy among guests, typically the world’s top 1 per cent of earners. Those who attended Davos in January 2020 included 119 billionaires and 53 heads of state. Although more people from different walks of life are being invited to the conversation, it still seems that those with the loudest voice at Davos have the loudest voice outside of Davos. Regardless of whether they head to the Swiss Alps and spend £32 ($60) on a hot dog, their opinions will always be heard.

Some have already thrown in the towel. Abrdn’s former boss Keith Skeoch said last April that the investment giant would pull out of the meetings, which cost the firm around £3m a year. While activists and politicians get in free, company representatives are forced to pay a reported Sfr60,000 ($90,800) to be a low-tier WEF member and a further Sfr27,000 to attend the four-day event. Annual membership fees for higher tiers are said to cost as much as Sfr600,000. At a time of crisis the “very idea of a global elite meeting in a Swiss ski resort is divisive”, Skeoch told the Daily Mail last year. The money saved on sending executives to Davos would instead go to dementia helplines, food banks and deep-cleans for care homes instead.

In political circles, there have been fears about how hobnobbing with VIPs on the slopes might look. Boris Johnson ordered his ministers to boycott the January 2020 gathering so that they are not seen sipping champagne with the world’s wealthy. Harvard professor Samuel Huntington, who coined the phrase “Davos Man”, wrote in 2004 that a new global elite had emerged.

The pandemic could spell the end for the get-together if it fails to acknowledge its flaws.

Organisers have repeatedly argued that the conference is not a “junket for the jet-set”. The point is to discuss the key problems facing the world, raise important issues and then collectively come up with a plan. The good intentions are there. But talking about problems doesn’t mean they are fixed.

Getting in a private jet to discuss climate change makes no sense. The mysterious virus that was spreading across China during the January 2020 summit almost went unnoticed. A major global crisis had already begun, but attention was focused elsewhere (the strapline for that year’s event was “Stakeholders for a Cohesive and Sustainable World”). The alarm was only briefly sounded by speakers, with a scientist from the Coalition for Epidemic Preparedness Innovations – launched at Davos in 2017 – pointing out during one panel discussion that “perhaps this is the coronavirus that we’ve been fearing” as it is more easily transmissible and could become a disease which causes “hundreds of thousands of deaths, or even millions”.

The following month, JP Morgan boss Jamie Dimon joked that he had “this nightmare that somehow in Davos, all of us who went there got it, and then we all left and spread it. The only good news from that is that it might have just killed the elite”.

The world has changed dramatically since then. If Davos does finally go ahead this year as its organisers hope, then it must be different. The pandemic could spell the end for the get-together if it fails to acknowledge its flaws. A more diverse group of people need to be invited to the table. Scrutiny of the delayed event will be high. Social inequality has worsened during this pandemic.

Forbes’ latest annual world billionaires list shows that the rich have only got richer, with almost 90 per cent of the world’s billionaires wealthier than they were a year ago. More people are now flying private despite the climate crisis. If and when the Davos set get their VIP party back, the world will be watching.