Economic rebound was the easy bit, but ‘recovery’ could take an eternity

If you’re not careful, you could get the impression from this week’s national accounts that, after huge budgetary stimulus, the economy is recovering strongly and, at this rate, it won’t be long before our troubles are behind us.

The Australian Bureau of Statistics issued figures on Wednesday showing that the economy – real gross domestic product – grew by 3.1 per cent over just the last three months of 2020. This followed growth of 3.4 per cent in the September quarter.

When you remember that, before the virus arrived, the economy’s average rate of growth was only a bit more than 2 per cent a year, that makes it look as though the economy’s taken off like a stimulus-fuelled rocket. 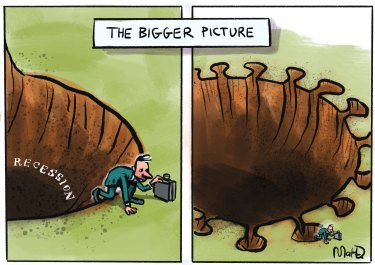 Even the weather is helping. The drought has broken and we’ve had a big wheat harvest. We keep hearing about the Chinese blocking some of our exports, but much less about them going back to paying top dollar for our iron ore. This represents a massive transfer of income from China to our mining companies and the federal and West Australian governments.

So much so that our “terms of trade” – the prices we get for our exports compared with the prices we pay for our imports – improved by 4.7 per cent in the December quarter, and by 7.4 per cent over the year.

Sorry. It certainly is good, but not as good as it looks. The trick is that you can’t judge what’s happening as though this is just another recession. It’s called the coronacession because it’s unique – sui generis; one of a kind.

Normal recessions happen because the economy overheats and the central bank hits the interest-rate brakes to slow things down. But it overdoes it, so households and businesses get frightened and go back into their shell. The fear and gloom feed on each other and unemployment shoots up. (If you’ve heard of poets’ license, economists have a licence to mangle metaphors.)

This time, the economy was chugging along slowly, with the Reserve Bank using low interest rates to try to speed things up, when a pandemic arrived. Some people were so worried they stopped going to restaurants and pubs. But to stop the virus spreading, the government ordered many businesses to close and the whole nation to stay at home.

Knowing this would cause much loss and hardship, governments spent huge sums to help individuals and firms, including the JobKeeper wage subsidy (intended to discourage idle firms from sacking their workers), the temporary JobSeeker supplement (to help those workers who were sacked), help business cash flows and much else.

The politicians and their econocrats assured us this would be sufficient to hold most of the economy intact until they’d be able to lift the lockdown. Despite much scepticism (including from me), this week’s figures offer further proof they were right.

If it had, it would have been easier to see what it was: not the start of a “recovery”, but just the rebound when businesses are allowed to reopen and consumers to go out and shop.

But the need of our second biggest state, Victoria, to impose a second lockdown – which wasn’t lifted until November – has seen the rebound spread over two quarters, with a bit more to come in the present, March quarter.

Consumer spending grew strongly in the December quarter, even though the wind-back of federal support measures caused household disposable income to fall by 3.1 per cent. How could this be? It was possible because households cut their outsized rate of saving.

Note that, by the end of December, the level of real GDP was still 1.1 per cent below what it was a year earlier. Economists figure we’ve rebounded to about 85 per cent of where we were. But what happens when, after the present quarter or next, we’re back to 100 per cent?

Will we keep growing at the rate of 3 per cent a quarter? Hardly. The easy part – the rebound – will be over, most of the budgetary stimulus will have been spent, and it will be back to the economy growing for all the usual reasons it grows. 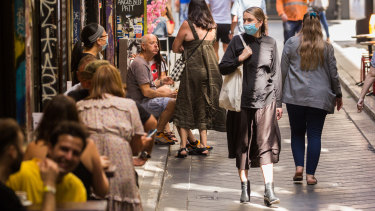 Will it be back to growing at the 10-year average rate of 2.1 per cent a year recorded before the virus interrupted? If so, we’ll still have high unemployment – and no reason to fear rising inflation or higher interest rates.

But it’s hard to be sure we’ll be growing even that fast. On the Morrison government’s present intentions, there’ll be no more stimulus, little growth in the population, a weak world economy, an uncompetitive exchange rate thanks to our high export prices and, worst of all, yet more years of weak real growth in income from wages. The “recovery” could take an eternity.

Start the day with major stories, exclusive coverage and expert opinion from our leading business journalists delivered to your inbox. Sign up here.