Federal Reserve chair Jerome Powell said the US economy has a long way to go before fully recovering from the coronavirus pandemic and will need further support.

"The path forward will depend on keeping the virus under control, and on policy actions taken at all levels of government," he told the House Financial Services Committee on Tuesday (US time). While a recovery is underway, "both employment and overall economic activity, however, remain well below their pre-pandemic levels, and the path ahead continues to be highly uncertain." 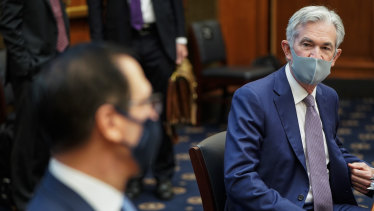 In his own remarks, US Treasury Secretary Steven Mnuchin said he and the White House continue to seek an agreement with both parties in Congress on another fiscal relief package.

"The President and I remain committed to providing support for American workers and businesses," he said in testimony released on Tuesday. "I believe a targeted package is still needed, and the administration is ready to reach a bipartisan agreement."

Powell and Mnuchin's appearance is a quarterly exercise mandated by the Cares Act passed by Congress in March, which appropriated about $US2 trillion ($2.8 trillion) to help speed the US recovery. The pair faced questions about their use of Cares Act funds and about what else should still be done.

Prospects for another round of fiscal support have further dimmed amid spiralling partisan tension over the battle to replace Supreme Court Justice Ruth Bader Ginsburg, with just 42 days remaining before the US election.

As expected, Powell and Mnuchin fielded numerous questions about the troubled Main Street Lending Program, a $US600 billion Fed facility backed by Treasury funds aimed at providing credit to small- and midsized companies. It has so far only purchased $US1.5 billion in loans.

The two officials diverged on the advisability of lowering the minimum loan size for the program, with Mnuchin embracing that potential while Powell said smaller loans would require a brand new facility or would be more appropriately done through the Paycheck Protection Program, which extended forgivable loans to small firms.

Mnuchin also made clear he's eager to reallocate funds initially appropriated under the Cares Act to act as a loss buffer for Main Street and other emergency lending programs that may no longer be needed.

"We would like to spend that money on other areas of the economy that could be better served," Mnuchin said. "Unfortunately, we do need Congressional authority to use it in other areas."