‘Getting punched in the face’: Investors brace for iron ore falls as China tensions linger

The key steel-making material’s price has seen its value halve since record-breaking highs of $US230 per tonne in May, which caused stock values of ASX-listed producers such as Fortescue Metals, Rio Tinto and BHP to fall sharply last week.

Atlas Fund Manager’s chief investment officer Hugh Dive said he has had a “negative bet” on iron ore for months and the sharp declines in the sector were not a surprise. 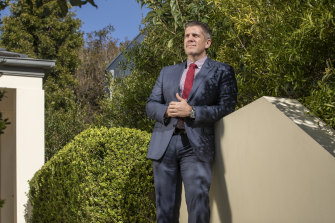 “It’s getting punched in the face most of this year, then it’s all made up in the last four to five weeks,” he said. “We went zero weight in Rio, FMG and BHP. So, I’m very happy about that.”

The Chinese government on Friday slammed the new trilateral security partnership between Australia, the US and the UK, claiming the pact would intensify the arms race and “undermine regional peace and stability”.

However, Mr Dive dismissed any link between the establishment of Aukus and falling iron ore prices, saying long-term demand destruction would come from China developing domestic iron ore capabilities or Brazil increasing supply. In the short-term, Mr Dive said China’s winding back of steel production ahead of the Beijing Olympics would play a greater role in iron ore’s price outlook.

“It keeps on going down for reasons not related to Australia,” Mr Dive said. “It’s not about punishing Australia for having the temerity to get nuclear-powered submarines. It’s more because they have the Winter Olympics coming up.”

China’s quest for “patriotically blue” skies ahead of the games, Mr Dive said, would starve demand for Australian iron ore and have flow-on effects for domestic tax revenue. “The Chinese aren’t looking to do the Australian taxpayers any favours at any moment. It’s going to impact the Australian budget, [Treasurer] Frydenberg is not looking as smug as he did a few months ago.”

Plato Investment Management managing director Don Hamson said China’s slowing property market and its crackdown on pollution would cause softer iron ore prices for the remainder of this year.

“It was probably a bit hyped in late May, early June, those peaks were probably a bit illusory, a bit exaggerated,” he said. “Now it’s come back with a thud.”

After a bullish approach to the sector early last year, Mr Hamson has “trimmed back” the major iron ore producers from Plato’s Australian equities portfolio in recent weeks, and said while it was possible China could implement further trade sanctions over political issues, iron ore was unlikely to be a target.

“I don’t think they have the capacity to replace Australian iron ore,” he said. “They do have plenty of iron ore in China, but it’s very low quality. That’s not going to be the right thing for pollution.”

Holon Investments managing director Heath Behncke said the iron ore price was undergoing a correction after reaching $US200 per tonne but geopolitical tensions would not have a material impact on China’s demand for the resource in the short-term.

“Strategically, it’s very hard for the Chinese near-term to change their dependency on Australia for iron ore. That’s a very long-term conversation. They are looking to diversify their sources, but it’s not as easy as people think to do that.”

However, Mr Behncke questioned the long-term strategy of aligning Australia’s defence capabilities to the US. “While the US today is a very strong economy, most economic indicators you look at show by the end of this decade, China will be larger than the US,” he said. “So you ask yourself, who are we hitching our wagon to?”

Mr Behncke added China had historically not pursued an aggressive foreign military strategy and said the domestic economy would benefit from retaining good relations with our largest trading partner. “China has historically been more bark than bite,” he said. “Are we biting the hand that feeds us in that way?”