Not so radical: The economic voices around Biden as he prepares for office

Joe Biden is inching his way to the White House after the most divisive election in decades – but now attention turns to the appointments that will shape his administration if he finally wins through.

The 77-year-old looks to have all but won the presidency with the backing of a Left-of-centre Democratic Party, although experts suggest his key picks are likely to be more moderate, while ambitions for the next four years will be hamstrung by a Republican Senate.

Despite calls among some progressives, Senator Elizabeth Warren – advocate of a billionaires' wealth tax and Biden's main opponent for the nomination – is unlikely to get near the job of Treasury secretary. 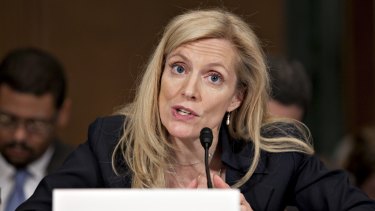 Lael Brainard​ could become the new US Secretary of the Treasury.Credit:Bloomberg

The hot favourite to replace Steve Mnuchin is instead the Federal Reserve board member Lael Brainard. The 58-year-old, a former Treasury official who served in the White House under Bill Clinton, is vastly experienced and "would ease market concerns of a more radical, progressive agenda with regards to economic policy", according to James Knightley, chief international economist at ING.

That said, in Kamala Harris the president-elect chose a running mate almost as radical as Warren, according to Washington-based policy research firm Beacon Advisors, influencing his other choices of personnel.

"We view it as likely that the Biden administration will look to use these appointments as an opportunity to appease the progressive wing of the Democratic Party," the firm said.

Biden has drawn on a large network of economic advisers, but attempted to keep their involvement a secret and barred them from publicly confirming their roles in the campaign.

The key voices however are led by 43-year-old Ben Harris, a tax and budgeting expert steeped in Washington's think-tank world who was Biden's chief economist from 2014, when he served the vice-president under Barack Obama.

Harris is the details man, seen as a potential director of the new president's National Economic Council, who could help shape plans including big tax rises on business. Of the $US4 trillion ($5.5 trillion) in extra taxes originally pencilled in over the next decade, more than half comes from business, including the unwinding of half of Trump's corporation tax cut by taking the rate back to 28 per cent.

Also likely to feature in the administration shake-up is long-time economic adviser Jared Bernstein, who worked for Biden in Obama's first term. Bernstein has spoken out on issues such as the need for a higher minimum wage and the downsides of globalisation.

He told The Sunday Telegraph in October: "There is a key role for the government to play in making sure that working people get a fair share of the growing economy, and one of the most important aspects of that role is making sure that workers have the bargaining power they lack."

Compromises in the Senate

A third key voice is Heather Boushey, a former adviser to Hillary Clinton, and one of the leading progressives in US economics as head of the Washington Centre for Equitable Growth. Boushey last year wrote the American economy was "getting bigger, but not better" and that a "rising tide can't lift all boats".

In practice, however, the extent of Biden's ambitions will be curbed by the Democrats' failure to win the Senate, forcing him to rely on Republican votes to pass legislation. That may mean more borrowing, Knightley adds: "We suspect the bar is high to implement tax hikes with a Republican Senate, so the risk is for a structurally wider fiscal deficit."

One decision that the hopeful president elect also doesn't have to make immediately is whether to keep on Fed chairman Jay Powell, regarded to have had an excellent crisis after pouring on trillions in wide-ranging stimulus during the early stages of the pandemic.

Powell's term expires in early 2022 but keeping on the central banker – who has taken regular insults on Twitter from Trump during his tenure at the White House – would also give Biden the chance to thumb his nose at his Republican predecessor.