Out of the box: a guide to the best UK restaurant meal kits

Restaurant doors may be closed but chefs are boxing clever. Takeaways have evolved into home-delivery kits, and chefs who may never have envisioned their food being reheated and plated up outside of their restaurants are now packing and sending meals to homes all over the country.

These kits – a lifeline for an industry hit hard by the coronavirus pandemic – have proved popular. Restokit, one of several platforms offering a choice of different restaurants’ kits, has been taking about 1,000 orders a week for meals from businesses such as the family-run Sri Lankan restaurant Kolamba. The London pasta joint Padella is delivering up to 250 kits of freshly made pappardelle, pici and sauces nationwide every day. And numerous Valentine’s Day boxes have already sold out.

“They’re not only a commercial enterprise,” says the restaurateur Mitch Tonks, “you’re bringing people a bit of joy in all of this.” His first box from the seafood group Rockfish, which is based in Devon and Dorset, went on sale before Christmas and sold out within hours. “I really didn’t know what to expect and I was gobsmacked by the demand,” he says. The boxes, which are designed for two people to have as a meal, are back and, once again, proving popular. For £80 you get scallops with garlic butter, white wine and breadcrumbs, turbot T-bones, tartar sauce, smoked salmon, anchovy mayonnaise and canned sardines. Tonks says: “We can’t go out, so giving people things they can do at home feels like the right thing.”

Simon Rogan, whose restaurants include L’Enclume and Rogan & Co in the Lake District, was an early adopter of meal kits, in the form of Simon Rogan at home. “The restaurants were shut down at very short notice, so we had lots of produce left and produce from the farm,” the executive chef, Tom Barnes, says. “We started with almost boil-in-the-bag meals for the local community, which we were charging a small amount for. This meant we could donate 50% of meals to hospitals and locals who were shielding.” 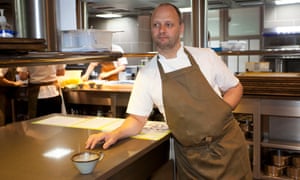 This soon evolved into a three-course menu delivered nationwide, which regularly sells out. “People want to keep supporting the restaurant, which is amazing and obviously a big help,” Barnes says. “Some people buy the boxes because they like cooking but, at the same time, we don’t want to give them too much to do.” You may, for example, unpack a short rib of beef which has already been cooked for 24 hours, which you then sear and warm through in the oven at home.

Starting at £45 a person (you could add a wine flight or cheese course), it is roughly what you would expect to pay for a three-course meal at Rogan & Co. “It’s a little cheaper but not far off,” Barnes says. “We’re not serving anything we wouldn’t be happy to serve in the restaurant.”

Smaller restaurants too have turned to click and collect and neighbourhood delivery, so if you have a local favourite it is worth checking its website in case you are able to continue to support it with orders. 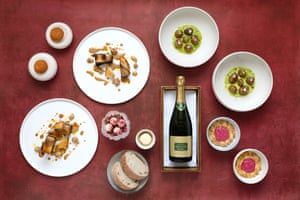 “It’s about giving people a good meal for good value,” says Lisa Goodwin-Allen, the executive chef of the Michelin-starred Lancashire restaurant Northcote, whose gourmet boxes cost £105 for two (the gourmet menu in the restaurant is £85 a person). Her boxes have included a whole crown of chicken, with brioche, butter and herbs stuffed under the skin, and cod with a curry sauce it’s unlikely you would attempt making at home.

“To do the food we do at Northcote in a box is quite difficult,” Goodwin-Allen says. “You can’t do the technical dishes that we do in the kitchen, so we have to think cleverly about the taste and if it will travel, so people still get that feeling of what we’re about.” This approach, coupled with a small number of chefs (the majority are furloughed), means Northcote can only make up to 350 boxes a week. 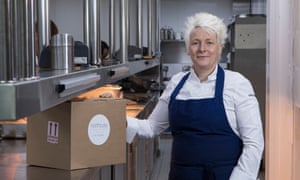 The amount of packaging required to transport these meals is, of course, a concern. “It took a lot of time to get it right, and it does every time we create a new menu,” Goodwin-Allen says. Her boxes are packed with compostable or recyclable sheep’s wool and contain recyclable or reusable ice packs and plastic. “Obviously, you want it all to be recyclable,” she adds, “but it’s also got to look amazing when it arrives at your home.”

While meal kits are never going to replace the experience of dining out, they are an opportunity to try menus from around the country, and they’re enjoyable. “When I got a box from Hawksmoor for my family, it created an occasion and was really good fun,” Tonks says. “It’s not a fad.”

Some restaurants are investing in making them available even when we can go back out to eat. “We’ve found a site close to the restaurants which we’re kitting out at the moment, so we have a designated space for the boxes,” Barnes says. “We’ve got a team ready to continue doing them.”

Tonks, who is developing a similar venture, adds: “It’s a new world. In the past it was hard to get your head around buying your meat, smoked salmon and bread online but now my house has a box turn up virtually every other day and it’s kind of exciting.”

What you can get

Charges for delivery can depend on where you live, whether you want to receive your food on a weekday or weekend and on how much you order, so some of those indicated are starting prices. 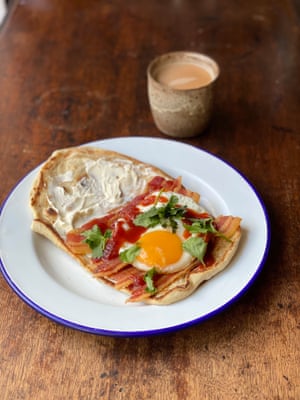 “I am the only person I know never to have had a Dishoom breakfast naan – I don’t queue for anything on a Sunday morning, not even a bacon sandwich. Or at least, I didn’t. Its at home kits mean I can finally embrace the hype in the comfort of my pyjamas, closely observed by my significant other, the dog.

“Although cooking the naan is slightly more time-consuming than opening a bag of white sliced, it’s more fun, too – 30 seconds in a hot frying pan followed by 45 under the grill – and they give you an extra ball of dough to practise with, though it’s also useful if you need to stop your partner barking at the top-notch bacon. 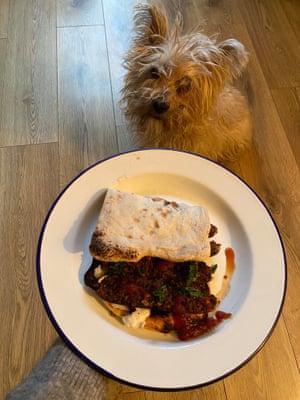 “Wilf helps me polish off the seriously impressive vegan sausage version the next morning, too, which is high praise indeed, given his usual attitude to plant-based foodstuffs. In fact, the only thing I don’t share with him is the vat of gloriously aromatic masala chai, which, unlike him, makes the kitchen smell gorgeous for days.

“NB: for every kit purchased, Dishoom donates a meal to the Magic Breakfast charity for hungry kids.”

Bacon, and vegan sausage naan kits, both £16 from store.dishoom.com; each serves two. Deliveries nationwide, from £5. 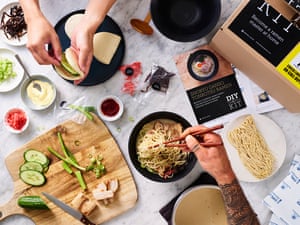 For those not inclined to spend 12 hours whipping up a ramen broth. This ramen kit takes 10 minutes, and toppings include char siu barbecue pork belly, beni shoga (red ginger) and kikurage mushrooms. Vegan options are available.

From £20 for two, restokit.co.uk. Deliveries nationwide, £5.

Curries from the chef Sat Bains inspired by his Punjabi heritage, and based on the recipes from his mother. Recent dishes include saag aloo, chickpea curry (sholay), mung bean dal, and brussels sprouts sabji. 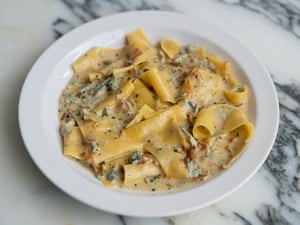 DIY kits from the much-loved London pasta restaurant – just without the queue. Expect tagliarini with slow-cooked Sardinian tomatoes, the justly lauded pappardelle with beef shin ragu, and pici with sausage, fennel and chilli. Optional (but encouraged) extras include a Seville orange marmalade negroni.
From £14 for two, shop.padella.co. Deliveries nationwide, from £6.

The Sri Lankan and South Indian-inspired kits from the restaurant’s Cash & Kari store include lamb or paneer kothu roti and a breadfruit kari, with both including snacks, banana chips or Jaffna mix respectively, to keep you going while cooking.
From £25 for two, hopperscashandkari.com. Deliveries nationwide, £15. 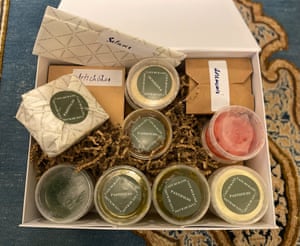 “Alone, needing an almighty pick-me-up, I open the premium-feeling box from Angela Hartnett’s lauded Cafe Murano. It is almost Valentine’s Day, so perhaps an Italian will put me in the mood? I mean any mood that isn’t pervasive epochal despair. We start easy. Cicchetti (Venetian starters) are simply warmed in the oven. Baby artichokes finished on a grill are gorgeous – lemon and smoke concentrated especially in their delectable stems. The focaccia is exemplary: crackling crust, snowflakes of salt and the most salacious crumb imaginable, oily, pillowy, nigh indecent. Salumi is spectacular. Highest praise, though, goes to the arancini: fungal bon bons, oozing a heady payload, are a nuclear success, putting me on mushroom cloud nine. 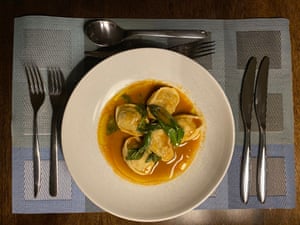 “Things get stickier with crab tortelloni. Literally – the pasta shells are so fresh and thin that tearing is a problem. I patch a few with flour but save every shell, thank the stars. The dish that emerges – juicy parcels of lovingly flaked crab, bathing in glossy crab stock, cut by basil vinaigrette – is the standout of the meal. My generous main, osso bucco on risotto Milanese finished with gremolata is impeccable, falling off the bone and richer than Daddy Warbucks (even if the five minutes of suggested risotto stirring were more like 25). Panna cotta pudding, tart with poached rhubarb and ginger syrup, is an effortless finish. Given the majesty of the food within, the kit is an absolute steal. It’s certainly put me in the mood, which is a shame. Happy Valentine’s Day, no one!” 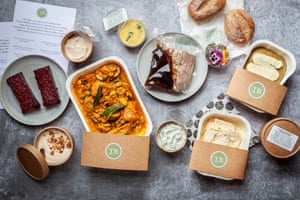 Choose from multiple three-course menus from Tommy Banks, the chef and co-owner of the Michelin-starred the Black Swan at Oldstead and Roots in York. Expect a focus on seasonal, local produce – a recent vegetarian menu included carrot terrine with goat’s cheese and pickled fennel. Menus change weekly and a five-course option is also available.
From £45 for two, tommybanks.co.uk. Deliveries nationwide, included in box price.

A taste of the Cornish sea from the chef Rick Stein. The sea bass box includes mussels with black beans, garlic and ginger, sea bass with a hot, sour and sweet sauce with rice and bok choy, and a mango fool with cardamom shortbread.
From £45 for two, rickstein.com. Deliveries nationwide, £7.95. 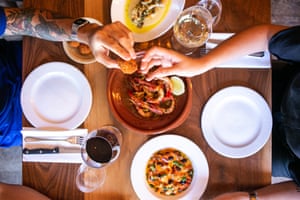 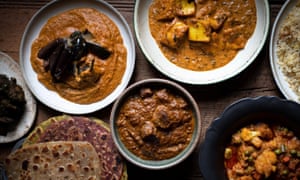 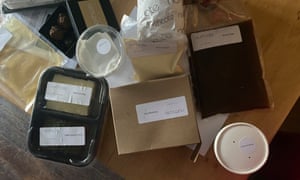 “The Northcote box arrived with instructions that went off in my heart like a plangent ballad to times past. Long before I started cooking, I had to freeze a lime concoction that it might ultimately be snow to sprinkle on chocolate, bring the bread and butter to room temperature, and soak a plank of cedar. It’s been the longest imaginable time since I ate anything off a plank. 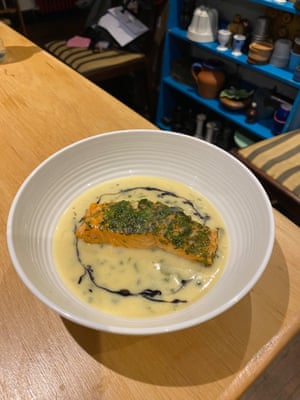 “It turned out the cedar was just for flavouring and steaming the trout in the oven, and when it came to plating it, there was a separate butter sauce to heat, and a dense black lemon syrup to dot around. Even with my staggering ineptitude, it looked gorgeous, like a laurel crown. For a fish.

“There are cuts of beef that you only ever eat in a restaurant (next course was salt-aged fillet with a marrowbone crust) but the exhilarating bit was the depth of flavour in the sauces. There are things you could but don’t do in a domestic kitchen – three-day stocks finessed with a glancing trace of mushroom, onion soups that taste of 36 separate ingredients. 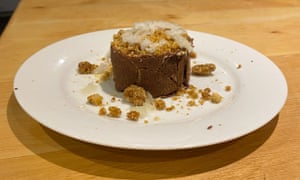 “I thought I mainly missed restaurants for the camaraderie and sense of occasion; turns out I also miss this taking of infinite pains.” 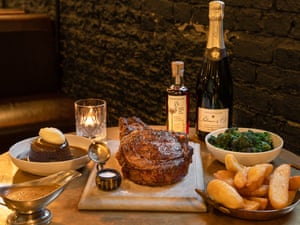 Essentially steak night in a box but you’ll have to be quick as it sells out quickly. The Valentine’s meal includes a 35-day dry-aged prime rib for two, beef dripping chips, purple sprouting broccoli and peppercorn sauce, followed by sticky toffee pudding. They even provide a QR code for a playlist.
From £85, thehawksmoor.com. Deliveries nationwide, £5 on Saturday, otherwise free. 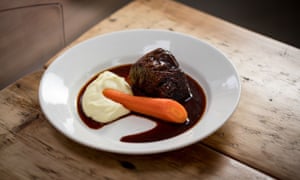 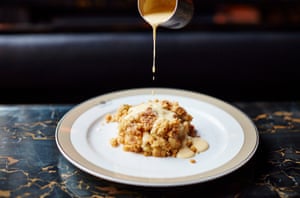 You could pick your favourite main, sides and dessert from the menus of the Wolseley, the Delaunay and Zédel, or opt for the Valentine’s Day menu (available 1 February): classic shrimp cocktail, dill and lemon baked salmon with green goddess sauce, chocolate orange cremeux, plus champagne.
Valentine’s Day box £150 for two, thewolseley.com. Deliveries nationwide, from £6.50. 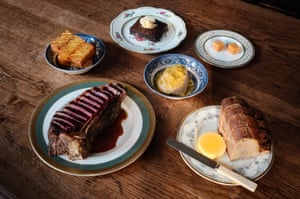