Super accounts took a beating this week following the carnage on world sharemarkets, with the return of the typical “growth” investment option for this financial year sitting at about minus 5 per cent.

That could leave fund members who are close to retirement fearing they may have to work for longer and may seek to stem losses by switching to one of their super funds’ more conservative options. 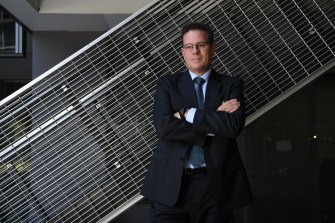 Bernie Dean, the chief executive of Industry Super Australia, says super is a long-term investment and that markets have a habit of recovering after downturns.Credit:Peter Braig

Mano Mohankumar, senior investment research manager at Chant West, said a return of minus 5 per cent would make it the third-worst financial year performance since the introduction of compulsory super in 1992.

The volatility in the markets was heightened after the US Federal Reserve lifted interest rates by 0.75 percentage point, the biggest increase since 1994, as it seeks to rein in inflation. In response, sharemarket investors took flight on recession fears.

The Australian sharemarket was almost 7 per cent lower this week.

Experts warn those eyeing retirement not to panic and not to switch to a more conservative investment option because they could end up crystallising the losses and missing out on the eventual rebound in sharemarkets.

John McIlroy, the executive director at financial planning firm Crystal Wealth Partners, said there was no need for those thinking of retiring to panic.

“We see it time and time again that markets rebound and the only question is how long it takes,” he says.

Pre-retirees have long investment time-frames – with decades in retirement – and so can afford to be invested in riskier assets to achieve the expected higher returns over the long term, McIlroy said.

In early 2020, the S&P/ASX 200 Index fell more than 35 per cent in just 22 trading days before recovering the pandemic-induced losses shortly after. “Those who switched to [their super fund’s cash option] when markets dipped in early 2020 would have crystallised their losses and missed out on the rebound, leaving them worse off in retirement,” he said.

Bernie Dean, the chief executive of Industry Super Australia, said it was natural for fund members to be concerned about the impact of inflation and interest rate on their retirement savings.

“But it’s important to remember that super is a long-term investment and that markets have a habit of recovering after downturns,” Dean said.

Reserve Bank of Australia (RBA) governor Dr Philip Lowe said annualised inflation could reach 7 per cent by the end of this year, from 5.1 per cent in the 12 months to the March 2022 quarter.

A strong jobs report from the Australian Bureau of Statistics this week has markets expecting the RBA to lift the cash rate by 0.5 percentage point early next month, after lifting the cash rate by the same amount earlier this month.

Australia’s resources heavy sharemarket could do better because of rising commodity prices, he said.

Chant West’s Mano Mohankumar said despite the recent volatility that super returns were holding up very well over the long term.

The typical growth option has produced an average annual compound return of about 7.9 per cent over the past 10 years.