How will food inflation impact your wallet?

In the first six months of the Biden presidency, rising inflation has squeezed businesses and families still reeling from the effects of the pandemic. That could spell trouble for Democrats.

As Americans return to normal life and spending habits, Republicans are sounding the alarm on rising prices, and laying blame squarely on what they see as President Biden’s spendthrift recovery agenda.

Prices increased 0.6% month over month, faster than the 0.4% jump that was anticipated by analysts surveyed by Refinitiv.

And Republicans have already set up a strategy to drive the inflation message home to voters for the 2022 midterms. Axios reported that Rep. Jim Banks (R-Ind.), who leads the Republican Study Committee, wrote a memo on inflation to his GOP colleagues: "Of course, they're trying to spin the media and explain that it has nothing to do with their big-spending policies. Which, we know, is simply false."

"That's why we need to tie inflation to the Biden economic agenda and explain to voters how inflation is Democrats' hidden tax on the Middle Class," Banks continued.

U.S. consumer prices increased 5% in May, the biggest surge since August 2008, before the financial crisis hit, the Labor Department reported Thursday. The staggering consumer price index increase comes as demand from the rebounding economy surpasses supply chain output, with food makers and manufacturers scrambling to make up for lost production time during the pandemic.

Automobile drivers have certainly noticed, too, with the price of crude jumping 46% for the year. The national average for gas is over $3.00 per gallon, according to the American Automobile Association (AAA).

"Despite gas prices being at historic lows this time last year, the average price for a gallon of gas is currently an astounding $3.10. That’s the highest it’s been since 2014, the last time Joe Biden was in the White House," House Minority Leader Kevin McCarthy wrote recently in a blog post. Some experts blame in part seasonal trends and a soaring demand as the world gets back to traveling, though others point to new regulations on oil and gas.

Meanwhile, the average price of fresh chicken at grocery stores across the country between September 2020 through May 2021 increased  5.3% to $2.77, that’s up from $2.63 in September, according to data from NielsenIQ obtained by FOX Business. 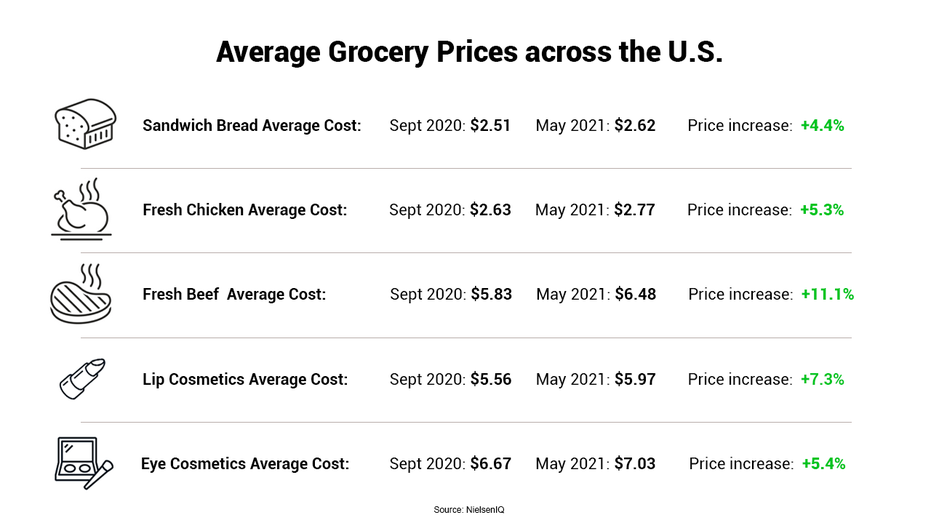 As mask-wearing mandates have eased across the country, consumers can expect to pay more for select cosmetics items. Lip cosmetics in particular saw a 7.3% increase with the average cost at $5.97 for May, up from $5.56 in September. Eye makeup went up to $7.03 from $6.67 in September, a 5.4% increase.

The White House has maintained that inflation is transitory and will self-correct. But Clinton-era Treasury Secretary Larry Summers is concerned. In a Washington Post op-ed entitled "The inflation risk is real," Summers last month warned progressives that inflation spikes "disproportionately hurt the poor," and pointed to history where inflation concerns led to GOP victories in 1968 and 1980.

"Higher minimum wages, strengthened unions, increased employee benefits and strengthened regulation are all desirable, but they, too, all push up business costs and prices," Summers also wrote.