That thud got louder on Tuesday when the Reserve Bank – on a mission to tame inflation – raised rates again.

That’s a distillation of economists’ views in response to a larger-than-expected fall in house values in July – now plummeting at their fastest pace in 40 years.

Where previously the experts had expected prices to fall consistently, but relatively gradually, for the remainder of this calendar year and next, they have pulled that timetable forward.

The falls are now expected to hit harder – bringing more trauma for some household balance sheets.

Even those homeowners without mortgages, or those with big mortgage buffers, can’t escape the negative wealth effect of lower house prices.

This is an outworking of the Reserve Bank’s determination not to draw breath on relentless and aggressive interest rates attacks. 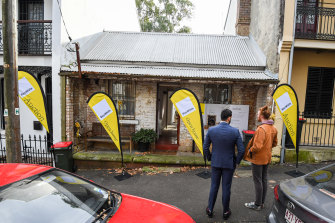 The rapid fall in house prices demonstrates that the RBA rises are hitting that mark.

Having begun tightening monetary policy too late, the RBA’s catch-up is occurring at warp speed and borrowers can do little but buckle up and brace for impact.

The velocity of the house price falls won’t be a concern for the RBA – quite the opposite – it will be a demonstration that its policy is working, at least in the housing market.

The RBA jury is not so certain about how this is flowing through to household spending.

“Employment is growing strongly, consumer spending has been resilient and an upswing in business investment is under way,” the RBA said on Tuesday while announcing the latest rate rise.

Painful as this will be to some mortgage holders, for the RBA this represents positive pain – the kind that borrowers need to endure to fix the economy’s more dangerous ailment, inflation.

With inflation breaking its own records – running at its highest pace in 21 years – its treatment needs to be painful.

In previous rising interest rate cycles or when introducing changes to macro prudential measures, the RBA was alive to the desire to manage the impact on house prices. But this time around, it is more prepared to risk housing price deflation.

The central bank is laser focused on seeing inflation peak no later than the last quarter of this financial year and at no higher than its anticipated 7.75 per cent. It also needs the community and business to avoid a mindset that inflation could become a medium or longer-term feature of the Australian economy.

Borrowers will be collateral damage.

The majority of borrowers are ahead in mortgage payments and given we are experiencing unemployment at a 50-year low, loan serviceability has been regularly called out by lenders as something of a non-issue.

There is little or no evidence to date from banks that delinquencies from home loans have grown; there are even suggestions they have fallen since the RBA began boosting interest rates in May.

There is a vintage of borrowers who came to the market last year when rates (particularly fixed interest rates) were at an historic low and property prices were peaking and who were lulled by the RBA projections that rates wouldn’t rise before 2024, who will be especially vulnerable to this round of rate rises.

For Australia’s largest lenders, the four major banks, it’s become a case of, be careful what you wish for.

The withdrawal – a slowdown in loan growth – will be more painful for earnings.

Where the RBA moves from here is clear enough from Tuesday’s statement. The round of rate rises is not over yet.

But the size and timing is now an open question.

“The size and timing of future interest rate increases will be guided by the incoming data and the Board’s assessment of the outlook for inflation and the labour market,” the RBA said on Tuesday.