United Parcel Service, Inc. (UPS) has ascended to the top of the transportation sector leadership list, ending a long period of laggard behavior. While shipping rival FedEx Corporation (FDX) has posted higher returns so far this year, UPS stock has the added distinction of breaking out above five-year resistance, predicting potent upside going forward. Conversely, FedEx stock is now trading just below tough resistance at the 2018 bull market high, raising the odds for a reversal.

Both companies can thank Amazon.com, Inc. (AMZN) and the pandemic for their improved fortunes. In April, the e-commerce giant chose to delay the buildout of an in-house delivery initiative in order to focus resources on its rising market share. The shippers rallied strongly on the news while also benefiting from higher volumes as a result of the pandemic-driven acceleration out of brick-and-mortar sales.

Wall Street has been slow to react to the improved fortunes of UPS, maintaining a "Moderate Buy" rating on the stock based upon nine "Buy," four "Hold," and a surprising four "Sell" recommendations. However, bullish sentiment could play catch-up, as evidenced by Monday's KeyBanc upgrade to "Overweight." As analyst Todd Fowler notes, "We expect a steady cadence of favorable commentary around yield, efficiency, and capital deployment initiatives from new CEO Carol Tomé, which, combined with secular trends supporting domestic package growth, should aid margins and returns." 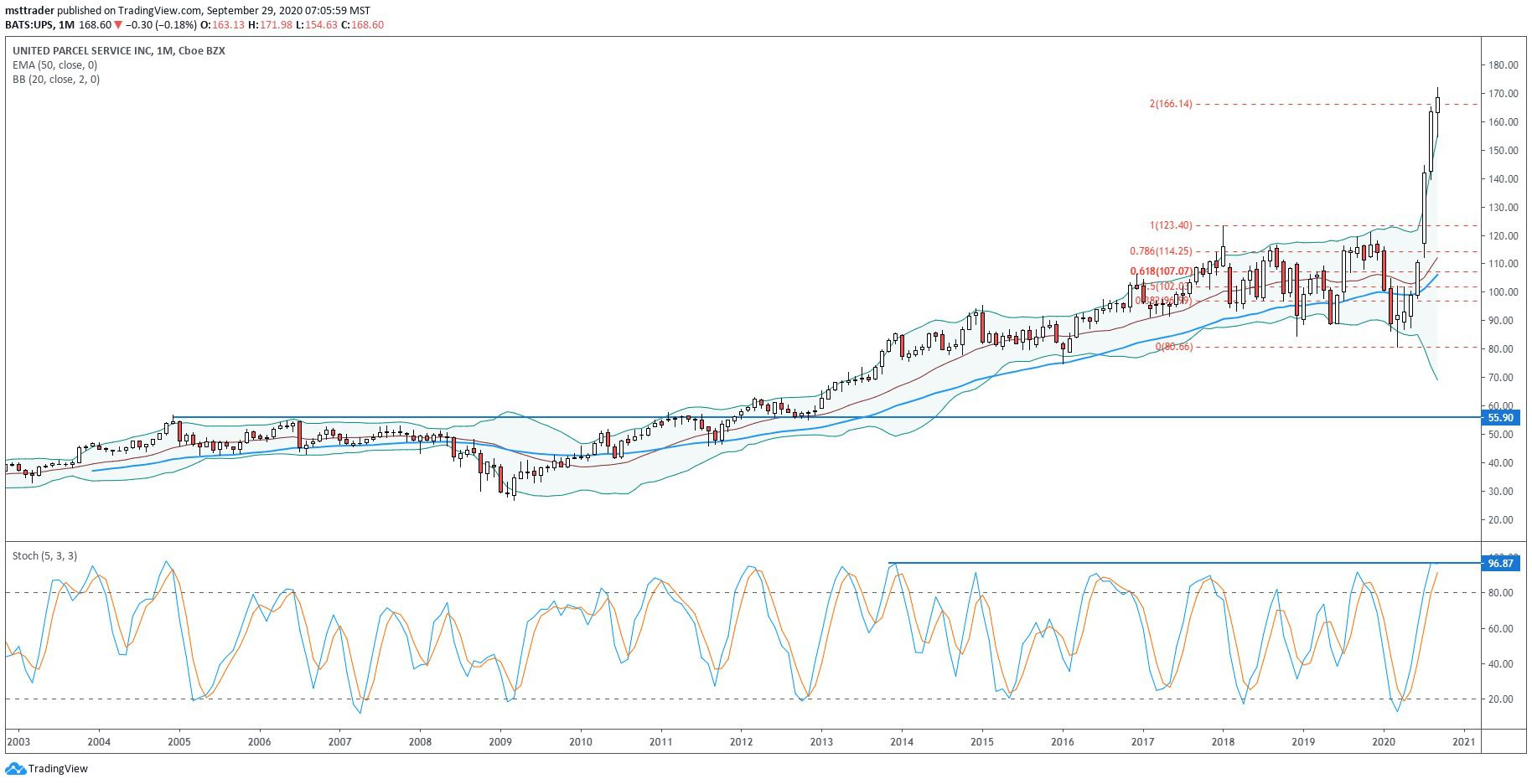 UPS completed a round trip into the 2004 high in the mid-$50s in 2011 and settled into a sideways pattern, ahead of a 2012 breakout that took nearly one year to develop upside momentum. The uptick topped out in the $90s in 2015, yielding a pullback to a two-year low, followed by a bounce that hit new highs in the second half of 2016. The rally died just above $120 in January 2018, yielding volatile mixed action that hit a four-year low in the first quarter decline.

The stock completed a basing pattern below $100 in June and took off for the heavens, gaining more than 70 points into Monday's all-time high at $171.98. It has just cleared multi-week resistance in the $160s, so a successful defense of new support could generate continued upside, perhaps topping $200 in the fourth quarter. However, the stock is extremely overbought after the out-sized returns, raising the odds for a failed breakout that fills the big gap between $125 and $135.

You can see this lopsided buying interest on the monthly stochastic oscillator, which has now reached the most extreme overbought technical reading since the end of 2013. In addition, the rally has just crossed resistance at the 2.000 Fibonacci rally extension, while the September monthly price bar is set to close 100% outside the top band. Taken together, new long positions could easily get trapped in a reversal.

A pullback that fills the July breakaway gap could offer a low-risk buying opportunity because it also aligns with the 200-day exponential moving average (EMA). However, it's hard to visualize 50-point downside after the high-volume uptick, so potential investors may have to sit through a wait-and-see period heading into the Oct. 22 earnings report. This is especially true with volatility ramping up ahead of the presidential election and a cold autumn that could super-charge COVID positives.

A breakaway gap is a term used in technical analysis that identifies a strong price movement through support or resistance. A gap is the difference between the open price and prior close price, where no trading activity takes place. The price breaks away from the support or resistance via a gap, as opposed to an intraday breakout. Breakaway gaps are often seen early in a trend.

UPS has posted dramatic 2020 returns, but the reward-to-risk profile for new positions is no longer favorable without a pullback or multi-week consolidation.