US economy sees solid job growth in May as payrolls jump by 390,000

President Joe Biden delivers remarks on the May jobs report

President Joe Biden delivers remarks on the May jobs report.

The U.S. economy continued to see healthy job growth in May, indicating the labor market is still strong despite growing fears of a recession amid sky-high inflation and an increasingly aggressive Federal Reserve.

Employers added 390,000 jobs in May, the Labor Department said in its monthly payroll report released Friday, beating the 328,000 jobs forecast by Refinitiv economists. The unemployment rate, meanwhile, held steady at 3.6%, the lowest level since February 2020.

Job gains were broad-based, with the biggest increases in the pandemic-battered leisure and hospitality industry (84,000), professional and business services (75,000) and transportation and warehousing (47,000). Nearly every industry gained positions last month, with one notable exception: Retail, which shed nearly 61,000 jobs.

"This does not look like a labor market about to tip into recession," said Daniel Zhao, senior economist at jobs review website Glassdoor. "Job gains were healthier than expected and the labor force participation rate ticked up. Despite concerns about a slowdown and even a recession, the labor market’s fundamentals look healthy."

Businesses are eager to onboard new employees and are raising wages in order to attract workers as they confront a labor shortage. There were roughly 11.4 million open jobs at the end of April – near a record high – while the number of Americans quitting their job is also well-above pre-pandemic levels.

But the strong labor market is in part fueling record-high inflation, as millions of workers are seeing the largest pay gains in years – the result of companies competing with one another for a limited number of employees. Earnings rose 5.2% in May from the previous year, much higher than the pre-pandemic average of 3%. There are signs that growth could be moderating though, with earnings climbing just 0.3% on a monthly basis, slower than Refinitiv expected. 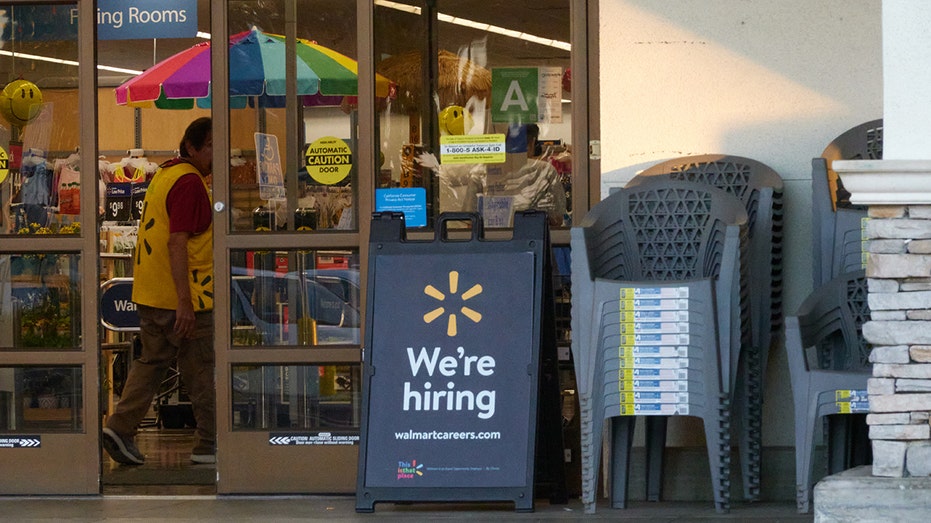 A “We’re Hiring” sign outside a Walmart store in Torrance, California, US, on Sunday, May 15, 2022.  (Photographer: Bing Guan/Bloomberg via Getty Images / Getty Images)

With wages rising across the economy, many companies have reported passing on the cost to customers. Americans across the country are paying more for everyday goods including food, gasoline, cars and health care, which has eroded much of the pay gains that workers have seen. The rising prices have been bad news for President Biden, who has seen his approval rating plunge as inflation climbs higher.

Inflation has also forced the Federal Reserve to hike interest rates at the fastest pace in two decades. Central bank policymakers lifted the short-term interest rate by 50-basis points in May and signaled that similarly sized hikes are on the table at forthcoming meetings in June and July.

Stocks in this Article

The job growth in May is likely high enough to keep the Fed on track with its aggressive rate hike plan. Stocks fell after the report, reflecting fears of higher interest rates.

"The strong May figures will only encourage the Federal Reserve to stick to its course of more aggressive monetary tightening, as inflation remains near a 40-year high," said Andrew Viteritti, a senior member of the forecasting team at the Economist Intelligence Unit.

This is a developing story. Please check back for updates.