The challenges of biblical bush fires, a pandemic and a growing trade battle with China did not hurt the fortunes of the richest 200 Australians, who grew their wealth by $72 billion to $424 billion in 2020.

And as the dust settled on the pecking order of the Australian Financial Review's Rich List 2020, it revealed some familiar names, with red dirt billionaires Gina Rinehart and Andrew 'Twiggy' Forrest claiming top spot and second, respectively, as China's demand for iron ore continued to beat everyone's expectations.

Mrs Rinehart is back on top of the rich list for the first time since 2015, with her wealth estimated at $28.9 billion as the Chinese paid top dollar for the millions of tonnes of iron ore shipped from her privately owned mines. 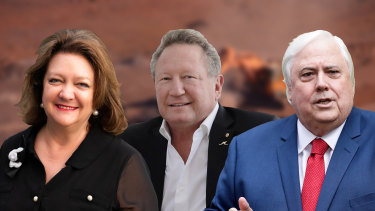 Likewise, Mr Forrest – the new owner of iconic Australian fashion label RM Williams – tipped the scales at $23 billion. He topped the list in 2008 when his company Fortescue had yet to make its first shipment of iron ore. Mrs Rinehart and Mr Forrest more than doubled their wealth in a year. So did Clive Palmer, who was worth more than $9 billion.

Card-board king Anthony Pratt lost his top place from last year to sit third on the list with his wealth estimated at $19.7 billion. It means Australia's most prominent tech billionaires, Mike Cannon-Brookes and Scott Farquhar, are within striking distance of the man who successfully bet on Donald Trump's election win in 2016.

While the wealth of our tech billionaires made astounding gains during the pandemic shutdown, the global transition to online services could not quite match the economic pull of China.

The Atlassian co-founders are worth $16.9 billion and $16.7 billion, respectively, and rank fifth and sixth on the list but unlike our iron ore billionaires they did not manage to double their wealth last year.

Afterpay’s freshly minted billionaires Anthony Eisen and Nick Molnar went one better though. The founders of the buy now pay later firm more than tripled their wealth on the back of a dizzying share price which put their wealth at $1.86 billion each.