Wealth giant AMP's chief executive Alex Wade has called on the government and regulators to work with the superannuation industry to redesign the financial advice model as funds prepare for the launch of the government's early access scheme.

The corporate watchdog this week relaxed regulations to fast-track the process for financial advisers to provide assistance to Australians deciding whether to access their super early as part of the federal government's emergency scheme that comes into effect on Monday. The scheme allows people who have lost work as a result of the pandemic to access up to $20,000 from their retirement savings.

"We see our role as helping clients make the best decision for them. Accessing super early will have an impact on retirement, so it’s important everyone carefully considers all options before making the decision," Mr Wade said.

The Australian Securities and Investments Commission has capped the fees for the early access advice at $300 and relaxed the red tape around mandatory filing of statements to speed up the process. 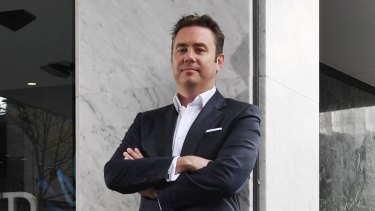 AMP Australia CEO Alex Wade has called for a rethink on how to provide “affordable and accessible” financial advice. Credit:Nick Moir

Mr Wade praised the regulatory changes but said more needed to be done to ensure appropriate financial advice was widely available. "As we emerge from COVID-19, industry, government and regulators should come together to design an advice model for the future, which ensures affordable and accessible advice for all Australians," he said. "We’d be ready to discuss and work with the rest of industry on initiatives such as a helpline or other financial literacy services.”

Director of advocacy group SuperConsumers' Xavier O'Halloran said there were conflicts of interest when super funds provided advice to members and called on the government to introduce a model similar to that in the United Kingdom, where the government partly funds a free and independent financial counselling hotline.

"Super funds would not want people taking money out early which may mean their members are not given the best advice. I see a strong need for an independent advice organisation to play that role," Mr O'Halloran said.

The comments come as debate continues over whether Australians have adequate information about the risks involved in accessing their super before retirement age. SuperRatings executive director Kirby Rappell said "knee-jerk changes to your portfolio" can lock in losses and punch holes in retirement savings.

Phil Kewin, company secretary of the Association of Financial Advisers, said super funds were receiving a higher number of calls than during the global financial crisis. Mr Kewin said $300 would not cover advice beyond initial discussions and called on the government to make financial advice tax-deductible.

"It's a critical time. Big financial decisions are being made in a heightened state of stress," Mr Kewin said. "Those who have advisers are feeling more comfortable, they’re being reassured. The more people who can get that reassurance the better."

Super funds can provide "intra-fund advice" to members where the cost of a single, general advice session is shared by all members of the fund. If more detailed guidance is required, funds charge a variable fee. Not-for-profit fund AustralianSuper, for example, charges members about $2,500 a full statement of advice.