Westpac is pressuring corporate borrowers to cut carbon emissions by setting new targets for clients in electricity generation, cement manufacturing and oil and gas, though it could still fund new fossil fuel projects if pushed by government.

Updating the market on Wednesday, the banking giant also said it would look at cutting costs by merging branches from its different brands that operated in similar locations. Such a move could ultimately result in about 100 branches closing. 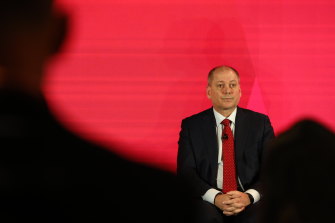 Amid pressure from investors and regulators over climate risks, Westpac has released detailed targets for the carbon emissions released by its big corporate customers – known as “financed emissions”.

Under the policy, customers in these sectors will be required to develop credible plans for cutting their emissions.

Chief executive of Westpac Institutional Bank  Anthony Miller said the bank was keen to work with clients to cut their emissions. This could include changes to their business operations, alongside the use of carbon offsets.

Under the policy, Westpac will aim to slash the emissions intensity of its electricity lending portfolio by more than 50 per cent by 2030, compared with 2021 levels. King said it was vital that Australia ultimately moved its electricity generation to renewable energy.

In oil and gas, Westpac wants to cut its financed emissions by 23 per cent by 2030, compared with 2021. However, the bank will continue to lend to provide corporate loans (as opposed to finance for specific projects) to existing oil and gas clients if they have a “credible transition plan” by 2025.

Westpac also said it would consider financing new oil and gas projects if regulators said such projects were needed for energy security.

Dr Stuart Palmer, head of ethics research at Australian Ethical, which holds Westpac shares, said the bank’s policy was based on credible climate scenarios, but continuing with corporate lending to oil and gas clients until 2025 was a big gap.

“That’s too long. What the requirements will be for those plans raises a whole lot of issues,” Palmer said.

Julien Vincent, executive director of climate action group Market Forces, said it was hypocritical for the bank to claim a commitment to net zero targets while still allowing oil and gas lending.

“Westpac is still giving itself scope to lend to companies that want to lock in decades more in oil and gas production,” Vincent said.

Westpac also flagged plans to cut costs across its network of almost 800 branches, as it tries to hit aggressive cost-cutting targets, and more customers do their banking online.

King said the bank would look at more branch “co-locations” – where a Westpac branch and a branch from one of its regional brands, such as St George, share the same retail space.

King said Westpac already had 21 co-located branches, and it was considering changes that would result in 100 more over the next 18 months. That would lead to the closure of 100 current branches.

King said the bank would look to redeploy affected staff. He argued “co-located” branches could stay open more, be more efficient, and allow the bank to remain in regional areas.

“It’s quite a big opportunity to stay in the locations and improve the service,” he said.

King said Westpac’s total number of branches would continue falling over time, pointing to figures showing the bank processed about 30 times more digital transactions in the last half, compared with over-the-counter transactions.