New York (CNN Business)Covid-19 no longer seems to be the biggest concern on Wall Street as more people are getting vaccinated. Now, the focus is squarely on the bond market and inflation.

Investors are starting to worry that the economy may heat up too much, and that inflation will make an unwelcome return.
That has led to some notable volatility in the bond market lately. The US 10-year Treasury yield is now at around 1.44% after briefly spiking to 1.61% on Thursday, the highest level since before the pandemic sent rates plunging last spring. (Stocks surged Monday, though, as bond yields pulled back a bit from last week’s levels.)

While the yield for the 10-year Treasury is still historically low, investors are worried about the magnitude of the spike.
Yields were at about 1% this time a year ago, and they plunged all the way to just above 0.3% in March, shortly after the Federal Reserve cut interest rates in an emergency meeting at the beginning of the Covid-19 crisis.

It’s reminding investors of what came to be known as the taper tantrum of 2013, when bond yields surged after the Federal Reserve announced plans to pull back -— or taper — on bond purchases. A repeat of that scenario could lead to a further pullback in stocks, particularly the Big Tech FAANGs leading the Nasdaq, as they’ve benefited the most from low interest rates.
“The move in rates has been so swift, and that is what has caught the market by surprise,” said David Norris, head of US Credit at TwentyFour Asset Management.

Inflation may not be a problem for several years

But are traders overreacting to concerns about inflation on the horizon being a potential problem? Fed chair Jerome Powell and the rest of the Fed are still not too concerned, mainly because wage growth remains sluggish and the labor market is far from being fully recovered.
“Powell seems to be advising investors to not worry,” Norris said. “He is more concerned about the unemployment rate and job destruction from the pandemic.”
Inflation is typically a bigger bugaboo when people have more money in their paychecks and are willing to pay higher prices for goods and services. Recent increases in prices for commodities, like oil, may not be sufficient enough to cause inflation scares unless companies are comfortable passing on rising costs to consumers in the form of higher prices.
“People are anticipating inflation. Platinum prices are moving higher. So are other commodities like lithium,” said Will Rhind, CEO of GraniteShares, an exchange-traded fund investing firm. The company’s commodity ETF is up 9% already this year. 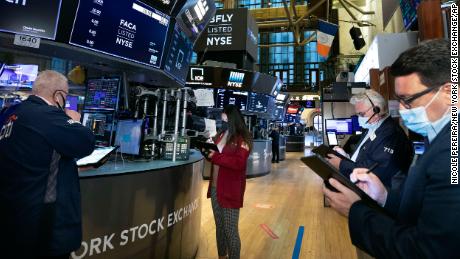 The Fed has also given no indication that it’s ready to take its foot off the gas pedal and cut back on stimulus just yet either The Fed will likely tolerate more inflation as long as it is accompanied by an economic recovery.
“Inflation is sign of a rebounding economy. That’s not necessarily a bad thing,” said Brian Walsh Jr., financial adviser at Walsh & Nicholson Financial Group. “Investors just want to hear from Powell that everything is going to be okay and that the Fed will support growth with more stimulus and liquidity.”
Walsh thinks that inflation is more of a 2022 and beyond problem, not something to be overly worried about just yet. And according to the Fed’s own projections, no interest rate hikes are likely until late 2023 or early 2024.
“There will be no massive inflation until the recovery is firmly in place,” Walsh said.

Lots of cash on the sidelines to keep the rally going

If the Fed were to miss the boat on inflation, it may need to reverse course and quickly raise interest rates. But even that might not hurt the economy too much, some argue. That’s because many consumers have been pulling back on spending and squirreling away cash as a result of the pandemic.
According to the most recent government figures, the savings rate in January was 20.5% — well above historical averages.
“There is a lot of dry powder ready to be deployed in this economy and market,” said GraniteShares’ Rhind.

And as TwentyFour Asset Management’s Norris points out, there are some other reassuring signs that show inflation is not that big of a threat right now. The US dollar, which tends to weaken during times of inflation, is actually up more than 1% versus a basket of other key global currencies so far this year.
“Ultimately, inflation could be a concern,” Norris said. “But all the dynamics the Fed looks at shows that inflation is not prevalent at the moment. The market is getting ahead of itself. The Fed has inflation under control at this point in time.”
Source: Read Full Article