U.S. oil prices plunged Friday after China reported its gross domestic product shrank for the first time since recordkeeping began in 1992 as the economy was shut down to slow the spread of COVID-19.

West Texas Intermediate crude oil for May delivery tumbled by as much as 9.26 percent to $18.03 a barrel, its lowest since October 2001, before trimming its losses. The contract, which expires on Wednesday, was trading at $18.59.

“Lingering weakness in domestic demand alongside an extended period of global weakness will probably prevent GDP from returning to its pre-virus path until at least the middle of next year even amidst the ramp-up in policy stimulus,” wrote Julian Evans-Pritchard, a Singapore-based senior China economist at the research firm Capital Economics. 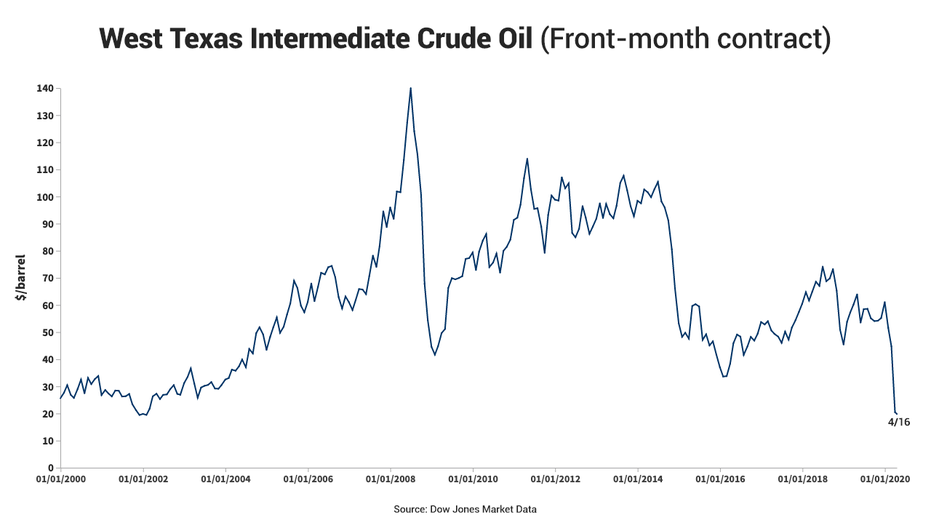 China’s first-quarter gross domestic product fell 6.8 percent year-over-year in the January-to-March period, according to the National Bureau of Statistics, larger than the 6 percent drop that economists surveyed by Reuters were expecting.

The sharp economic contraction is a preview of things to come for the rest of the developed world, including the United States, as the COVID-19 pandemic originated in China, impacting its economy first.

Slower economic growth means there will be less demand for oil and its byproducts, including gasoline and jet fuel. In a report out Thursday, OPEC said global demand will fall by 6.9 million barrels per day amid the COVID-19 pandemic. In a separate report out Wednesday, the U.S. Energy Information Administration said 9.3 million barrels per day of demand has been zapped.

The weaker demand exacerbates a supply glut that was made worse when a price war broke out between Saudi Arabia and Russia on March 9.

In virtual talks last weekend, the world’s largest oil producers reached an agreement to trim global production by about 20 million barrels per day in May and June.