The chair and senior management of troubled energy super fund EISS will be hauled in front of a parliamentary committee to answer questions about its questionable sponsorship deals and spending on staff parties and overseas junkets.

EISS chief executive Alex Hutchison suddenly resigned on Thursday evening, claiming the “timing is right for me and it’s right for the fund.”

The Age and Sydney Morning Herald revealed on Wednesday the super fund had spent more than $75,000 sending one senior manager to the US for training and held lavish Christmas parties at Sydney’s Museum of Contemporary Art. 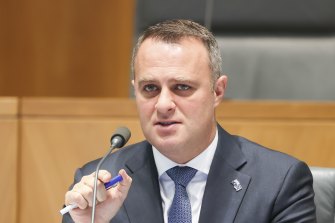 Liberal MP Tim Wilson said on Friday he would call Mr Hutchison, EISS chair Warren Mundy and other senior managers before the economics committee to grill the fund about its internal processes for approving sponsorship deals and managing conflicts of interest.

“It’s now clear there is a need to know who knew what and when,” Mr Wilson told The Age and Sydney Morning Herald. “Firstly, what were they doing? What else are they doing? Quite serious allegations have been made. And secondly, what’s been done about it? What’s going to happen? When are they going to stop abusing members’ money?”

EISS manages around $6 billion for around 20,000 members working largely in the energy industry and was named among the country’s worst performing super funds by APRA last week. The fund has defended its corporate governance, saying all sponsorship deals are subject to rigorous scrutiny and Dr Mundy on Thursday told staff in a leaked internal email he made “no apology” for investing in training.

“EISS Super is a fund focused on our members,” Dr Mundy said in the email. “We have rigorous policies and processes in place to ensure the fund is run in the best interests of members and any suggestion that this has not occurred is simply untrue.”

Earlier in the day during a committee hearing, Mr Wilson accused EISS of behaviour verging on corruption and queried the Australian Prudential Regulation Authority (APRA), which regulates the $3.3 trillion industry, about why it had not acted on problems at the fund.

“We have EISS indulging in frankly, what verges on corruption, as far as I’m concerned, this deeply questionable behaviour. My bigger question to [APRA chair Wayne] Mr Byres is where were you when this was being done previously? How did this meet the sole purpose test?” Mr Wilson said.

“All this says to me, firstly, is it puts to bed the lie that was perpetuated since the Hayne royal commission, that some of these super funds are all valorous and doing things in the best interests of their members. Most of them are an indulgence of various funds seeking to use members’ money to suit their personal benefit in different ways and this is a classic example of it, and it’s scandalous.”

Mr Byres said the regulator was now applying a “stronger lens” of the best financial interest duty and hinted EISS could face enforcement action. “We are looking at the facts of that, so I’m wary of opining on things that there may be subsequent action on because we need to make.”

Mr Byres said earlier there were a “raft of things” that super funds “do that go under the banner of marketing”. “I think some might be more effective than others, and the whole purpose of the new legislation is to give us more authority to clamp down on those that are questionable,” Mr Byres said.

Dr Mundy sent EISS staff an email on Friday morning saying it was “with great sadness” that Mr Hutchison had resigned, outlining his achievements and support of the proposed merger with TWUSUPER.

“It has been a pleasure working with Alex during my time at the fund which I’m sure is a sentiment shared by many of you,” Dr Mundy wrote, in the letter obtained by this masthead.

“Alex has requested that his resignation be effective immediately, which I respect and have agreed to…I want to be very clear that this was Alex’s decision. I can assure you, as was the case during his tenure with EISS Super, that in making this decision Alex has put the interest of members, staff and the fund first.”

The EISS revelations comes as the superannuation industry faces new regulations enforced by the federal government that aim to stamp out under-performing funds and expenditure by funds that does not financially benefit members.

EISS and Mr Hutchison did not respond to immediate requests for comment.