The pandemic is sending global debt ever higher, and stability generations away

As the second wave of the pandemic crashes through the US and Europe, it is apparent that even with vaccines on the horizon, the world is going to be mired deeper in deficits and debt than anyone could have foreseen and for longer than could ever have been anticipated.

Even in economies where the virus seems to have been contained, like Australia's, it could take a generation to restore debt levels to their pre-pandemic levels relative to their GDP.

By 2024, the federal government’s net debt could reach $1.4 trillion. In Victoria, the state government’s budget forecasts show its net debt blowing out to $155 billion over the next three years, or nearly 30 per cent of the state’s economic output. 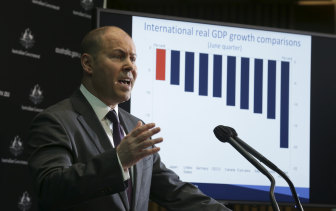 While – as Victorian Treasurer Tim Pallas conceded – it will take decades to return debt levels to pre-pandemic levels, Victoria and Australia have so far at least dodged a second wave of the pandemic and thus ought to experience a quicker economic rebound than those economies experiencing soaring infection and death rates.

It is economic growth that will ultimately help stabilise debt-to-GDP levels and provide flexibility for governments to respond to future economic shocks.

Around the world, the second wave of the pandemic is pushing debt levels even higher and the prospect of a return to growth even further away, while continuing to shrink the global economy. The world will enter 2021 with an economy at least 3 per cent smaller than it was at the start of this year.

Global debt has increased $US15 trillion ($20.4 trillion) already this year and is now likely to exceed $US277 trillion, according to an International Institute of Finance report issued last week. It estimates that by 2030 total debt could reach $US360 trillion.

The World Economic Forum expects the ratio of public debt to global GDP in developed economies to reach 140 per cent. And that’s likely to prove conservative.

The US ran a $US3.1 trillion federal budget deficit in the year to September. US national debt is now above $US27 trillion and its debt-to-GDP ratio is almost 130 per cent. Australia’s is 45 per cent.

If the Biden administration were able to effect its proposed new pandemic response package, another $US2.4 trillion would be added to the US deficits and debt. Even without it, the Congressional Budget Office says US federal debt could reach 195 per cent of GDP by 2050 – nearly 50 per cent higher than its pre-pandemic projections.

The world, and developing economies in particular, have been caught in a debt trap.

In Europe, where the starting point pre-pandemic was a debt-to-GDP ratio for the eurozone of 87 per cent, it will end this year above 100 per cent and continue to climb. In southern Europe – Italy, Spain and Greece – the starting point was higher and the impact of the pandemic greater.

If governments maintained their current accommodative fiscal policies, it said, nominal growth would probably have to jump to 14.1 per cent of GDP from 2021 to 2025 to return debt levels to their pre-crisis level. Germany would need nominal annual GDP growth of 18 per cent to get back to 2019 levels.

Those projections pre-suppose the current benign interest rate environment persists, which is likely.

Never has the cost of debt been so cheap. In the US, 10-year bond yields are only 0.88 per cent and 30-year yields 1.62 per cent. In Germany, 10-year yields are negative – minus 0.57 per cent – and investors are paying 0.16 per cent for the privilege of owning 30-year bonds. About $US17 trillion of the bond issued globally now have negative yields. 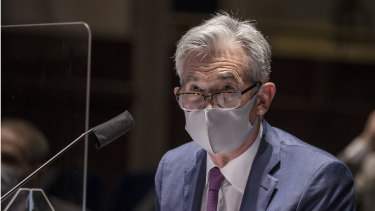 Never has the cost of debt been so cheap: Fed chairman Jerome Powell is combating the pandemic recession with record low interest rates, and so are his peers in other countries.Credit:Getty

Australian 10-year bonds yield 0.92 per cent and 15-year bonds (we don’t have a 30-year bond, yet) return 1.26 per cent. That makes the cost of servicing the debt more affordable than it has ever been – and the appeal of borrowing big to respond to the pandemic irresistible.

What if interest rates were, however, to rise at some point in the next few years?

ING’s analysis of the eurozone provides some broader insights. A 200 basis point (two percentage point) increase in bond yields, the bank said, would push the date at which the average debt ratio in the Eurozone might return to normal out to 2040 at the earliest, and countries that entered the pandemic with high debt levels could face real difficulties in reducing their debt burdens at all.

Whether it’s a future increase in interest costs or some new economic and financial threat, what that tends to underscore is that near-unprecedented debt levels by historical standards are likely to be a semi-permanent feature of the global economic landscape.

They will force central banks to continue to keep a lid on rates at ultra-low levels to avoid debt-driven financial and economic crises, and will inevitably constrain government spending and hurt standards of living in the future.

The world, and developing economies in particular, have been caught in a debt trap as the pandemic has added to the legacy of the 2008 financial crisis just as the GFC-related debts had stabilised.

It took a decade or so for the world to recover from the GFC. From a much weaker starting point – thanks to the GFC and the governments and central banks’ responses to that earlier crisis – it is going to take much longer to stabilise pandemic-rocked finances and create more stable platforms for growth in the future.

Distribution of the COVID-19 vaccines next year might allow governments to stop the ongoing damage done to economic activity by pandemic-inspired lockdowns and community concerns, and wind back the massive fiscal responses enacted to try to limit the economic pain for businesses and households.

It won’t, however, do anything to address the destabilising and restricting – and still growing – mountains of debt that the pandemic will leave behind.