New York Gov. Andrew Cuomo (D) has struck a deal with state lawmakers to enact a budget that cuts billions of dollars a year from the state’s Medicaid system and other social programs, and punishes his political enemies in the progressive Working Families Party.

Cuomo, whose daily press conferences about the COVID-19 pandemic have turned him into a national media darling, had endured some pushback in recent days for his plan to take $2.5 billion a year out of the Medicaid program. As they were initially structured, the cuts would have made the state ineligible for $6.7 billion in emergency federal assistance for the state’s Medicaid program for the duration of the pandemic, since the money requires states to preserve existing program standards and eligibility guidelines.

At the very end of Cuomo’s press conference on Thursday, though, Cuomo’s budget director, Robert Mujica, announced that they had found a solution: Putting a delay on the cuts until after the pandemic crisis passes so the state can get its share of federal money and slash the program later.

A state panel’s recommended Medicaid reforms, including major cuts, “are part of the budget and will be enacted,” Mujica said. “We have the ability to delay them in the budget, so the effective dates can be changed.”

Cuomo’s budget cuts stem at least in part from the revenue that the state expects to lose due during the pandemic-spurred economic slowdown. Mujica projects a revenue decline of between $9 billion and $15 billion this coming fiscal year due to COVID-19-related economic fallout.

The plan for Medicaid cuts includes $400 million in reduced payments to hospitals, tighter eligibility for certain long-term care benefits and a massive shift in costs to the state’s county governments, the financial strength of which varies greatly.

The new budget will also maintain current levels of state education funding, which activists consider a de facto cut since the costs of schooling rise every year. For example, the impoverished Rochester school district has already announced that it plans to eliminate 236 jobs in order to fund the coming school year.

Leaders of progressive organizations that advocate for the state’s working-class and low-income residents were furious with Cuomo, arguing that it demonstrated the emptiness of the leadership he has sought to project since the onset of the coronavirus pandemic.

“It’s a disaster,” said Jess Wisneski, co-executive director of Citizen Action of New York, a progressive community activism group. “He just doubled down on the disinvestment in our communities at a time when, in the past month, there was an opportunity to pivot to make the government work for people who were already in crisis, and now it’s crisis on top of crisis. He blew it.”

Sochie Nnaemeka, director of the New York Working Families Party, which functions as a progressive faction within the broader Democratic tent, warned out-of-staters against mistaking Cuomo’s apparent “managerial competence” for a commitment to policies that will help state residents weather the crisis. “New Yorkers know full well there’s a version of our governor in the daytime and a version that directly affects our well-being, that directly affects our ability to make it out of this crisis … and that is the governor we have known for many, many years.”

Progressives’ disappointment, however, is not limited to a governor with whom they consistently clash. The Democratic leaders in the legislature ― Senate Majority Leader Andrea Stewart-Cousins and Assembly Speaker Carl Heastie ― not only agreed to the cuts, but they also granted the governor emergency powers to adjust the budget as he saw fit in the middle of the year.

The legislature would have a narrow window to challenge any budgetary changes the governor made unilaterally, but the onus would be on them to act.

The budget legislation, which also rolls back some of the 2019 reforms restricting judges’ ability to impose cash bail on New Yorkers awaiting trial, passed in the state Senate on Thursday afternoon. The bill is expected to pass the Assembly easily before it heads to Cuomo’s desk to become law.

In the state Senate, five progressive Democrats voted against the legislation ― four of whom were elected for the first time in September 2018 with the help of the Working Families Party and its allies.

“The new crop of progressive lawmakers is really doing great,” said Michael Kink, executive director of the Strong Economy for All coalition, which includes Citizen Action and many of the same labor and community groups that fund the WFP. “What we need are more like them.”

But the new budget erects barriers to the growth of the progressive movement in the state by making it harder for the WFP to qualify for a ballot line.

New York has a system of fusion voting that allows candidates for state office to run as the nominees of multiple political parties. Generally speaking, the process aims to give New Yorkers a chance to give voice to the diversity within the two main parties. For example, every election, the WFP can point to the number of state voters who voted for Democratic candidates on the WFP ballot line ― rather than the standard Democratic one ― as evidence of progressive strength within the party.

But Cuomo, who fought off a primary challenge backed by the WFP in 2018, has made it a mission to weaken the WFP﻿. He tasked a public commission to recommend changes that would raise the threshold for third parties to qualify for a ballot line, but the state Supreme Court stopped the implementation of the rule changes in mid-March on the grounds that enacting them through a commission violated the state’s constitution.

Instead, Cuomo put the higher thresholds into the budget with the apparent blessing of Democratic leaders in the legislature. The WFP, which received 114,000 votes in the 2018 gubernatorial election, will now have to receive 130,000 votes or 2% of the total vote, whichever is higher, in both the presidential and the gubernatorial elections. (The only third party that crossed that threshold in 2018 was the Conservative Party, a ballot line used by conservative Republicans.)

The WFP is exploring opportunities to further challenge the change in court, according to Nnaemeka. Barring that, it plans to improve its registration and turnout efforts in the 2022 election in order to meet the new threshold.

HuffPost requested responses to the progressive criticisms on Thursday afternoon from spokespeople for Cuomo, Stewart-Cousins and Heastie, and has not received replies.

Not all of the policies in Cuomo’s budget bill anger progressives. He has included a regulation capping individual out-of-pocket spending on insulin at $100 per 30-day supply. 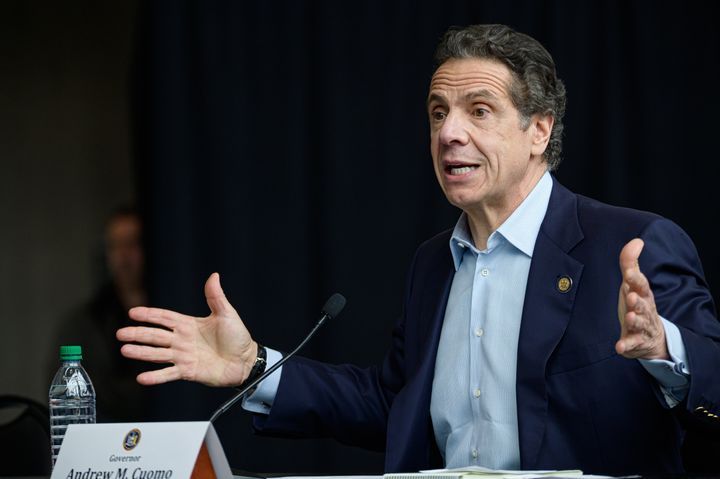 But progressives are disappointed in Cuomo for standing by his refusal to raise taxes on the state’s wealthiest residents during a time of crisis.

In the aftermath of the 2008 financial crisis, then-New York Gov. David Paterson (D) raised taxes on higher earners to help close a budget shortfall. Cuomo, who inherited the tax when he took office in 2011, worked with the legislature to partially undo it.

Cuomo has argued that such a tax increase would hamper economic development and could cause wealthy people to leave the state, since it already has relatively high income taxes.

Left-leaning advocates like Kink consider Cuomo’s multibillion-dollar spending on incentives for big business a much more questionable choice for the state’s budget and economy.

“The super wealthy still have a ton of money, and Cuomo is acting as if they’ve been hurt as much as a laid-off restaurant worker or an Amazon worker trying to dodge the coronavirus in a warehouse,” Kink said. “He is just not connected to the economic reality the way that he is connected to the day-to-day numbers on the coronavirus.”