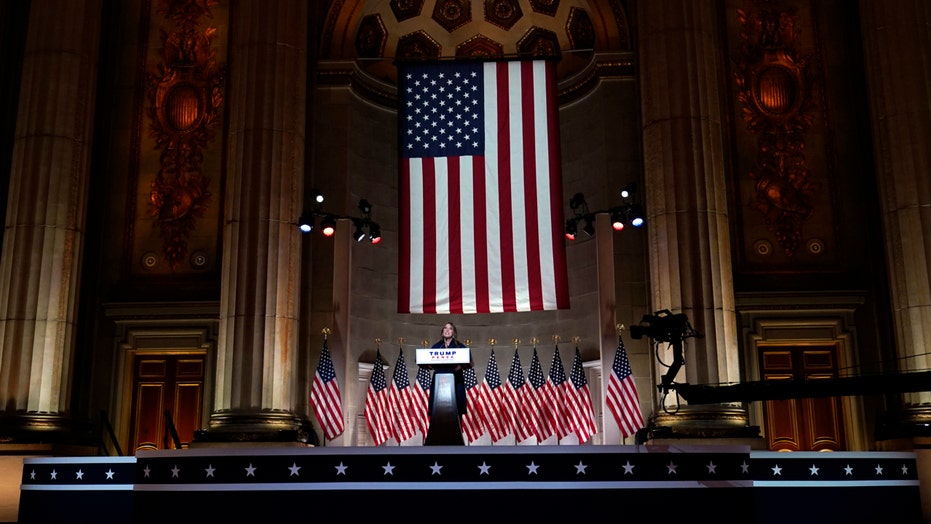 What to expect from second night of GOP convention

Mary Ann Mendoza, an Angel mom who was slated to speak during the second night of the Republican National Convention on Tuesday, was abruptly pulled from the program hours after she retweeted an anti-Semitic conspiracy theory.

“We have removed the scheduled video from the convention lineup and it will no longer run this week," Trump campaign spokesman Tim Murtaugh said in a statement to Fox News. He did not provide a reason for her removal.

Mendoza, who was scheduled to talk about the death of her police officer son in 2014 in a collision with a drunk driver who was in the U.S. illegally, came under fire earlier in the day when the Daily Beast surfaced a tweet from her in which she urged her followers to investigate a supposed Jewish plot to take over the American government.

WHAT TO WATCH FOR TUESDAY AT THE RNC: LAW AND ORDER, ANGEL MOM

“Do yourself a favor and read this thread,” Mendoza, who is a member of the Trump campaign’s advisory board, tweeted Tuesday morning, linking to a thread from a QAnon conspiracy theorist.

The thread was filled with dozens of anti-Semitic tropes and includes a link to "The Protocols of the Elders of Zion," a notorious fabrication published in Russia in 1903 that was frequently used in propaganda in Nazi Germany, claiming that it was legitimate.

Mendoza later deleted the tweet and said that she had shared it to her 40,000 followers without "reading every post within the thread."

"My apologies for not paying attention to the intent of the whole message," she said. "That does not reflect my feelings or personal thoughts whatsoever."

Former Vice President Joe Biden's campaign slammed the Trump campaign in the wake of the controversy.

"Time after time, Donald Trump has warmly embraced fringe movements, even as they incite hatred and further divide our country, including his shameful endorsement of a Congressional candidate who has spread unhinged and dangerous conspiracy theories," said Aaron Keyak, Biden's Jewish engagement director. "He even has refused to denounce the QAnon movement."

Keyak also said, "We offer comfort to any parent who ever has had to go through their loss of a child, especially under such circumstances. She has our full condolences and prayers."

Mendoza was selected to speak at the convention about immigration.