As Universities Warned Students Of Virus, Liberty Kept Its Students In The Dark

The Centers for Disease Control and Prevention first released guidance advising colleges and universities on how to handle the coronavirus outbreak on March 3. You wouldn’t know that if you were a student or faculty member at Liberty University, though.

Liberty University, a private evangelical school in Lynchburg, Virginia, has received an onslaught of criticism since late March after its president, Jerry Falwell Jr., invited students back to campus, even as COVID-19 ravaged the country. However, new reporting from HuffPost found that even in the weeks leading up to the controversy ― when other universities were keeping students abreast of the virus and encouraging caution ― Liberty gave little to no information to students, flouting CDC recommendations.

One student told HuffPost that Liberty’s lack of communication affected his understanding of the disease and its risks. He went on spring break to Florida in mid-March with friends but said he might have reconsidered the trip had his university treated the issue with any gravity.

“It’s easy to forget when you’re outside of a college how much of a bubble college really is,” senior Calum Best told HuffPost. “I generally view myself as a person probably above average information intake … even I wasn’t aware of the importance of social distancing.”

But it appears Liberty University barely communicated with faculty and students about the coronavirus until nearly two weeks into March. A faculty member said they received an email about study abroad cancellations on March 11. The next day, students received an email that the university’s typically large convocation would be livestreamed as a precaution. By contrast, at that time, the University of Virginia had already sent out more than a dozen updates about the virus to faculty, students and parents.

During the convocation, Falwell Jr. invited students to return to campus after spring break. University emails about spring break also mentioned nothing about the virus. They only contained the usual reminders about cleaning out dorms and fridges. When one Liberty parent helped move his daughter out at the end of spring break ― after it was made clear students had the option of staying home ― he asked a custodian in the dorm if they had received any guidance from the university on enhanced sanitation procedures. The custodian said they hadn’t, according to the parent.

“There was absolutely nothing about precautions to take during a global pandemic, even though these students were about to scatter to their homes across the country and go to spring break destinations like the beaches of Florida,” the parent, who wanted to remain anonymous because his daughter is still a student, wrote in an email to HuffPost. 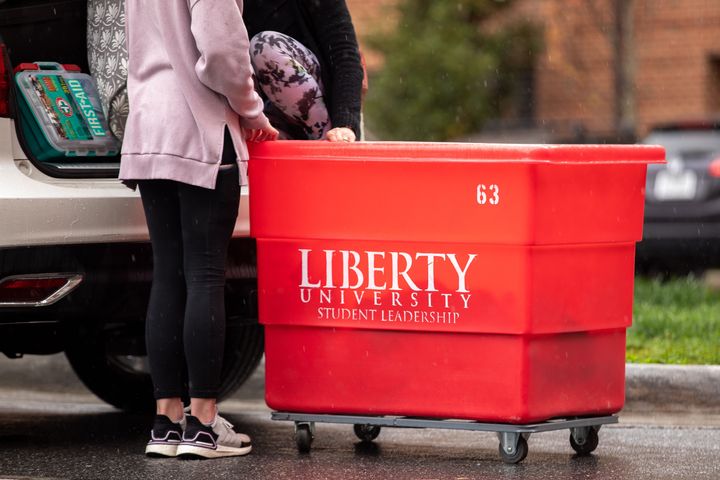 This parent had also previously reached out to the university about the lack of information sharing. Employees directed them to a university webpage with information about the coronavirus — created in January. However, the website was never disseminated to the larger community until much later, leaving people unaware of its existence, according to three Liberty community members.

For months, the webpage advised students to continue business as usual, noting that the virus was low-risk to Americans. On March 13, it was updated to say students could return to campus after spring break, though university-sponsored study abroad trips had been canceled, according to archived versions of the page.

A faculty member recalled getting generic emails from restaurants and businesses about staying safe, but hearing only radio silence from their university. The university did not respond to HuffPost’s requests for comment.

Falwell Jr.  has since gone on Fox News to speculate that the virus was a gift from China and North Korea designed to undermine President Donald Trump, and he has continually lashed out at his critics. He has backtracked and flip-flopped on a number of issues, including whether or not faculty should come to campus, despite classes going online. He also called a Liberty parent a “dummy” on Twitter.

In an opinion piece for Newsweek, he said the university was helping to fulfill its Christian mission by housing students who may have nowhere else to go, while taking steps to limit the spread.

“Misinformation tends to cloud things in a crisis. A lot of well-intentioned but misinformed observers have criticized our plans, though all along we have effectively adjusted to the requirements from Commonwealth of Virginia officials, which were changing by the day at the start of the crisis,” Falwell wrote.

As of March 29, more than 1,000 students are living on campus, although previously reported numbers were as high as 1,900, putting the school at odds with the larger Lynchburg community and the state of Virginia. The New York Times reported in late March that nearly a dozen students were already sick with symptoms similar to that of COVID-19, the disease caused by the virus. Liberty has since called the story “false and misleading﻿” and is now saying there are no confirmed cases among residential students — though an online student has tested positive, according to the Liberty Champion, the campus’s student newspaper.

The university has now taken a number of precautions to encourage social distancing, limiting dining services to takeout only and regularly sanitizing frequently visited areas. But Best, who remains on campus, said precluding college students on the same premises from seeing each other can have its challenges.

“There’s probably honestly 5% of people that are breaking social distancing, but even that is a problem that probably could be prevented with better communication and enforcement,” said Best, who is studying finance and accounting.

The Liberty parent ― a self-identified conservative, Christian and university champion ― said the entire fiasco makes it clear that Falwell is unfit to lead.

“He is completely untrustworthy to make decisions that impact the health and lives of thousands of people. As a Christian, I am commanded to forgive him. In time, I will. However, I am not commanded to trust him,” the parent wrote over email. “I believe that it is high time that the LU Board of Trustees remove Jerry Falwell Jr. and find a new president.”