Aware Super under pressure ahead of AGL coal split vote

One of AGL’s top shareholders says it is weighing climate and financial risks before deciding how to vote on the energy giant’s proposed demerger as healthcare workers call on it to reject the plan and push for earlier closures of coal-fired power stations.

With just five weeks to go until AGL investors vote on the board’s controversial plan to split its retail arm and carbon-heavy power plants into two separate businesses, tech billionaire Mike Cannon-Brookes has been ramping up efforts to convince shareholders to keep the company whole and bring forward its planned exit from coal-fired electricity in 2045 to as early as 2030. 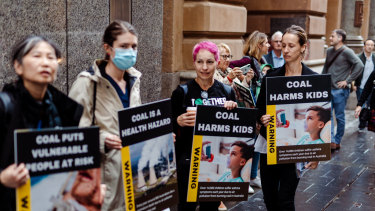 Dozens of public healthcare workers staged a demonstration in Sydney calling for investors to vote against the break-up of power giant AGL.Credit:Wanagi Zable-Andrews

Aware Super, a $148 billion superannuation fund that holds 1.4 per cent of AGL shares, said it was acutely aware that climate change was a material financial risk to its members’ retirement savings.

“It’s also an issue of particular concern to our members given a high proportion work in healthcare and other frontline roles – the first responders who frequently have to deal with the impact of climate change on the ground,” a spokesperson said.

“At the same time, we’re also conscious of the short-term financial risk associated with the debate over AGL’s demerger strategy.”

Aware said it was in talks with all key stakeholders including its fund manager, AGL and Cannon-Brookes’ Grok Ventures. “This will enable us to evaluate the strategy and exercise our vote at the appropriate time,” the spokesperson said.

The comments come as Aware Super was targeted by protesting public healthcare workers in Sydney on Thursday following a rally in which campaigners waved placards containing tobacco-style warnings highlighting the damaging health impacts of pollution from coal-fired power stations.

The group of health professionals, Healthy Futures, is concerned about coal’s emissions contributing to the frequency and severity of bushfires, drought and heatwaves, and raising the risk of allergic and infectious disease.

Dr Kim Loo, an Aware Super member and a council member of the Australian Medical Association in NSW, delivered a copy of the letter to Aware’s office building on Thursday, saying the demerger would be “disastrous” for public health because it would create smaller companies less able to access the funding to replace coal plants with renewables.

“To protect health everywhere, AGL and its investors must lead in enabling a swift and fair transition from fossil fuels to renewable energy,” the letter said. “AGL’s current demerger proposal shirks this responsibility and imperils public health. We urge you to vote against this proposal.”

Loo urged Aware to vote down the demerger at the company’s extraordinary general meeting.

“As a fund member of Aware for over 30 years, I will be watching to see if they do the right thing, keep their climate commitments and vote down the demerger of AGL,” Loo said.

AGL’s coal-and gas-fired power stations are the biggest sources of greenhouse gas emissions in Australia, accounting for 8 per cent of the nation’s carbon footprint. The company has resisted escalating pressure to exit coal by 2030, warning shifting too quickly to more weather-dependent renewable energy risked destabilising the market at times when it is not sunny or windy.

Laureate Professor Nick Talley, editor of the Medical Journal of Australia, said medical journals had increasingly highlighted the urgency of protecting public health from the impacts of climate change.

“To avoid the worst impacts on public health, it’s time for Australia’s biggest greenhouse emitters to heed the World Health Organisation’s call to replace coal with renewable energy by 2030,” he said.

AGL’s board insists the demerger will unlock value, creating a carbon-neutral retail and clean power company to be known as AGL Australia, which will be able to attract financial backers that are increasingly distancing themselves from fossil fuels. Meanwhile, the power generation offshoot – Accel Energy – will focus on transforming coal sites into energy hubs that could also house renewables and batteries.

The board last week released a scheme booklet outlining further details of the proposal which it has unanimously supported, and its independent expert report, which concluded it was in shareholders’ best interests.

“We encourage all our shareholders to read the material carefully when deciding how to vote,” AGL chief Graeme Hunt said on Monday.

Cannon-Brookes last week acquired an 11.3 per cent stake in AGL. Because the demerger vote requires 75 per cent shareholder support, he needs to convince another 14 per cent of the register to vote against the proposal for it to fail.

The Market Recap newsletter is a wrap of the day’s trading. Get it each weekday afternoon.