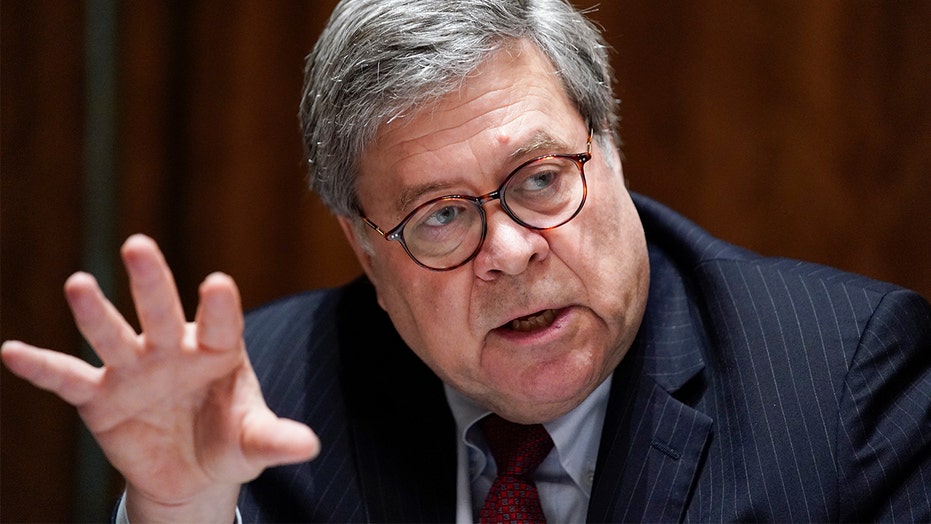 Attorney General Bill Barr clashed with Democrats on the House Judiciary Committee Tuesday over accusations that he is carrying out President Trump's political wishes, as he appeared for a long-awaited hearing where tensions also flared over protests and riots following George Floyd's death in police custody.

The hearing, originally scheduled for 10 a.m. local time, was delayed after committee chairman Rep. Jerrold Nadler, D-N.Y., was in a car accident. Nadler did not suffer any injuries.

Once the hearing began, Nadler did not hesitate to express his scorn for Barr and his Justice Department.

"Thank you for being here, Mr. Barr,” Nadler said with a note of sarcasm, pointing out that this was the attorney general’s first time appearing before the committee.

The chairman went on to claim that Barr and his department have "downplayed the effects of systemic racism" in the wake of Floyd's death and ongoing protests.

Addressing the department's approach to cases related to the Russia probe, Nadler summed up the DOJ's attitude by claiming that "the president’s enemies will be punished, his friends will be protected," no matter the cost, and saying that the DOJ's actions have caused "real damage to our democratic norms."

"In your time at the department, you have aided and abetted the worst failings of the president," Nadler said.

Ranking member Rep. Jim Jordan, R-Ohio, fired back in his opening that Democrats' hostility toward Barr is based on one thing: "Spying."

Jordan said that Democrats took exception to Barr accusing the Obama administration of spying on the Trump campaign, despite evidence that has come out revealing flaws in the FBI's process in acquiring a warrant to monitor former Trump campaign adviser Carter Page.

Jordan also pointed to evidence that the FBI engaged in questionable tactics in investigating Michael Flynn, whose criminal case the DOJ requested be dismissed.

Jordan then addressed the ongoing unrest in the U.S., showing a lengthy montage of media clips that began with reporters calling the incidents "peaceful protests" and then going into a string of clips of violence and fires in various parts of the country.

Barr, speaking next with his opening remarks, did not shy away from Democrats' accusations against him. He insisted that he acts independently of the president and that his goal is to make sure that everyone is treated equally under the law.

He emphatically stated that Trump "has not attempted to interfere" in decisions regarding the handling of criminal matters.

"On the contrary, he has told me from the start that he expects me to exercise my independent judgment to make whatever call I think is right," he continued. "That is precisely what I have done."

Barr also addressed the racial tension following Floyd's death. While acknowledging the tragedy, he defended the criminal justice system by arguing that in the past 50 years progress has been made and that any racism on the part of individual officers is not due to "some deep-seated racism generally infecting our police departments." He noted that "[p]olice forces today are far more diverse than ever before."

The attorney general responded by recent calls to defund police as "grossly irresponsible."

Barr also spoke out against "violent rioters and anarchists" that he said have "hijacked legitimate protests," specifically mentioning the ongoing unrest in Portland as an example.

The Trump administration has been blasted in the media for sending federal officers in to quell the unrest, but Barr defended the effort, arguing that these are not peaceful protests, but "an assault on the Government of the United States." He described the weapons that some demonstrators have been equipped with, and noted that a federal courthouse has been under siege.

The tension only escalated once the questioning began, with Nadler implying that Barr was using federal forces responding to unrest to provide material to aid Trump's campaign.

When asked if he has discussed the campaign with Trump, Barr answered sharply, stating, "I’m a member of the Cabinet and there’s an election going on, obviously the topic comes up," adding that “it shouldn’t be a surprise."

Nadler later accused Barr of using federal forces to provide Trump with footage for campaign ads. When Barr tried to respond and say that he was not using federal law enforcement to help Trump's campaign, Nadler spoke over him.

Later in the hearing, Barr got an opportunity to explain federal activities in Portland.

"Federal courts are under attack. Since when is it okay to burn down a federal court?" Barr said.

He said: "If someone went down the street to the Prettyman Court here, that beautiful courthouse we have right at the bottom of the hill and started breaking windows and firing industrial-grade fireworks in to start a fire, throw kerosene balloons in and start fires in the court, is that okay? Is that okay now? No, the U.S. Marshals have a duty to stop that and defend the courthouse, and that’s what we are doing in Portland. We are at the courthouse, defending the courthouse."

"We are not out looking for trouble."

Barr also had an opportunity to explain his positions in the Michael Flynn and Roger Stone cases, and launched an impassioned defense against the accusations that he has treated the president’s friends with particular and improper favor and gone after his enemies. 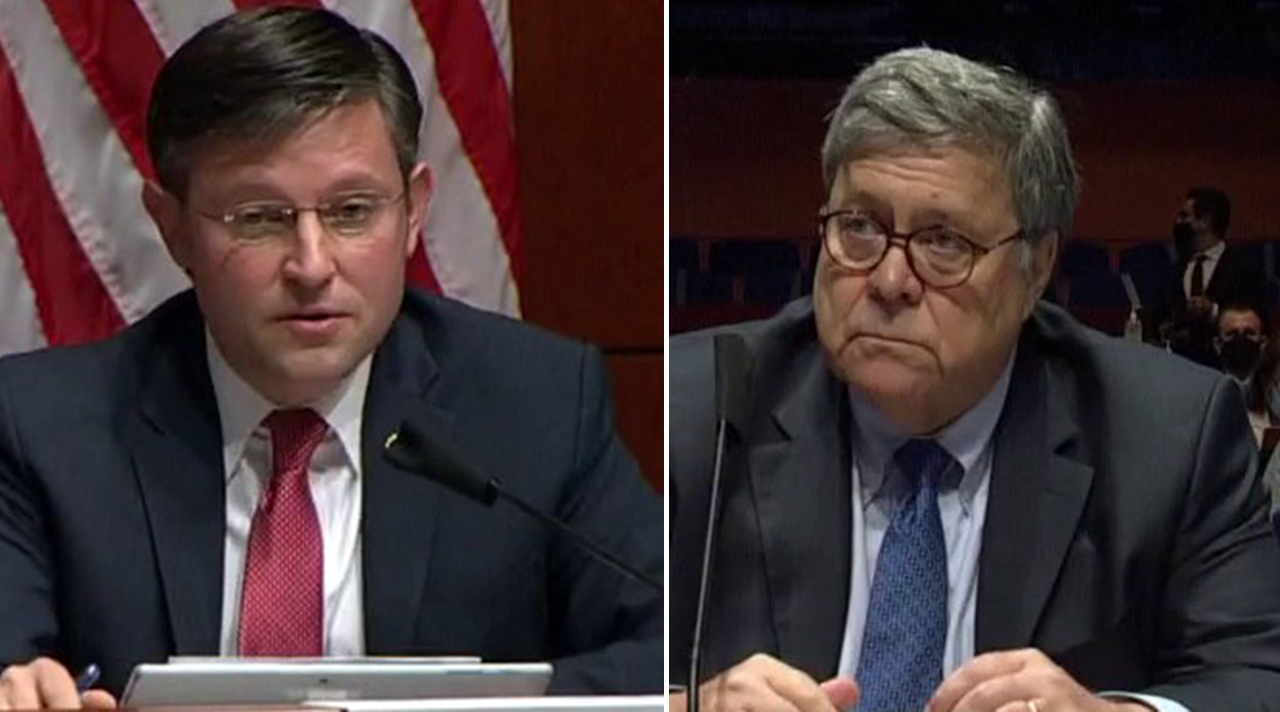 “What enemies have I indicted?” Barr asked.

He then turned to the cases involving Trump's associates.

"The cases that are cited, the Stone case and the Flynn case, are both cases where I determined that some intervention was necessary to rectify the rule of law, to make sure people are treated the same," Barr said.

"Stone was prosecuted under me. And I said all along I thought that was a righteous prosecution, I thought he should go to jail, and I thought the judge’s sentence was correct," he continued. "But the line prosecutors were trying to advocate for a sentence that was more than twice anyone in a similar position had ever served, and this was a 67-year-old man, first-time offender, no violence. And they were trying to put him in jail for seven to nine years. And I wasn’t going to advocate that, because that is not the rule of law."

Barr said: "I agree the president’s friends don’t deserve special breaks but they also don’t deserve to be treated more harshly than other people and sometimes that’s a difficult decision to make, especially when you know you’re going to be castigated for it.”

Later in the hearing, Barr touched on the Flynn case, noting that the case against him warranted dismissal in light of exculpatory evidence surrounding his initial FBI interview, which had recently become public. This included notes that indicated that federal agents may have been trying to get Flynn to lie so that he could be prosecuted.

"The interview was untethered to any legitimate investigation," Barr said.

Rep. Cedric Richmond, D-La., called into question Barr's claim that there is no inherent racism in the American justice system, pointing to Barr's own department as evidence to support his claim.

"The one thing that you have in common with your two predecessors, both Attorney General Sessions and Attorney General Whitaker, is that when you all came here and brought your top staff, you brought no black people," Richmond said. "That, sir, is systematic racism. That is exactly what John Lewis spent his life fighting."

Early in his opening statement, Barr paid his respects to Lewis, who was a champion of civil rights. Richmond did not appreciate the kind words.

"You really should keep the name of the Honorable John Lewis out of the Department of Justice's mouth," Richmond said.

Richmond also brought up an issue that Democrats have raised, regarding whether or not the president would leave office if he loses November's election. Trump himself has refused to state whether he would accept the election results, claiming that the election would be rigged by a Democratic push for mail-in voting.

When asked if an election result could be contested, Barr pointed to 2000's Gore v. Bush, in which the Supreme Court had to intervene before an outcome was finalized. When asked if the president could contest the election if the result is not close, Barr said, "Not that I'm aware of."

Barr said that he has no reason to believe that the election will be rigged, although he did state that mail-in voting exposes the system to a high risk of fraud.