Even for those who know how to clean a bathroom and cleaning a kitchen is top of your daily to-do list, black mould may still be a challenge you need to deal with. That’s because black mould is a symptom of a damp problem – which is also one of the causes of cracks in walls and is cited as one of the most undesirable home decor features that put home buyers off. To help homeowners, cleaning experts have shared how to get rid of black mould with white vinegar being the key solution.

Using bleach to kill mould is one of the most common DIY solutions to the appearance of black mould in homes, but it’s not always the best or the only one.

As well as natural solutions, such as cleaning with white vinegar and lemon juice, people can buy mould-busting sprays that use chemicals to tackle the issue. But be advised, getting rid of black mould is only the first step to ensuring a house is mould-free for good.

Robert Vaughn, Managing Director of Damp Detectives explained: “Mould is caused by damp, whether on a surface or a damp environment.

“You can clean it off as many times as you like but new mould will continue to form whilst the damp problem exists. Therefore, the best way to combat mould and damp is to locate the source.” 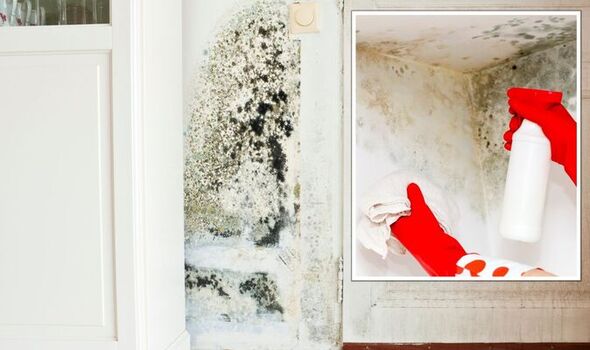 How to get rid of mould in homes

1. Decide if you can get rid of black mould yourself

Whether homeowners can do a DIY clean-up of black mould, or need to employ a damp and mould professional, will depend on the size of the problem.

Experts advise Britons to only do the job themselves if the area affected is less than 10 square feet.

Homeowners may want to consult a professional if they have health problems, if they think their home’s heating, ventilation or air-conditioning system may be contaminated with mould, or if the black mould covers an extensive area.

2. Getting rid of black mould with soap

The jury is out on whether soap and water, bleach and chemical treatments, or natural cleaning solutions such as white vinegar are the best way to get rid of black mould. But most experts agree that the first step in dealing with the problem is a simple wash and scrub-up.

Robert said: “If you have surface mould on walls or surfaces you can clean it off with a soapy solution and flush the mould away.

“Don’t use bleach or other chemicals which can cause health problems on their own.”

3. Get rid of black mould with white vinegar

This is a tip from Sara San Angelo, who is known professionally as The Cleaning Lady recommended using white vinegar for areas of mould found on porous surfaces. 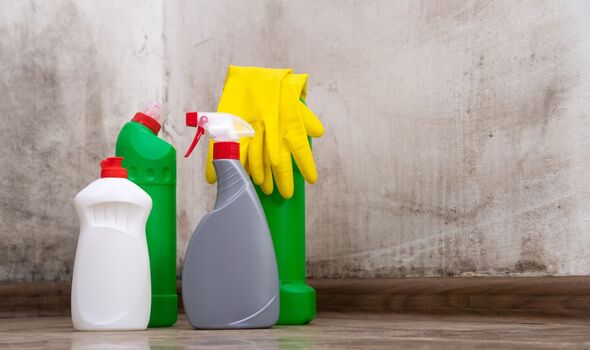 She said: “Bleach will kill mould spores growing across a hard surface, but if the mould has extended below the surface, then white vinegar is the best choice.

“The vinegar will penetrate to kill the mould and mildew at the root, preventing it from regrowing.”

Cleaning experts at Merry Maids agreed with using white vinegar to banish mould. They explained: “While a significant mould infestation is best handled by a professional company, you have a powerful weapon against occasional mould growth in your kitchen cupboard: white vinegar.

“This humble household staple can kill more than 80 percent of mould species, including hazardous black mould. 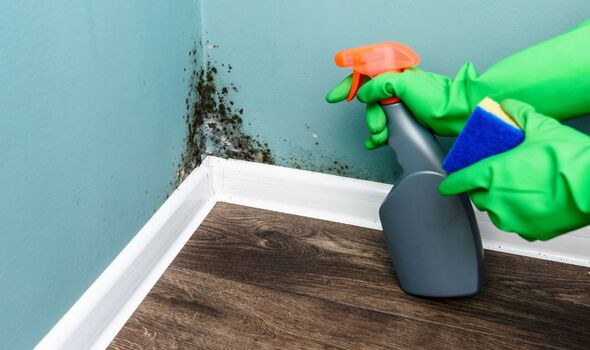 “In fact, it’s more effective than bleach, which only kills surface mould and can actually make matters worse.”

White vinegar is most commonly found with five percent acidity and works best undiluted, so don’t worry about mixing it with water first.

However, because it is a mild acid, avoid using vinegar on aluminium, cast iron, waxed wood, or natural stone, as it may damage or cause etching in the finish.

Direct contact with mould can be dangerous, especially if any spores become airborne during the cleaning process. Additionally, vinegar’s acidic nature can be irritating to the skin. For safety’s sake, wear non-porous gloves, goggles or safety glasses, and a mask that covers your mouth and nose.