Biden takes aim at Trump after presidential debate, tells crowd it 'was supposed to be about you' 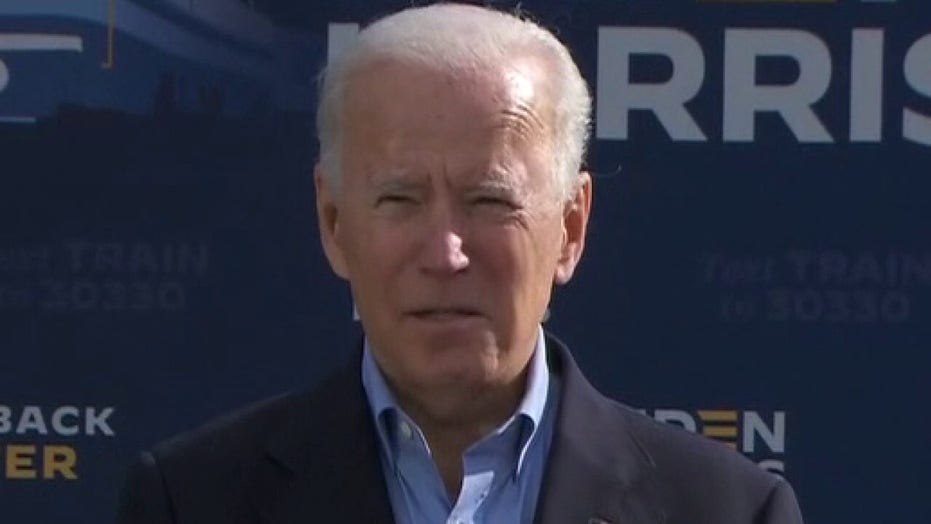 Joe Biden: Does your president understand what you’re going through…or just ignore you?

CLEVELAND – In his first public event since trading fire with President Trump at a very combustible presidential debate, Democratic nominee Joe Biden told the crowd the president “lies to you” and emphasized that his showdown with Trump “was supposed to be about you.”

The comments from the former vice president, who for decades commuted daily on Amtrak from his home in Delaware to the nation’s capital, came as he kicked off a daylong tour through eastern Ohio and western Pennsylvania, two crucial battleground states that will likely help decide the winner of the presidential election.

“Last night’s debate in this election was supposed to be about you … all the people who make the difference,” Biden said Wednesday morning at a campaign event in Cleveland, minutes before launching his train trip.

Tuesday night’s debate in Cleveland was considered the ugliest in modern history, with repeated interruptions and both candidates hurling charges and insults at each other. But while the president exclusively spoke directly to Biden or to the moderator – "Fox News Sunday" anchor Chris Wallace – the former vice president repeatedly pivoted and looked directly into the camera as he spoke to American voters. 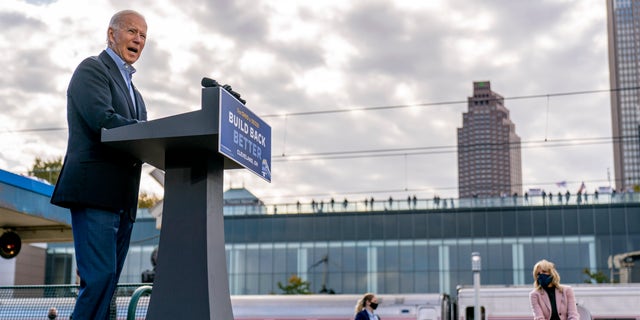 As he kicked off his train tour, Biden once again painted a picture of the president as a wealthy billionaire out of touch with average Americans.

“Does your president understand at all what you’re going through? What so many other people are going through? The question is, Does he see where you are and where you want to be? Does he care? Has he tried to walk in your shoes to understand what’s going on in your life or does he just ignore you?” Biden asked.

And Biden reprised an attack line he’s used in recent weeks, spotlighting his working-class upbringing in Scranton, Pennsylvania and contrasting it with Trump’s upbringing among wealth and privilege.

“I look at things from a Scranton perspective. He looks at it from Park Avenue. And I think he looks down on us. He judges us,” Biden argued.

Biden was introduced by Tiffany Davis, a fifth grade elementary school teacher and cancer survivor from Girard, Ohio, whose husband now commutes each week to a General Motors plant in Bowling Green, Ky., after the nearby Lordstown, Ohio, GM plant closed down a year and a half ago.

Trump was able to tap into the angst of workers at the Lordstown plant and others in the state in 2016 as he won Ohio by eight points over Democratic nominee Hillary Clinton.

At a rally in nearby Youngstown, in 2017 Trump promised residents that manufacturing jobs would be returning and told the crowd, “Don’t move. Don’t sell your house.” But Trump wasn’t able to keep GM from closing the plant during his presidency.

Biden on Tuesday charged that the president “lies" to them. "He lies to you about exactly what’s happening … He said, 'Don’t move, don’t sell your house because no Ohio factory will shut down in Donald Trump’s America.'”

And he claimed that Trump, “in his four years as president, he’s broken his promise. He’s forgotten the forgotten Americans he always said he was going to fight for.” 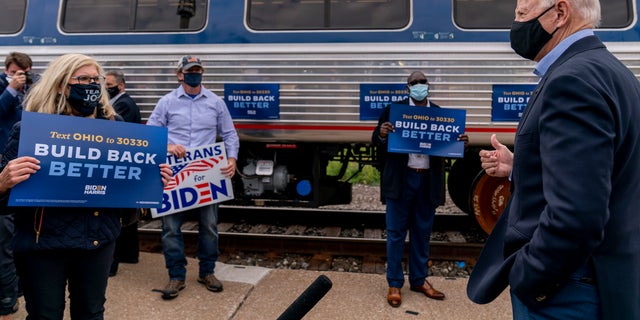 Biden said that during his train tour, he’d be “talking to the folks" about how he will "get the virus under control, lay out the plan, bring Congress together provide relief and resources to schools and businesses so we can reopen our economy and safely and strongly with a real a plan and real leadership.”

Looking back to his days commuting on Amtrak during his nearly four decades representing Delaware in the Senate, Biden spotlighted, “I’ve logged more than 2,100,000 miles on Amtrak.”

Pointing to his Wilmington, Del., to Washington, D.C. commute, he said: “I took that 250 mile roundtrip journey each day. I’d get to know the train engineers, conductors, the fellow passengers.”

Biden, who was known as “Amtrak Joe” during his Senate years, greeted supporters and Amtrak employees as he boarded the train. He also acknowledged a small group of supporters who were standing on top of a building across the train tracks.

After departing Cleveland, Biden and his wife Jill stopped in Alliance, Ohio. The train was then scheduled to make stops in western Pennsylvania, in Pittsburgh, Greenburg, New Alexandria, Latrobe and Johnstown.

An average of the latest public opinion polls in Ohio compiled by Real Clear Politics shows Democratic presidential nominee Joe Biden with a 3.3 point edge over the president. That includes a Fox News poll conducted Sept. 20-Sept. 23 and released last week that had the former vice president topping Trump 50% to 45% among likely voters in Ohio.

An average of the latest polls in the key battleground state of Pennsylvania compiled by Real Clear Politics indicates a close contest – with Biden edging the president by 5.7 points. The new average includes a Fox News poll released Thursday that showed the former vice president with a seven-point lead over Trump.

Pennsylvania – along with Michigan and Wisconsin – had been carried by the Democrats in presidential elections for a quarter-century. But Trump narrowly edged Clinton in all three states four years ago, helping him win the White House. An average of the final polls on the eve of the 2016 election gave Clinton with a 2.2 point edge over Trump in the Keystone State, but Trump edged the Democrat by seven-tenths of a percent to capture Pennsylvania’s 20 electoral votes.