"Martha, check six – Mark? Buzz – over 100 jet hours in Arizona," the 90-year-old wrote on Twitter on Saturday. "12 o’clock is straight ahead. 6 o’clock is behind. Fighter pilots understand what 'check six' means in FTR lingo talk. Martha, wave as you move ahead past Mark, to 12 o’clock, and you win for Arizona!"

Aldrin is best known for piloting the Apollo 11 Lunar Module in 1969. Aldrin and fellow astronaut Neil Armstrong were the first two humans in history to walk on the moon. Aldrin is also a retired Air Force pilot and Korean War veteran.

"Absolute honor to have the support of hero astronaut Buzz Aldrin in this mission!" McSally responded. "We must hold this seat, the Senate, and save the country. It's a dog fight, and as we fighter pilots say: Fight's On!"

Aldrin doesn't appear to be one of McSally's constituents, however — he was living in Satellite Beach, Fla., as of 2018, according to Florida Today.

Three other former astronauts endorsed McSally ahead of the special election. 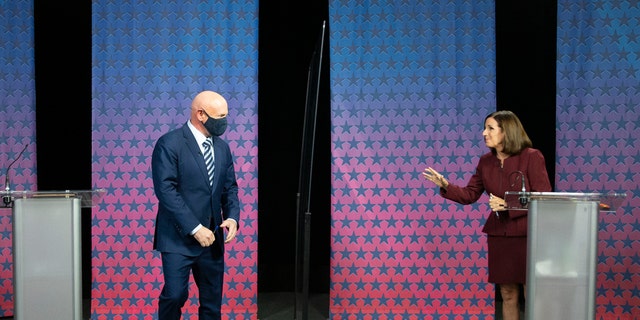 "As former fighter pilots and test pilots, we know what it takes to get in the cockpit of a fighter jet for a test flight or combat: incredible determination, strength and grit," former astronauts Tom Stafford, Charlie Duke and Jack Lousma wrote in an Oct. 1 op-ed published in The Arizona Republic. "That’s why we support Sen. Martha McSally. As the first woman in U.S. history to fly a fighter jet in combat and command a fighter squadron, she broke barriers in the Air Force and the military."

Fox News' inquiry to Aldrin's spokesperson was not returned at the time of publication.