Since 2016, the U.S. Food and Drug Administration has sought to crack down on fruity, sweet-flavored e-cigarettes that hook teenagers on nicotine.

But at least 20 brands continue to sell China-made disposable devices with kid-friendly flavors such as "peach blueberry candy" and "pineapple strawnana" at liquor stores, smoke shops and convenience stores in the United States, Reuters has found.

Flavored disposable vaping devices account for one-third of U.S. e-cigarette sales, up from less than 2% three years ago, according to a Reuters review of retail sales data. Their surge raises questions about the public health agency’s failure to rein in the booming flavored e-cigarette market and its ability to enforce its own rules, some critics say.

Findings by Reuters are drawn from a dataset produced by IRI, a Chicago market research firm that uses scanner data and other information to track retail purchases. The IRI dataset, which measures purchases from Jan. 12, 2014, to June 12, 2022, provides a rare look at the rise of disposable flavored-nicotine devices following the FDA’s crackdown on Juul Labs Inc, 35%-owned by Marlboro maker Altria Group Inc.

AS FDA BANS JUUL VAPE PRODUCTS FROM US MARKET, DOCTORS AND CRITICS WEIGH IN

The data shows for the first time that consumers spent more than $2 billion on the new generation of disposable e-cigarettes over the past year, surpassing Juul's once-leading market share by about 3 percentage points since March.

The data was shared with Reuters by an individual outside IRI, who declined to be identified. An IRI spokesperson said the company is "unable to confirm any information you’ve received from an outside source" and that the figures should not be attributed to IRI. According to a 2019 IRI press release, IRI measures purchases at retailers including more than 30,000 convenience stores.

The FDA said in written responses to questions that it is "deeply committed to addressing the ongoing public health concerns around youth e-cigarette use" and "is constantly monitoring the changing marketplace." (Graphic: https://tmsnrt.rs/3zNHvXP)

The FDA in January 2020 banned all flavors except tobacco and menthol in Juul and other cartridge-based e-cigarettes. In June, it sought to ban the sale of all Juul e-cigarettes. The agency has since put its order on hold, saying "there are scientific issues unique to the Juul application that warrant additional review."

Juul referred Reuters to previous statements saying it wants no underage consumers to use its products and that it looks forward to "re-engaging with the FDA" while the ban is on hold.

Sweet-flavored, disposable e-cigarettes began flooding the market in 2020, trying to capitalize on the former popularity of Juul's cartridge-based device. Both varieties vaporize a liquid that contains nicotine, the addictive chemical that gives smokers a rush. Both contain roughly equal concentrations of nicotine.

Disposable devices, which are pre-filled and priced at $15 to $25, can have five to 20 times the amount of liquid as a Juul cartridge, based on visits Reuters made to nine retailers selling both. Some products advertise that a user can take thousands of puffs of a single device. In contrast, a Juul, priced at roughly $10, requires users to add separate cartridges, or pods, of nicotine-laced liquid, priced at $20 to $25 per four-pack. 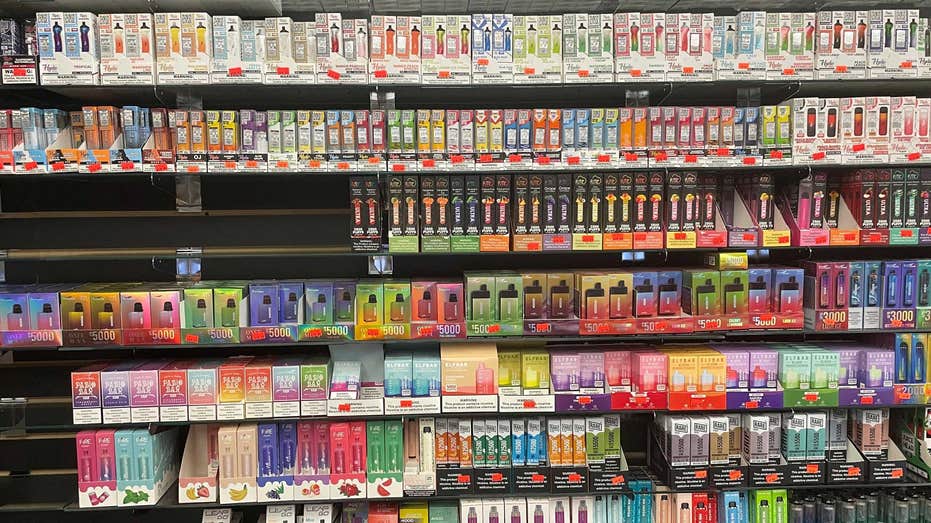 So-called “candy” vapes, such as these seen in a store in Raleigh, North Carolina, on June 23, 2022, are taking the place of flavored JUUL pods after U.S. regulators banned them in 2019. ( REUTERS/Arriana Mclymore/File Photo / Reuters)

Three brands – Kangvape Onee Stick, Esco Bars and Breeze Smoke Breeze Pro – rang up weekly sales of more than $3 million apiece as of June 12, according to the data.

Representatives of Esco Bars and Breeze Smoke said their products contain synthetic nicotine, a version of the addictive drug that is not derived from tobacco plants and was not under FDA's jurisdiction until Congress acted earlier this year. Both companies told Reuters they applied for FDA authorization in 2022.

The FDA declined to disclose the names of synthetic nicotine products that applied.

Darrell Suriff, CEO at Pastel Cartel, the Texas company that makes Esco Bars, said it spent nearly $3 million preparing applications to the FDA. Firms like his that try to follow the rules should not be penalized, he said: "There's a lot of bad players in the industry … We're not one of them."

Jon Glauser, chief strategy officer for Hyde, in Buffalo, New York, another disposable brand with synthetic nicotine and sales of nearly $3 million per week, said he understands critics' concerns that sweet-flavored e-cigarettes appeal to teens, potentially addicting them. But adults "really do like flavors," he said.

Representatives at privately held Shenzhen Kangvape Technology Co did not respond to requests for comment.

Juul popularized e-cigarettes among teenagers starting in 2017. Juul's cachet with teens faded after 2019 when it pulled mango, mint and fruit flavors under regulatory pressure, leaving room for dozens of other brands to step in. As sales of flavored disposable devices have soared, Juul's U.S. market share fell to about 30%, from more than 70% in 2018 and 2019, according to the data.

At Luxury Tobacco & Vape in Raleigh, North Carolina, a display for disposable Elf Bar recently offered more than a dozen flavors such as sour apple and rainbow candy. Juul occupied just a fraction of the shelf. Juul declined to comment on the display. Elf Bar did not respond to requests for comment.

HOW TO QUIT VAPING AS THE E-CIGARETTE FAD FIRES UP: 6 SMART STEPS TO TAKE

According to FDA rules, e-cigarettes cannot be sold in the United States unless their makers submitted scientific applications by September 2020 demonstrating why their products benefit public health. E-cigarettes containing synthetic nicotine had until May 14, 2022, to apply.

Reuters provided the FDA with a list of more than two-dozen flavored devices that the news agency found in stores and online, even though they were not on an FDA list of products that filed applications by 2020. (Graphic: https://tmsnrt.rs/3Qcf7nq)

The FDA declined to answer questions about whether the products Reuters identified had applied for the required authorizations.

An FDA spokesperson pointed to the agency's website, which stated: "Our compliance and enforcement work is a multi-step process that cannot happen overnight."

Mitch Zeller, who retired in April as the director of FDA's tobacco unit, told Reuters there could be gaps on its list because the FDA needed cooperation from applicants in order to publicly list them.

"Is FDA going to catch every single violation of the statute? No," Zeller said, though he said targeting manufacturers that have not applied is FDA's "number one priority."

The agency said on its website on Aug. 3 that "it is illegal" to sell any e-cigarettes using synthetic nicotine without its authorization. As of Aug. 15, the FDA had not granted authorization to any of them.

Alex Morrin, 19, used Juul starting in 2017 when he was a high school freshman in the Tampa, Florida, area, drawn to its "fruit," "creme" and "mint" flavors. After Juul eliminated those flavors, Morrin began buying fruity, sweet-flavored disposable e-cigarettes, such as Cali Plus and HQD Cuvie Plus, made by Cali Pods and HQD Tech USA, both based in Florida. "They just tasted better, and there were more flavors," he said. "They’re still all out there, and easy to get."

Cali Pods and HQD did not respond to requests for comment.

After he began using e-cigarettes, he suffered headaches and nausea, then seizures that sent him to the hospital six times between January 2020 and last November. Morrin and his mother, Winna Morrin, said he had never experienced seizures before his e-cigarette addiction. Winna Morrin provided hospital records corroborating the seizures. Researchers have established no definitive link between vaping and seizures.

The FDA told Reuters it is seeking to understand whether the devices' "nicotine content or formulation may contribute to seizures." Most reports of seizures from e-cigarettes come from youth, or young adult, users, the FDA said.