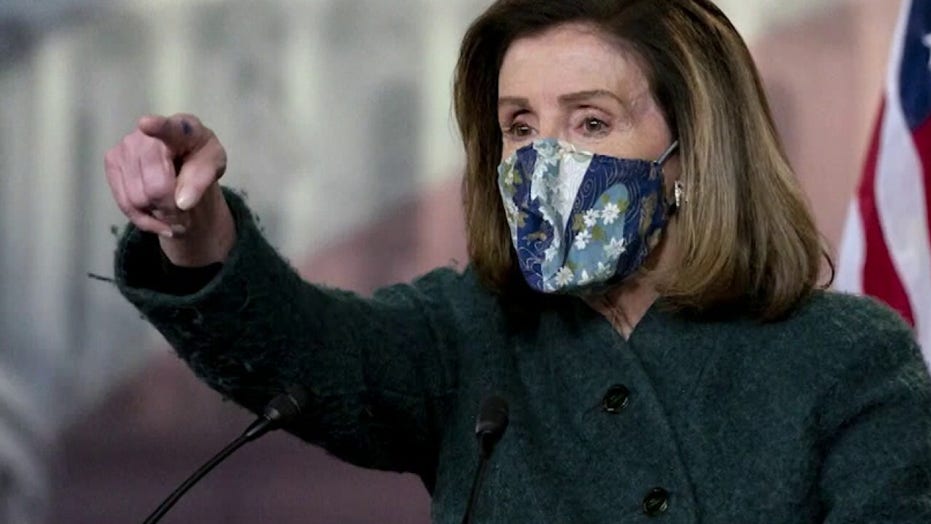 Rep. Nancy Mace R-S.C., joins ‘The Next Revolution’ to discuss the latest congressional controversy, future of the GOP.

EXCLUSIVE – Capitol Police in a Wednesday letter said there is “no current investigation” into Rep. Russ Fulcher, R-Idaho, despite a Feb. 17 report saying police were investigating the congressman for pushing past an officer on his way through a metal detector.

HuffPost reported that the congressman had “manhandled” a Black female officer while going through a metal detector, and that police were investigating the incident, citing a firsthand account from reporter Matt Fuller and a phone call with Capitol Police explaining the incident.

House Speaker Nancy Pelosi implemented new rules requiring members of Congress to enter the Capitol through metal detectors — which GOP lawmakers opposed — or else face heavy fines, after the deadly Jan. 6 Capitol riot, saying in a statement that the changes were necessary to keep those work in the Capitol, including the Capitol police, safe.

Fulcher said that when he passed through one such metal detector on Jan. 12, he “stutter-stepped around one of the police officers” and doesn’t “believe there was any touching at all.”

Capitol Police told Fulcher in a meeting and in a letter obtained by Fox News that he was not under investigation.

“… To the Department’s knowledge, there is no current investigation into an alleged or rumored incident occurring on or around the House Floor on January 12, 2021 involving Congressman Fulcher,” Capitol Police Chief of Staff Salley Wood wrote in the letter to Fulcher. “We believe this concludes this matter but please let me know if you have any questions.”

Capitol Police did not respond to emails and voicemails from Fox News.

The initial HuffPost report was based on a firsthand account from Fuller, who tweeted on Jan. 12 that “Russ Fulcher … pushed his way through” metal detectors put in place at the Capitol after the Jan. 6 riots. “He went through the metal detector, set it off, ran into a cop, and then pushed his way past her,” Fuller tweeted.

The next day, on Jan. 13, Fulcher responded to the tweet with a statement, calling the Capitol Police “heroes” and saying he continues to “support and thank” officers for their work.

“I, and other [House] members, communicated to the Sergeant at Arms that we would not be participating with the new screening procedure until we knew House rules were followed,” Fulcher said in a series of tweet. “Lastly, I am unaware of any rude interactions between members and capitol police.”

Responses to Fulcher’s statement accuse the congressman of “gaslighting,” “lying,” and calling on him to resign.

About a month later, Fuller reported that Capitol Police “were investigating the matter,” and that the involved officer did not want to speak to the press and “appeared to be shaken from the interaction.” He said in a Feb. 17 tweet that Capitol Police called him “for an interview” that he described as “pretty cryptic,” saying they had two “ongoing” investigations into members of Congress including Fulcher.

“The best way to describe what Fulcher did was he ‘manhandled’ the officer, a Black woman who was significantly smaller than the congressman,” the report states. Fox News reached out to Capitol Police via phone and email at the time and received no response.

The journalist added that he attempted to ask the officer about it later, “and while she wouldn’t say anything, she nearly had tears in her eyes.”

“We stand fully by Matt’s firsthand reporting, which included witnessing Congressman Fulcher grab an officer with both hands and push past her, and being told by multiple Capitol police officers that Fulcher was under investigation at the time,” Matt Mittenthal, spokesperson for HuffPost, told Fox News.

Fulcher said a GOP meeting was held after the Jan. 12 incident, which including a briefing with House of Representatives Acting Sergeant at Arms Timothy Blodgett, a National Guard major general, and Capitol Police Chief Yogananda D. Pittman.

“I thanked them for their service every day, said I appreciate them greatly, and [said] there have been media reports, both national and local, about certain members…[under investigation],” Fulcher said, adding that authorities told his office the first time he reached out about the allegations of an investigation that the Capitol Police do not comment on investigations.

Fulcher said that Republican Illinois Rep. Rodney Davis, ranking member of the Committee on House Administration, then asked Pittman whether there were any investigations into members of Congress at the time, and the police chief said no.

The congressman said he went up to Pittman later, asked for confirmation that there was no investigation in writing, and she agreed.

Fulcher went on to describe the inclusion of metal detectors, razor wire and the continued presence of the National Guard in downtown D.C. as an “effort to communicate this false narrative to the world about how [Congress] members are a threat to other members.”

“This is so political,” Fulcher said of the report and of media bias in general. “There is a partnership. It’s my third year here now, and it’s evident. There is a partnership between many of my colleagues across the aisle and mainstream media. And they are jointly using events since January to communicate this false narrative to the world that it’s the Republicans and people who have an affiliation with Trump that are the cause of all this fear and damage.”

HuffPost spokesman Mittenthal said the outlet will not be updating its initial report.