COVID-19 vaccine makers stand to gain as much as $US190 billion ($245 billion) in sales this year if they hit production targets, with two Chinese companies accounting for at least a quarter of the revenue.

The estimate from science analytics company Airfinity sheds new light on how nine companies including US-based Pfizer and Moderna, along with China’s Sinovac Biotech and Sinopharm Group, will share in the market for COVID shots. Production constraints and shortfalls will likely bring the final 2021 sales numbers closer to a range that tops out at $US115 billion, the research firm said. 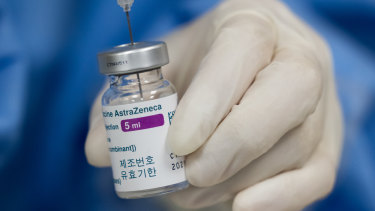 Developed in record time, COVID-19 vaccines help save lives – and generate big sales for their producers.Credit:Bloomberg

Developed in record time and often heavily supported by government funds, COVID-19 vaccines are helping countries save lives, restore societies and avert trillions of dollars in potential economic costs. Access to the doses for many lower-income countries, however, remains hampered, in part because of costs and wealthier countries cornering doses.

“This was a market that didn’t exist a year ago,” Rasmus Bech Hansen, Airfinity’s chief executive officer, said in an interview. “These are very significant numbers, and it’s also why not all countries have been able to secure the necessary supplies; because it does require quite a sizable investment to vaccinate your whole population.”

The revenue forecasts depend on price and whether companies achieve their production and delivery goals, where some have already faced challenges. Actual 2021 production may be as much as 42 per cent less than the levels forecast by the companies, which would leave revenue as low as $US97 billion, the researchers said.

“We still expect to be at a run rate of approximately 2 billion doses per year by the end of 2021 and throughout 2022,” a spokeswoman said in an email.

China is playing an influential role in immunising the world, at least for now, shipping more doses overseas than all other nations combined as India grapples with a devastating outbreak that has shut down exports of shots. Sinovac could reel in as much as $US25 billion and Sinopharm as much as $US23 billion, with each attracting at least $US16 billion, the data show. The sales indicate that China sees an opportunity to gain a business advantage in addition to a geopolitical edge.

“We’ve seen Chinese exports interpreted as a policy tool, but the actual revenue has been overlooked,” Bech Hansen said. “The pricing of the Chinese vaccines hasn’t been that low.”

Sinovac and Sinopharm vaccines are estimated by Airfinity to cost $US12 and $US23 a dose. The Chinese companies declined to comment. AstraZeneca, which has pledged not to profit from its shot during the pandemic, is charging $US3.50 to $US5.25 a dose, compared with a Pfizer price of $US12 to $US14.50 and Moderna’s prices ranging from $US18 to $US32, the analysis firm estimates.

A lack of detail on the contracts makes it difficult to predict sales, with pharma companies often using tiered pricing models that charge countries based on their income levels.

Pfizer and Moderna could account for as much as $US44 billion and $US32 billion, respectively, though the figures are likely to be lower. Pfizer has forecast sales of $US26 billion this year for its vaccine developed with BioNTech, while Moderna sees revenue of about $US19 billion.

High prices also could put doses out of reach to many people in lower- and middle-income nations. The uneven distribution has increased pressure on wealthy countries to share excess shots and step up financial contributions to try to close the access gap. Group of 20 leaders including China and the US have called for greater global cooperation to defeat the virus, and drugmakers including Pfizer last week pledged to get more vaccines to poorer countries over the next 18 months.

Investing $US50 billion could help immunise at least 40 per cent of the global population by the end of this year and 60 per cent or more by the first half of 2022, the International Monetary Fund said last week. Meanwhile, companies are enjoying a windfall that in many cases has been underwritten by hefty government subsidies.

“The profits we’re seeing are magnitudes larger than what it would cost to fully vaccinate the poorest countries in the world,” said Anna Bezruki, a Global Health Centre researcher at the Graduate Institute of International and Development Studies in Geneva.

“It’s not that these profits are necessarily bad or prices are completely unreasonable. It’s more a question of who is getting access.”