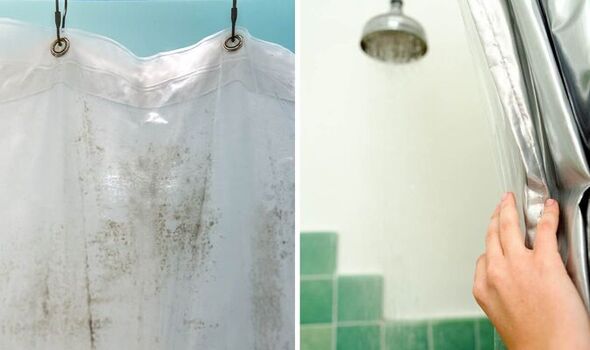 Mould is a common problem around the house in winter but it can be a year-round nuisance when it comes to the bathroom. Humidity and condensation are impossible to avoid entirely after a hot, steamy shower, and it is just as difficult to keep supposedly water-proof curtains free from nasty fungus spores. However, according to cleaning experts, there are a few things you can do before, during and after showering to limit mould and mildew growing on the material.

How to prevent mould on a shower curtain

Regular cleaning is often the key to most household dirt dilemmas, but according to one expert, it’s not the most important step to keep the lining free from mould.

Maeve Richmond, organization expert and the founder and coach of Maeve’s Method said: “It’s less about cleaning and more about letting them dry properly.”

She explained that to do this, you need to actually move the curtain away from the edge of your bath or shower, and allow it to spread out.

Maeve added: “If you think about it, if a wet curtain is smushed, then there’s just water sitting in there all day long. So mould can grow.”

Of course, your shower curtain will inevitably get wet when the bathroom is in use, but they’re not designed to stay scrunched up. According to Maeve, they’re actually designed to stay “splayed out”.

To do this, she recommended opening it up after showering by leaving the liner inside the bathtub and placing the curtain side on the exterior.

Not only does this mean that “air can flow in between the two” but also prevents the musty odour caused by pools of bacteria on the bottom of the material.

Mave added that opening windows inside your bathroom “will speed that drying process up”.

Preventative measures will only work if the material you’re using is fit for purpose in the first place.

Though there are several types of shower curtains to choose from, including silk and satin, Mave explained that “the simplest material to work with is plastic”.

It is easy to clean, durable and won’t wrinkle, plus it is quick to dry thanks to its thin texture. However, if you are looking for a more eco-friendly alternative, canvas does well around water and will keep its shape.

However, Maeve warned that it’s not completely waterproof so you will need to use a shower liner to “keep it as dry as possible”.

If you have a recurring issue with mould even after drying your shower curtain, you may need to increase the cleaning frequency to eliminate the root of the fungus spores.

You don’t need to overcomplicate this process either, in fact, it is often as easy as spritzing the material every “once in a while”, according to Maeve.

She explained that a homemade solution of baking soda, white vinegar and water will suffice to take care of both existing, and developing mould.

Maeve added: “If the stains or mould are tough, take the curtain down and machine wash it (if you can) or just soak the yucky parts in a bucket or your sink in a cleaning solution of your choice.”

When all else fails, you may need to replace the shower curtain to eliminate the mould issue.

The Mave’s Method founder noted that while a good one will last around five years with the right care, rips, stains and heavy use will only make matters worse.

Fortunately, they are generally an inexpensive item to replace and are a great opportunity to invest in a more mould-resistant material.